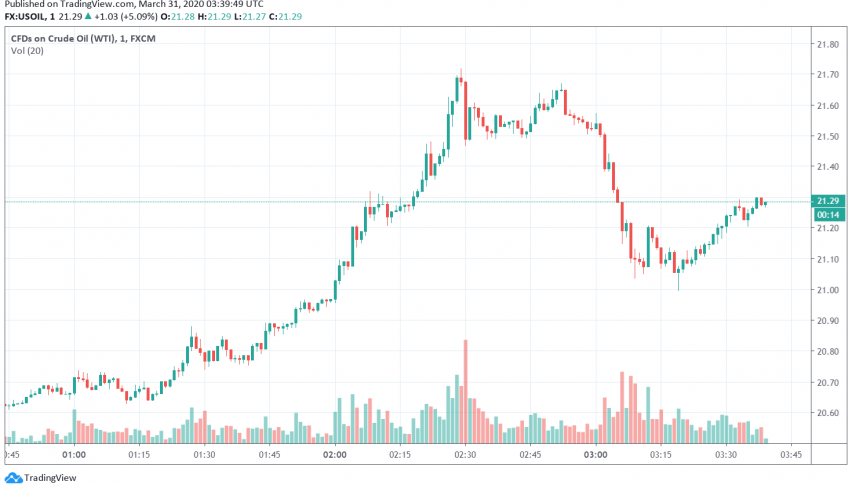 On Tuesday, WTI crude oil prices have tumbled to multi-year lows over the deteriorating sentiment in oil markets because of the escalating coronavirus pandemic even as the price war between Saudi Arabia and Russia simmers. At the time of writing, WTI crude oil is trading at around $21.28 per barrel, after having fallen below the $20 level briefly.

Crude oil prices have been on the decline as a result of the coronavirus outbreak which has driven demand for oil lower due to the lockdowns and travel restrictions being enforced by several countries around the world. Oil markets received an additional blow a few weeks ago after Russia refused to cooperate with OPEC on deepening crude production curbs.

This move prompted Saudi Arabia to announce that it would hike supply and cut its official selling price to flood the markets with cheap oil, even as demand worries dominate. Despite the US attempting to intervene and resolve the conflict, Saudi Arabia and Russia have so far failed to make any breakthrough, with neither side showing interest in resuming talks with each other on the issue.

Saudi Arabia’s move is expected to hit not only Russia but other oil producers like the US, Canada and China, which would have no choice but to curtail production as they will not be able to match the low prices of the world’s leading oil producer. Meanwhile, analysts anticipate a decline in global oil demand by as much as 20% this year because of the continued lockdowns and restrictions in place.

Gold Violates Symmetrical Triangle Pattern - Is It Going After $1,785?
1 day ago