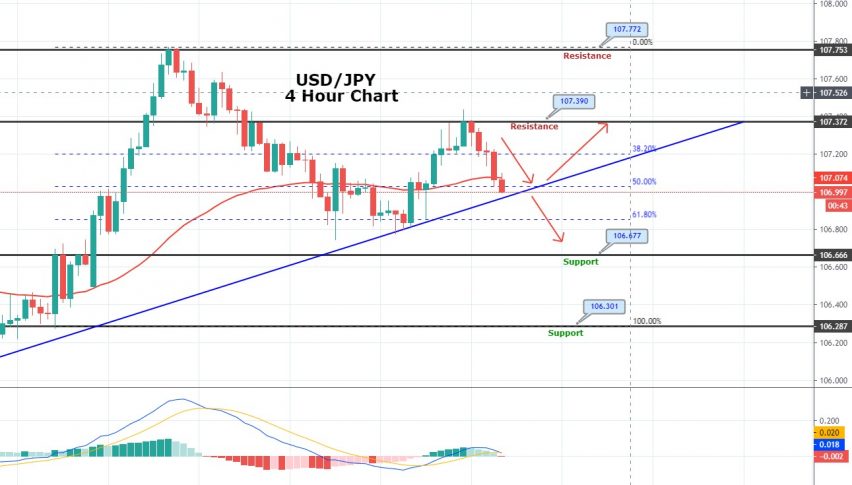 Three Black Crows on USD/JPY – an Update on Sell Position

The market continues moving sideways, but USD/JPY is heading south, crossing below 50 EMA level of 107. The USD/JPY currency pair failed to extend its previous day gains. It dropped 0.15% to 107.03, mainly due to the risk-off market sentiment in the wake of intensified US-China trade tensions, which extended support to the safe-haven Japanese yen and exerted some downside pressure on the currency pair. Apart from this, the Japanese yen was further bolstered by the weaker Chinese data.

Subdued US dollar price action also contributes to the currency pair’s decline. As of writing, USD/JPY is currently trading at 107.07 and consolidating in the range between 107.03 and 107.44.

Commenting on US-China trade tensions, traders were unable to encourage recent optimism over resuming of economic activity in some parts of the world. US President Donald Trump said that he would not be negotiating the trade deal with China, which fueled the risk-off market sentiment and gave support to the safe-haven Japanese yen, which keeps the currency pair lower.

On the other hand, the intensified fears of the second wave of coronavirus and falling hopes about quick global economic recovery from the coronavirus also exerted some downward pressure on the currency pair.

At the USD front, the broad-based US dollar is looking flat and continues to struggle to extend its overnight gains, which were bolstered by Trump’s comments in which he said that it is good to have a strong dollar. The rising Sino-US tensions also favor the dollar, but the sentiment around the greenback remains mute. Whereas the US Dollar Index, which tracks the greenback against a basket of six other currencies, stood at 100.365, down 0.1%, having earlier hit a three-week high.

The reason behind the earlier risk-on market sentiment could be US Senate Majority leader Mitch McConnell’s comments in which he said another general fiscal stimulus package could not be denied.

The US economic docket will be in focus, which shows the release of monthly Retail Sales figures. The data will likely affect the USD price dynamics and contribute to producing some significant trading opportunities later during the early North American session. 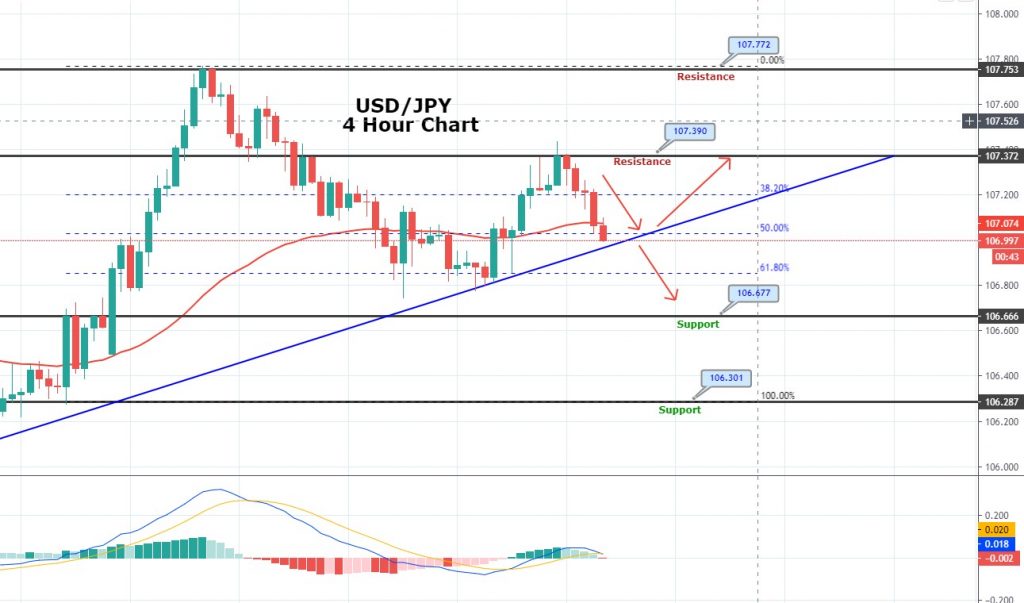 On the technical front, USD/JPY is trading at 107, where the upward trendline is likely to support it on the 2-hour timeframe. Recently, USD/JPY has closed three black crows pattern on the 4-hour chart, which may lead prices further lower towards 106.800. Closing of candles below this level may extend the selling trend until the next support area of 106.650. A bearish breakout of 106.670 level can also lead prices towards 106.250.

For now, we are taking a selling trade; you can check it out on the FX Leaders forex trading signals page. Stay tuned!