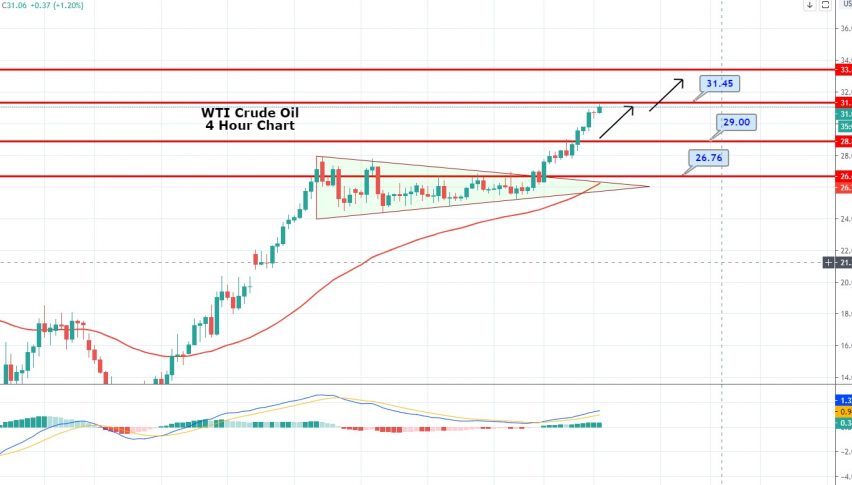 During Monday’s early Asian trading session, WTI crude oil prices were on the bullish track during open this week and hit the highest level since March climbed by 2%, mainly due to the output cuts. Also, the fresh sign of recovery in the oil demand after easing travel restrictions also keeps oil prices higher. Most of the governments are forcing their nations’ populations to get back to work and run business gradually after the slowdown in the coronavirus cases all over the world. At this particular moment, WTI crude oil prices are currently trading at 31.09 and consolidate in the range between 29.61 and 31.24.

The West Texas Intermediate (WTI) oil settled up $1.87, or 6.8 percent at $29.43 a barrel, just off the session peak of $29.92, its highest since mid-March. The reason for the bullish sentiment in crude oil prices could be attributed to OPEC and other major producers cutting supplies in order to compensate for the oversupply issue. In the meantime, the recovery in demand also boosted oil prices.

The world’s top exporter Saudi Arabia declared last week that it would cut supply by a further 1 million barrels per day in June, while OPEC+ wants to continue existing oil cuts until June when the group is scheduled to meet next. Kuwait and Saudi Arabia have agreed to stop oil production from the joint Al-Khafji field for one month, starting from June 1, as per Kuwait’s Al-Rai.

While commenting on the coming EIA data, the EIA is expecting global crude inventories to drop by about 5.5 million barrels per day (bpd) in H2. The EIA has also increased last month’s demand expectations for demand by 690,000 BPD. WTI crude oil prices may extend their bullish rally due to the easing in the mobility restrictions grows.

The WTI June contracts will expire on Tuesday, and hopes are high that US oil would not be repeating the historical drop below zero once again, which was seen last month due to the coronavirus outbreak. Anyhow, the reason for the fewer chances of oil prices’ historical declines could be attributed to the recovery in the oil demand after easing lockdown restrictions. Production is also decreasing as US energy companies delivered cuts in oil and natural gas rigs operating to an all-time low for a second consecutive week.

On the other hand, the positive sentiment in the market was also bolstered by the US Federal Reserve Chairman Jerome Powell’s encouraging comments about economic recovery later this year. Powell said that the economy could recover steadily into the second half of this year if the second wave of coronavirus would not be intense. 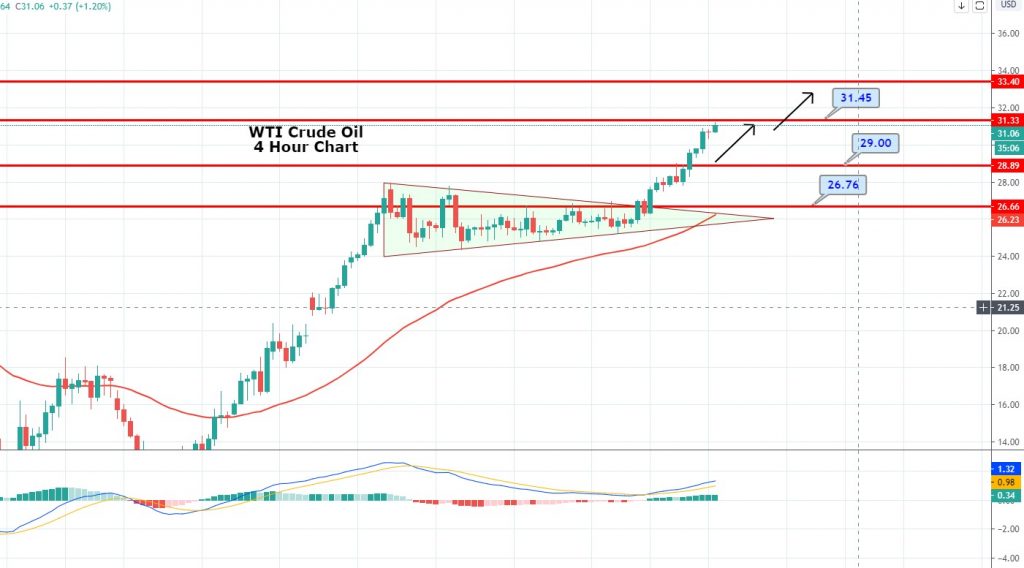 US oil has violated the sideways trading channel, which was providing resistance around 27.50 level. For now, the same level is working as a support for crude oil. While the fresh resistance level stays around 30.96 while bullish breakout of this level could extend buying until the next resistance levels of 31.25 and 31.85. The bullish bias remains dominant today.

Decisive Time for Crude Oil at the 20 Daily SMA, After Bouncing Off the 100 SMA
5 days ago