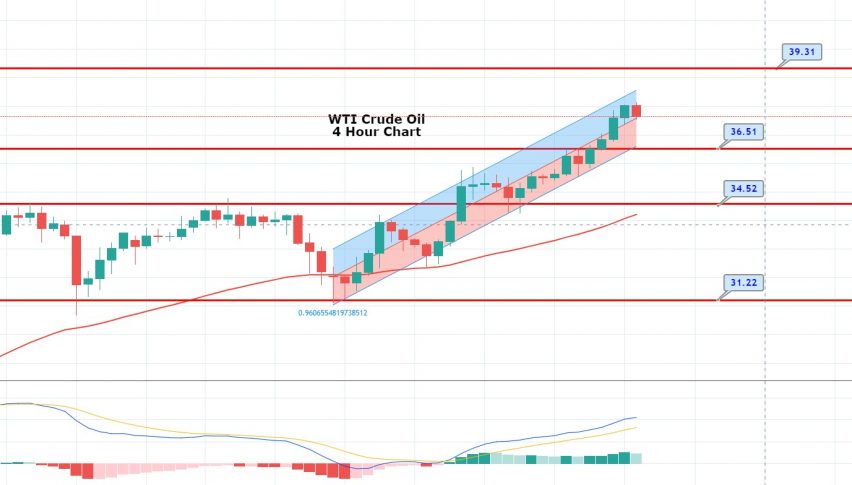 During today’s early Asian trading hours, WTI crude oil prices continued into a 4-day winning streak and hit the 3-month high above $37.00 while representing 2.0% gains on the day mainly after the price-positive weekly inventory data from the American Petroleum Institute (API). The broad risk-on market sentiment and declines in the US dollar also exerted some bullish impact on crude oil. Moreover, the reason for the bullish bias in crude oil could also be attributed to the hopes for further production cuts from the OPEC+.

At press time, WTI crude oil prices are currently trading at 37.66 and consolidating in the range between 36.80 and 37.88. The US West Texas Intermediate crude (WTI) increased 33 cents, or 0.9%, at $37.14, also the highest since March 6. At the API data front, the crude oil inventories dropped -0.483 million barrels against the previous addition of 8.731 million barrels as per the latest API weekly stockpile for the period ended on May 29.

However, the risk-on market sentiment was bolstered by the news that US President Donald Trump did not go with his previous day’s decision to use Federal military to stop the ongoing protests near the White House. The reason for risk-on market sentiment could also be associated with the intensifying optimism about a global economic recovery from the COVID-19 pandemic and several countries continuing to ease lockdown restrictions.

On the other hand, traders seem confident with the hopes of further production cuts. It should be noted that the gains in oil prices could also be attributed to the early positive signals concerning the meeting of the Organization of the Petroleum Exporting Countries (OPEC) and their allies, including Russia, mostly known as OPEC+, on June 4. The OPEC and others, including Russia, will likely extend output cuts of 9.7 million barrels per day (bpd), or approximately 10% of global output, into July or August.

The meeting of the grouping known as OPEC+ is scheduled to happen online on Thursday. Notably, the outputs cuts are currently scheduled to run through May and June, scaling back to a reduction of 7.7 million bpd from July to December, but Saudi Arabia has been pushing to keep the deeper cuts in place for longer.

Looking ahead, market participants will keep their eyes on the geopolitical and trade headlines for fresh impulse ahead of the official weekly inventory report from the Energy Information Administration (EIA). From the forecast view, the official stockpiles rose 3.3 million barrels against the previous rise to 7.928 million barrels during the week ended on May 29. Apart from this, the US economic calendar highlights the ISM Non-Manufacturing PMI, ADP Employment Change and Factory Orders will also be important to watch.

Crude oil is on a bullish run around 37.60, but now it’s likely to find support at 36.50. While on the upside, resistance holds around 39.30 level. The MACD and 50 EMA are supporting the buying trend in WTI prices. Therefore we should look for buying over 36.60 and selling below the same level today.

WTI Crude Oil Remains Under Pressure at Around $40 – Oversupply Fears in Play!
14 hours ago
WTI Remains Depressed Amidst Surging Coronavirus Cases, Weakening Demand!
WTI crude oil prices failed to extend the modest gains of the previous session, dropping to the $40.13 level, while representing 0.45%...
2 days ago
Comments