Today in the early Asian trading session, the safe haven metal prices were flashing red and dropped to $1,709.34 while representing 0.27% losses on the day as the optimism over a global economic recovery from COVID-19 continues to remain high which keeps the risk sentiment soft.

In the meantime, investors are expecting further stimulus measures from governments and anticipated development of a COVID-19 vaccine to further boost economic recovery, which also exerted some bullish impact on the risk-tone. On the other hand, the broad-based US dollar strength triggered by the depressed US data also keeps the yellow metal prices under pressure. At the moment, GOLD is trading at 1,711.30 and consolidating in the range between 1,707.31 and 1,716.32.

Gold futures were bearish by 0.66% at $1,716.05 by 12:14 AM ET (5:14 AM GMT). Meanwhile, the US-China concerns are back in action and turned out to be one of the major factors that kept a lid on any additional losses in the yellow metal. US President Donald Trump’s comments that the Chinese government has continually violated its promises to the US and many other countries have bolstered the US-China tussle. On the other hand, the US Secretary of State Mike Pompeo appreciated Nasdaq’s move on listing rules for Chinese companies, infuriating the dragon nation more. So, the bottom line is that American-based policymakers remain at loggerheads with China.

At the USD front, the broad-based US dollar reported gains on the day as most investors turned to the safe haven currency after US data showed that 1.877 million Americans claimed unemployment during the previous week, higher than the expected 1.8 million claims. As a result, the gold is unable to take bids. Whereas the intensified tussle between the US and China is also providing support to the US dollar. The US Dollar Index that tracks the greenback against a basket of other currencies gained 0.11% to 96.765 by 11:42 PM ET (4:42 AM GMT).

Investors are now looking to Friday’s non-farm payrolls report, which is scheduled to be released later in the day. Payrolls are expected to drop by 8 million. Market participants will keep their eyes on the monthly US employment data for fresh impulses. They will also take clues from economic output related and Sino-American headlines in the meantime.

Gold is trading at 1,709 level, holding mostly below the 50 EMA resistance level, which is suggestings odds of a bearish trend. On Friday, gold’s movement will heavily depend on the release of NFP figures. For instance, economists are expecting a worse unemployment rate of 19.4% while it was 14.7% during the previous month. At the same time, the average hourly earnings are expected to be 1.0% vs. 4.7% previous, which should drive buying in gold.

However, the non-farm employment change is expected to be slightly better -7750K than -20537K during the previous month. Gold can face bearish pressure until the release of actual NFP data today. We may see selling bias below 1,721 levels today until the next support level of 1,698 level.

Gold Facing the 50 SMA, as it Crashes Down
5 hours ago 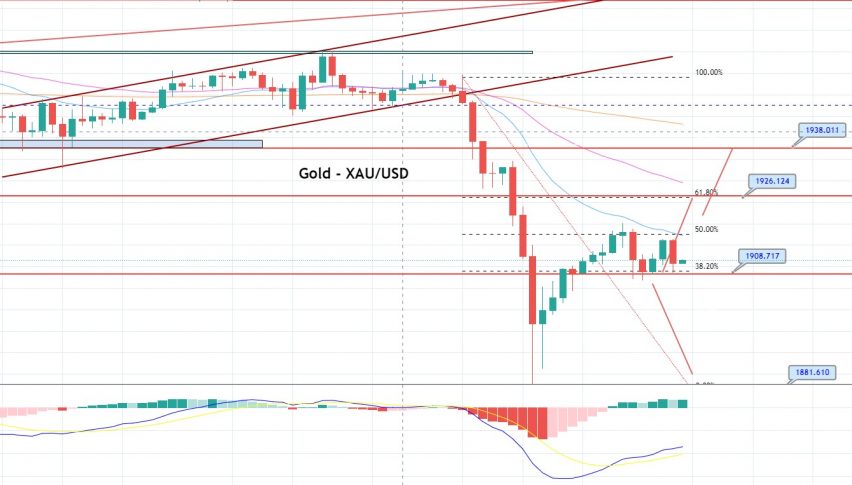 Daily Brief, Sept 22 - Everything You Need to Know About Gold Today!
9 hours ago