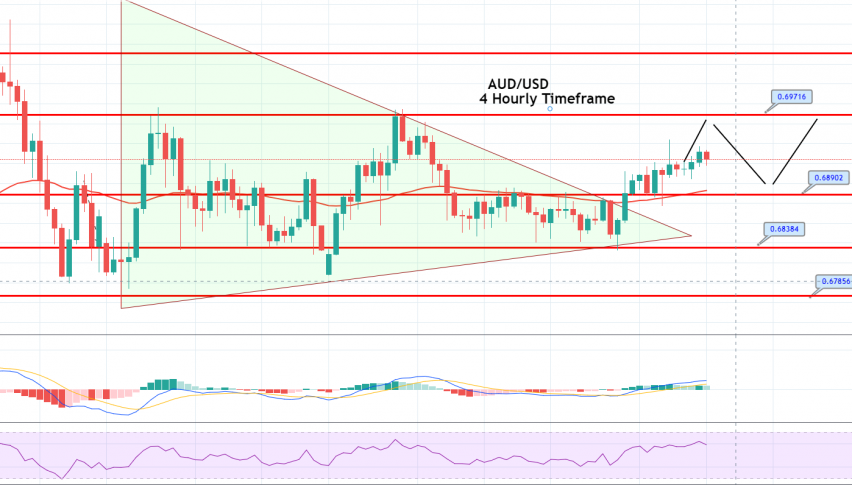 During Thursday’s early European trading session, the AUD/USD currency pair succeeded in extending its bullish moves of the Asian session, taking fresh bids of around 0.6935, amid a risk-on market sentiment. The broad-based U.S. dollar selling bias, triggered by a drop in the U.S. bond yields, has turned out to be one of the major factors that have kept the currency pair higher. At the press time, the AUD/USD is trading at 0.6931, consolidating in the range between the 0.6905 – 0.6938 mark. However, the Aussie traders did not pay any significant attention to the dismal Aussie trade data.

On the fundamentals side, Australia’s exports dropped by 4% in May, having decreased by 11.3% in the previous months. In the meantime, imports faced a 6% decline after April’s 9.8% drop. Despite the bigger decline in imports, Australia’s trade surplus narrowed to AUD 8,025 million from AUD 8,800 million, while the surplus was anticipated to rise to AUD 9,000 million. Consequently, the Aussie got a bearish hit. At the same time, Australian Prime Minister (PM) Scott Morrison’s comments over the Hong Kong issue initially weighed on the Aussie currency. As a result, the currency pair hit a daily low of 0.6905 during the early Asian session on the day.

Speaking at an event on the day, the Australian prime minister, Scott Morrison, confirmed that his country is prepared to ‘step up and support’ citizens of Hong Kong. This statement could fuel the tensions between Australia and China, which have already been simmering for the last few months.

On the positive side, the encouraging U.S. manufacturing data released in the last U.S. session, together with the hopes of a coronavirus vaccine, recently bolstered the risk-on market sentiment, lending some support to the Australian dollar, which is perceived as riskier, whilst at the same time overshadowing the weaker Aussie trade data.

Traders will keep their eyes on the key U.S. employment figures for June before forecasting near-term moves. The next direction of the currency pair will be decided by the U.S. payroll report, which is expected to show that the economy added 3,000K jobs in June, after addition of 2,509K in May. Meanwhile, the forecast is that the unemployment will increase to 7.7% in June from 7.3% in May.

On the technical front, the AUD/USD pair is likely to find support at levels around 0.6890, along with resistance at the 0.6970 level. On the 4-hour chart, we can see the violation of the symmetric triangle pattern, which is likely to drive further buying in the AUD/USD pair. Typically, a breakout from symmetric triangle patterns encourages the continuation of the one-sided movement. That said, the sentiment of an AUD/USD bullish trend remains solid. This can push the AUD/USD even higher, to the  0.6970 level today. Good luck!