Daily Brief, July 07 – Everything You Need to Know About Gold Today!  - Forex News by FX Leaders 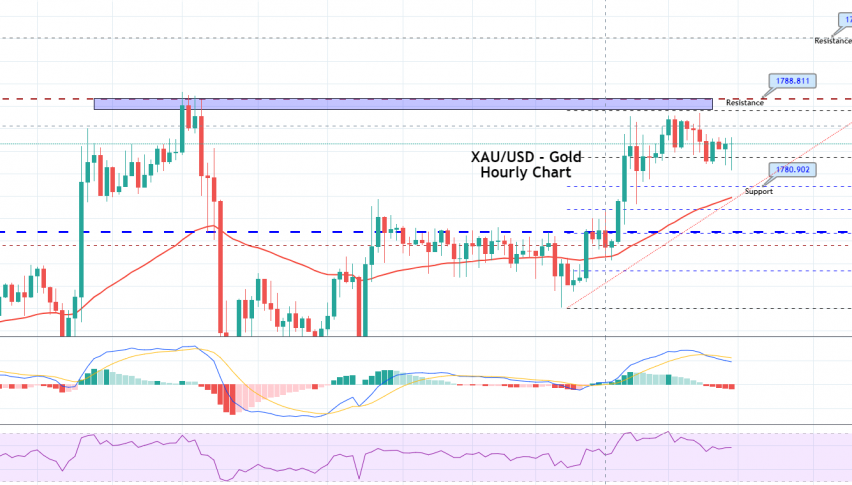 Daily Brief, July 07 – Everything You Need to Know About Gold Today!

Our forex trading signals on gold have performed well lately, and we have managed to close a couple of good trades in precious metal. One day previously, the yellow metal closed at $1,784.54, after placing a high of $1,787.07 and a low of $1,769.89. Overall the movement of gold remained bullish throughout the day. On Monday, Gold prices moved near the eight-year high – the highest level that was hit last week, on the back of an increase in coronavirus cases in many countries. However, strong equities and positive US services data limited the yellow metal’s gains.

On the trade front, the US Chamber of Commerce and 40 other trade associations urged the top US and Chinese officials to intensify efforts to implement a phase one trade deal, despite the coronavirus crisis. On Monday, in a letter to US Treasury Secretary Steven Mnuchin, US Trade Representative Robert Lighthizer and Chinese Vice Premier Liu He, the group said that they were encouraged by the progress in trade deal commitments. Still, they called for a significant increase in purchases of US goods and services by China.

On the coronavirus front, 15 of the US states reported a record increase in new cases of COVID-19 in just the first four days of July. Meanwhile, India, Australia and Mexico also reported an increased number of infections on Monday. India has the third-highest number of cases in the world after 25,000 new infections were recorded in one day.

Due to an increased number of cases across the globe, and a second wave of the coronavirus, officials in Spain have re-imposed restrictions to contain the spread. In the north-western region of Spain, an area containing 70,000 people was sealed off, and only workers were allowed to leave or enter the coastal district of A Marina for almost a week.

However, on Monday, big news came in about the origin of the coronavirus, suggesting that it may not have begun in China. An Oxford Professor, Dr. Tom Jefferson, from the Centre for Evidence-Based Medicine (CEBM), pointed out the recent discoveries of the presence of the virus around the world before it emerged in China. This provided evidence that the exact origin of the virus, as a global organism, was unclear, as it had simply been waiting for favorable conditions to finally emerge.

A preprint study claimed that the SARS-CoV-2 genomes were present in a Barcelona sewage sample from March 12, 2019. Traces of COVID-19 were also found in sewage samples from Spain, Italy and Brazil, which pre-date their discovery in China. Dr. Jefferson said that the coronavirus might simply have been lying inactive until favorable environmental conditions emerged, rather than having originated in China. This news pushed the gold prices towards higher levels, due to fears of the potential presence of COVID-19 across the world.

GOLD continues to face resistance at around the 1,786 level, marking the double top on the hourly timeframe. A bullish breakout of levels around 1,786 could lead the precious metal gold towards the next target level of 1,794, while the support continues to hold at around the 1,778 level today. Good luck!