Daily Brief, July 8 – Everything You Need to Know About Gold Today!  - Forex News by FX Leaders 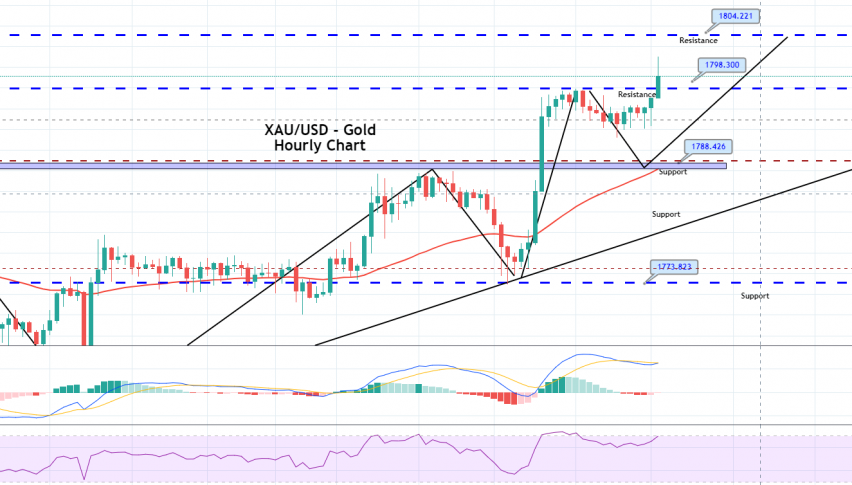 Daily Brief, July 8 – Everything You Need to Know About Gold Today!

The precious metal GOLD prices closed at $1,795.32 after placing a high of $1,797.53 and a low of $773.47. Overall, the movement of gold remained bullish throughout the day. Gold rose for the 4th consecutive day on Tuesday, to near the $1,800 level, due to an increased number of COVID-19 cases worldwide, which raised hopes for further stimulus measures and accommodative monetary policy. The need for additional support from central banks and governments, due to renewed lockdown restrictions in many countries, increased the demand for the safe-haven metal.

It is said that “whenever there is fear, there is always a supporting factor for gold,” and given the recent scenario, fears of the spread of the coronavirus and an economic slowdown have supported gold prices, showing a rise close to the highest level since November 2011.

Another factor that gave gold prices a massive push on Tuesday was the news about the coronavirus being airborne, which means that coronavirus can spread through the air. More than 200 scientists have called for the World Health Organization to acknowledge the airborne nature of COVID-19.

In a letter published in the journal, Clinical Infectious Diseases, two scientists from Australia and the US have stated that, as per studies, the virus can be released in microdroplets during exhalation, talking and coughing. Scientists urged the WHO to acknowledge that, beyond any reasonable doubt, microdroplets containing the virus are small enough to remain suspended in the air.

However, the UN health agency responded that it was well aware of the article and was studying it with technical experts. Meanwhile, the investors became cautious, because it could change some of the current measures being taken to stop the pandemic, so they started investing in the yellow metal instead. Meanwhile, along with the US, China, Russia, Mexico and India, on Tuesday, Iran also recorded the highest single-day deaths from COVID-19 since the outbreak. The overall death toll has now reached 11,931 in Iran.

On the US-China front, US Secretary of State, Mike Pompeo, hinted that the US might also look at banning the popular short-form video platform, TikTok. Pompeo said that US President Donald Trump was taking a serious look at the matter surrounding China’s aggressive moves. In response to Pompeo’s statement, the Chinese makers of TikTok said on Tuesday that it would pull its app out of Hong Kong, amid concerns about new national security laws.

On Tuesday, China’s foreign ministry announced that China had joined a UN global arms trade treaty that was rejected by the United States. The foreign ministry spokesman, Zhao Lijian, said that the treaty would become effective in 90 days, as all the legal procedures required to join the treaty have been completed. As per the treaty, the member countries are required to keep records of international transfers of weapons, and they are obliged to forbid cross-border shipments that could be used in human rights violations or for attacks on civilians. Beijing committed to the treaty efforts on Tuesday, in an effort to enhance peace and stability in the world.

On the data front, on Tuesday, the JOLTS Job Openings for May increased to 5.40M, compared to the expected 4.70M, providing support for the US dollar and weighing on rising gold prices. On Tuesday, Federal Reserve Vice Chair of Supervision, Randy Quarles, said that the lockdown measures that were put into place to mitigate the spread of the deadly coronavirus, pose the biggest challenge for the US financial system. He also urged the global regulators to strengthen bank resolution plans. The need for further measures from regulatory bodies, in order to support the economy through the pandemic crisis, also raised gold prices on Tuesday.

Gold has violated 1,786 resistance levels, and it is now coming up against resistance at the 1,796 level. Gold is now facing an immediate support at the 1,790 and 1,786 level today. A bullish breakout at 1,796 levels could lead the precious metal gold towards the 1,800 level today. Good luck! 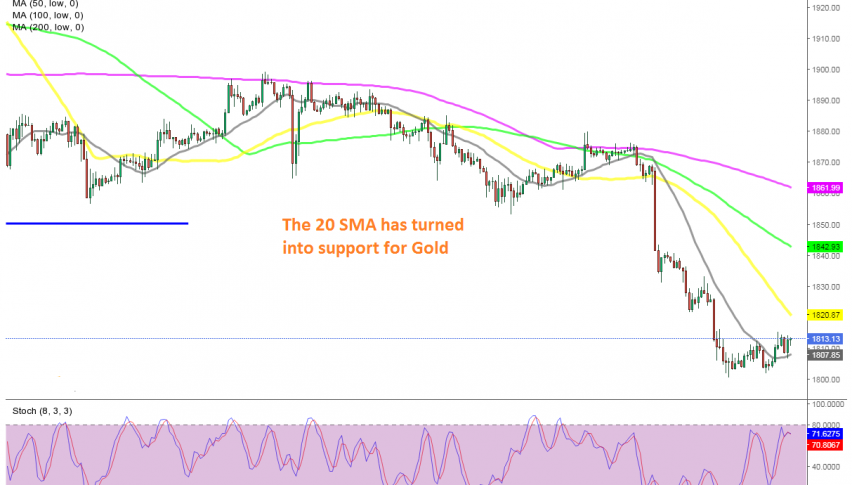 The 20 SMA Turns Into Support for Gold, but Buyers Look Weak
15 hours ago

Daily Brief, November 25 - Everything You Need to Know About Gold Today!
20 hours ago
Comments