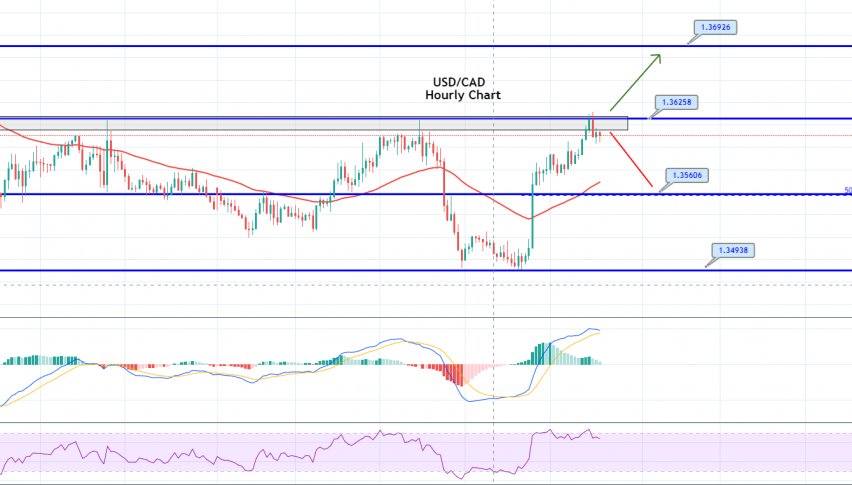 The USD/CAD pair closed at 1.35845, after reaching a high of 1.35941 and a low of 1.34908. The USD/CAD pair reversed its movement on Thursday, recovering most of the previous day’s losses on based on the strength of the US dollar and the weakness of the Canadian Dollar, due to decreasing crude oil prices.

The Loonie fell against the US dollar on Thursday, as the decreasing oil prices and increasing safe-haven demand offset the positive data related to Housing Starts from Canada. At 17:15 GMT, the Housing Starts from Canada for June were reported as 212K against the expected 185K, lending support to the Canadian Dollar and weighing on the USD/CAD pair, with limited additional gains in the USD/CAD pair.

At 00:00 GMT, the Consumer Credit from the US for May dropped to -18.3B, against the expected -15.2B, weighing on the US dollar, and this also limited the additional gains in the USD/CAD pair on Thursday. At 15:30 GMT, the US Unemployment Claims for last week came in at 1.314M, against the 1.375M forecast, supporting the US dollar, which in turn added strength to the USD/CAD pair.

On the WTI crude oil front, the oil prices fell nearly 3% on Thursday, to a 7-day low, as the increasing COVID-19 cases forced many states in the US to pause re-opening measures, and this has raised investor concerns that the strong energy demand will be short-lived.

The oil prices reached $39.25, amid major concerns over decreased demand from the US and other countries, which are re-introducing lockdown measures in order to contain the second wave of the virus. The commodity-linked Loonie came under pressure after the weak crude oil prices, pushing the USD/CAD pair higher on Thursday.

On the other hand, the US dollar was also strong across the board, after the drop of US stocks in WSJ, due to the US Supreme Court’s ruling against claims by Trump’s lawyers that President Trump was immune to publication of his financial records. The Supreme Court said that President Trump’s financial records could not be blocked for New York prosecutors. The strong US dollar gave USD/CAD prices a push, helping it to recover most of the previous day’s losses.

Technically, the USD/CAD pair is testing a double top resistance level of 1.3635, and that is where we can expect a slight sell-off in the USD/CAD pair. The recent closing of a bearish engulfing candle, suggests selling odds until the 1.3580 level, while the bullish crossover at the 1.3625 level could drive buying to the 1.3690 level. Good luck!