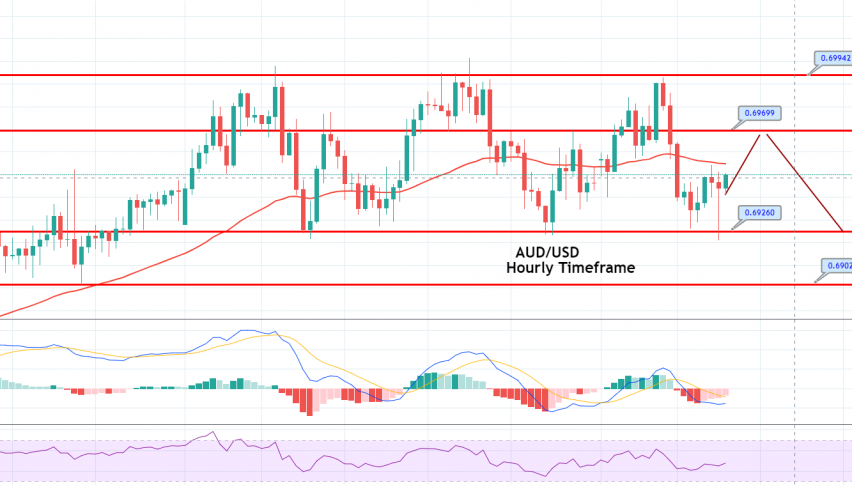 The AUD/USD pair closed at 0.69392, after placing a high of 0.69926 and a low of 0.69385. Overall, the movement of the AUD/USD pair remained bearish throughout the day. The AUD/USD pair extended the losses of the previous day, dropping for the 3rd consecutive day on Monday, despite a risk-on market sentiment. The surging number of cases of COVID-19 across Australia, which forced the Australian government to impose a renewed lockdown in the state of Victoria until there is a significant slowdown in new cases, intensified this sentiment.

On Monday, optimism rose in the market, following reports from Russia, that they had completed human trials on their potential coronavirus vaccine. Another bit of good news related to the antiviral drug Remdesivir also contributed to an increased risk sentiment. Gilead Sciences Inc. said that Remdesivir not only speeded up the recovery process – it might also decrease the chances of dying of COVID-19. The drug manufacturer has also released the preliminary data.

These reports raised optimism in the market, helping the risk sentiment to pick up pace, ultimately helping the Aussie to gain traction. However, the AUD/USD pair failed to cheer this risk on the market mood, as the local government was facing bigger problems.

The state of New South Wales has recorded 14 new COVID-19 infections in the past 24 hours, while the state of Victoria was under strict lockdown measures, in order to contain the second wave of the coronavirus. Melbourne also recorded its seventh consecutive day of new infections in the triple-digit range.

The rising number of coronavirus cases in Australia were alarming, and this kept weighing on the Aussie currency, ultimately dragging the AUD/USD pair down on Monday, despite the risk-on market sentiment.

On the other hand, the rising tension between Australia and China remained on board, in view of Canberra’s consistent implementation of unfriendly policies towards China lately. The most recent of these was Australia’s decision to extend visas for Hong Kong residents in Australia and to suspend its extradition treaty with Hong Kong. This move made China angry, resulting in warnings from the Chinese foreign ministry, that Australia should not meddle in China’s internal affairs, as it will only harm Australia in the end.

Because they have an old trading relationship, the disruptive relations between Australia and China weighed on the Aussie local currency, and this has also kept the AUD/USD under pressure lately. Another factor involved in the AUD/USD pair’s losses on Monday was the better-than-expected deficit in the US Federal Budget Balance. At 23:00 GMT, the Fed Budget Balance showed a deficit of 864.1 Billion, against the expected 860 Billion, providing support for the US dollar, which in turn added further to the losses for the currency pair.

On the technical side, the AUD/USD pair seems bullish, as the pair is heading north to test the 0.6952 level. This resistance level is extended by the 50 EMA, which can be seen on the 4-hour chart above. Today, we should look for bullish trades over the 0.6951 level and above. The pair could go after a further high level of 0.6970. Conversely, selling bias could be seen below 0.6930, down to 0.6900. Good luck!