Daily Brief, July 16 – Everything You Need to Know About Gold Today!  - Forex News by FX Leaders 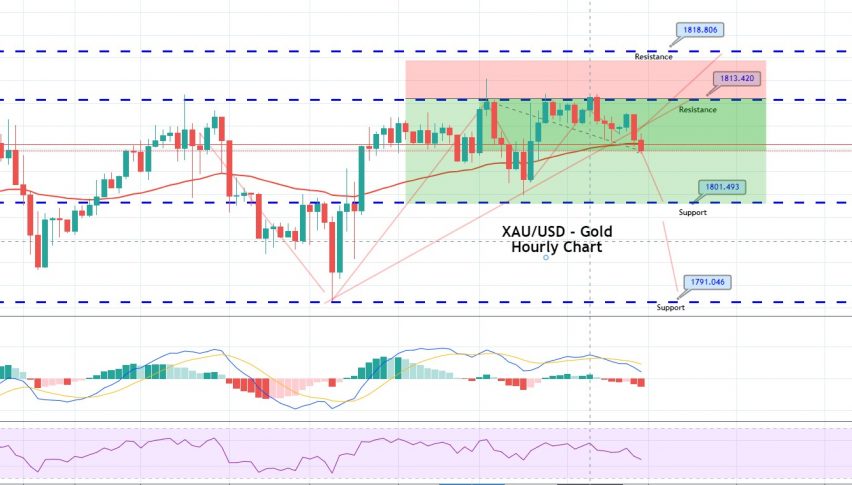 Daily Brief, July 16 – Everything You Need to Know About Gold Today!

The precious metal GOLD prices closed at 1810.15, after placing a high of 1815.04 and a low 1802.62. Overall, the movement of gold remained bullish throughout the day. The gold prices extended their bullish bias of the previous day, posting gains for the 3rd consecutive day on Wednesday, on the back of the latest speech by President Donald Trump and an increase in US-China tensions.

In an early session on Wednesday, President Trump spoke in the White House Rose Garden, where he touched on many topics, including immigration, policing, statues and monuments, trade and climate change. He portrayed himself as the stronger competitor, compared to his rival Joe Biden, in managing the deadly COVID-19 pandemic and directing the US economy to prosperity. His remarks came in after public health officials raised their voices against his administration’s aggressive tone regarding efforts to return the United States to normalcy, including the recent push for schools to reopen for face-to-face classes this fall.

The first half of his speech included the announcement about his signing of the Hong Kong Autonomy Act. The Act ends the city’s preferential status over mainland China, due to the imposition of the controversial national security laws by Beijing.

After that, President Trump covered various topics, speaking out in defense of his administration’s response to the coronavirus pandemic. He also uttered hard words about his rival Joe Biden, whom he accused of being “radical left” and soft on China. Trump’s harsh tone towards his rival and his targeted jibes at China during his speech over the Hong Kong issue, raised concerns about ongoing tensions between China and the US, giving strength to the yellow metal prices.

Meanwhile, on Wednesday, Philadelphia Federal Reserve Bank President, Patrick Harker, said that the United States had failed to control the coronavirus, and there was a high level of uncertainty over how much the pandemic would affect the economy. Harker said that, based on average forecasts, the GDP growth could drop by 20% in the first half of this year, and then grow by 13% in the second half. He also declared that the economy could decline by about 6% this year. Furthermore, he stated that the US central bank should consider raising interest rates until the inflation is above its 2% target. Harker’s comments suggested that the failure of the US to control the virus was creating more economic uncertainty, and these downbeat comments gave gold prices a push on Wednesday.

Apart from that, on Wednesday, reports came in about investigations by the United Nations, which found that some gold, diamond and bauxite mines in the Venezuelan Amazon were primarily controlled by criminal gangs, who exploit, beat and even kill workers.

The report suggested that Venezuelan security and military forces failed to prevent crimes, and rather that they have participated in some violence against miners. There have been calls for the authorities to take immediate steps to end labor and sexual exploitation, child labor, and human trafficking, coupled with the dismantling of criminal groups that control mining activities. This report also provided a little support to the rising gold prices.

The Fed’s Beige Book was released, and it showed that in almost all US districts, economic activities had increased, but they remained well below pre-pandemic levels. On the US-China front, the Trump administration was considering a sweeping ban on travel to the US by members of the Chinese Communist Party and their families. This move would certainly prompt retaliation against Americans seeking to enter or remain in China, and would escalate tensions between both nations. This news also added to the daily gains in gold prices.

However, the GOLD gains were limited because of the stock market’s strength after the hopes of a coronavirus vaccine and positive economic data from the US side. The cost of goods imported into the US spiked by 1.4% in June, marking for a second straight increase. The Industrial Production in June also rose to 5.4%, coupled with a rise by 68.6% in the Capacity Utilization Rate. The robust economic data from the US capped additional gains in gold prices.

GOLD is facing strong resistance at the 1,814 level, and closing of candles below this level could extend selling until the 1,803 support level. On the lower side, the next support level is likely to be found at around 1,795. On the higher side, a bullish breakout on the 1,814 level could extend the buying trend until the 1,817 level. Selling bias seems dominant today, at below 1,814, while a bullish breakout above could drive buying until the 1,824 mark. Good luck.