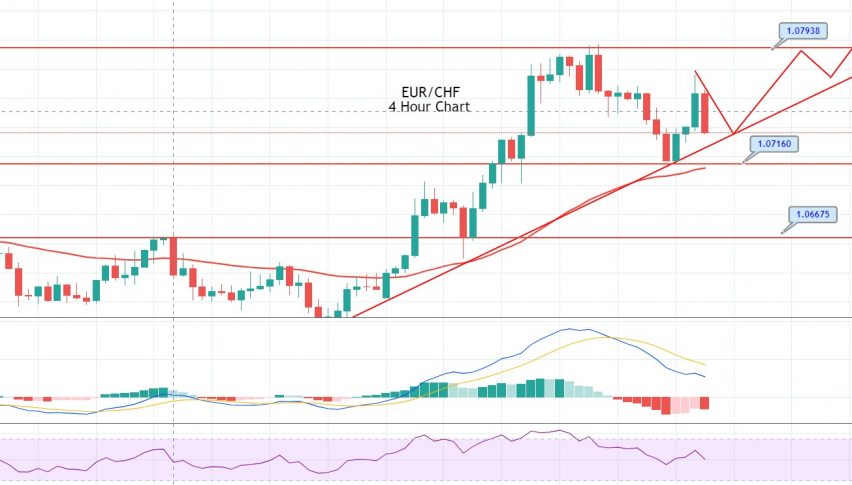 The EUR/CHF pair continues to drive a choppy movement as the pair consolidates in between the 1.0793 and 1.0716 levels. The demand for safe-haven currencies, such as the Japanese yen and the Swiss franc, remains high, which is one reason behind the bearish bias in the EUR/CHF .

On the flip side, the single currency euro took a hit after hopes that the EU Summit would reach an agreement faded a little when the Summit dragged on till Sunday. The EU leaders failed to break the deadlock after two days of talks over the trillion-euro COVID-19 rescue package, and the talks returned to the negotiating table on Sunday.

The Hungarian Prime Minister, Viktor Orban, said that Dutch Leader Mark Rutte was responsible for the deadlock at the European Union Summit, where leaders were set to negotiate over the EU recovery package for the third day.

Ahead of Sunday’s meeting, German Chancellor Angela Merkel was expected to reveal new proposals to bridge the gap between the “Frugal Four” countries and the rest of the EU. The Frugal Four – Austria, Denmark, Netherlands, and Sweden – wanted big pieces of the pie, and said that they should be granted as loans, and not as subsidies or grants.

The EUR/CHF pair is facing downward pressure today. Technically, the pair is gaining support at the 1.0716 level, extended by the 50 EMA level. On the higher side, the next resistance is likely to be found at around 1.0793 level. A bearish breakout of 1.0716 should open up further room for selling until the 1.0660 level. Our signal on EUR/CHF seems to be doing well, and it is secure until the pair reaches support over the 1.0700 level. Good luck!

Cryptos Retreat After Bitcoin Fails at the Resistance at Around $40,000, But Might Resume the Uptrend Soon
18 hours ago