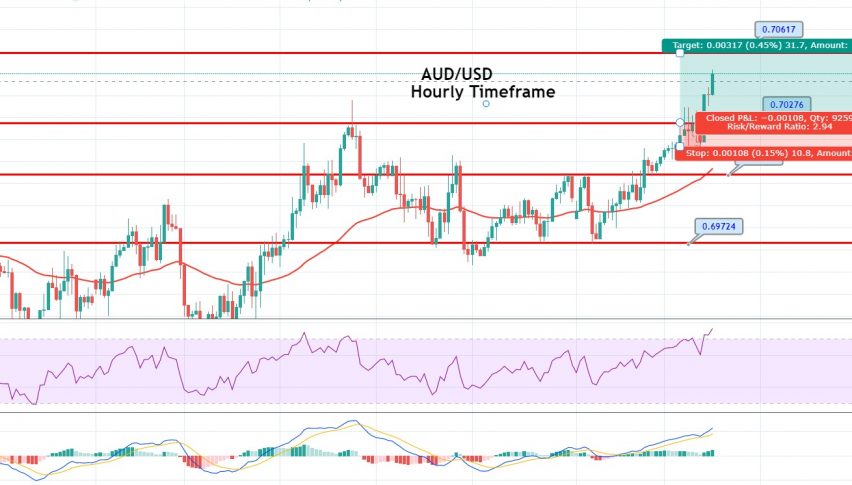 The AUD/USD pair closed at 0.70170, after placing a high of 0.70171 and a low of 0.69726. Overall, the movement of the AUD/USD pair remained bullish throughout the day. The AUD/USD pair extended its daily gains on Monday, on the back of the weakness of the broad based-US dollar, along with the improved risk sentiment, after positive responses to virus vaccines were reported.

The Aussie, which is perceived as risky, gained traction after the news that two coronavirus vaccines had proven safe for humans – the vaccines produced strong immune reactions among patients who participated in two separate clinical trials.

On Monday, doctors from Britain and China reported successes in their virus research. Vaccines from the UK induced a strong antibody production and produced a strong immune response in the first trials on more than a thousand adults. The second vaccine, from China, showed that a widespread antibody immune response developed in most of the 500 people on whom the vaccine was tested. The news raised hopes and optimism, improving the risk sentiment around the market and lending strength to the Australian dollar. The strong Aussie pushed the AUD/USD pair onto the upside track on Monday.

On the US front, the US dollar was weak across the board, as the US Dollar Index fell to the 95.85 level, posting losses. No macroeconomic data was released on Monday, and the US dollar remained at the mercy of virus updates and stock performance.

Due to the increased number of coronavirus cases from all states in the US, and with California, the largest state, in partial lockdown, the US economy came under pressure, weakening the US dollar on Monday. The weakness of the US dollar added to the gains of the AUD/USD pair.

On the US-China front, China’s Ambassador to the United States, Cui Tiankai said that America must make a fundamental choice about whether it can exist in peace with a modernized, strong, prosperous China. These remarks were prompted by the ban imposed on members of China’s Communist Party by the US, preventing them from entering the United States.

The Chinese Ministry of Foreign Affairs has accused America of oppressing and bullying China. They added that, under President Xi Jinping, China had become a more assertive, expansionist and repressive power, and people need to fully recognize the realities of today’s world.

On Tuesday, the investors will pay close attention to the minutes of the meeting of the Reserve Bank of Australia and the speech by RBA Governor Philip Lowe, in order to find more clues about the future movements of the AUD/USD pair.

The AUD Breaks Out
2 hours ago

EUR/USD Breaks To The Bull, 1.1900 In View
8 hours ago
USD/CAD Violates Choppy Range - Selling Signal in Play!
The USD/CAD is breaking below the 1.3046 support level amid weakness in the greenback. The loonie pair may head towards the support level...
16 hours ago
Comments