Daily Brief, July 23 – Everything You Need to Know About Gold! - Forex News by FX Leaders 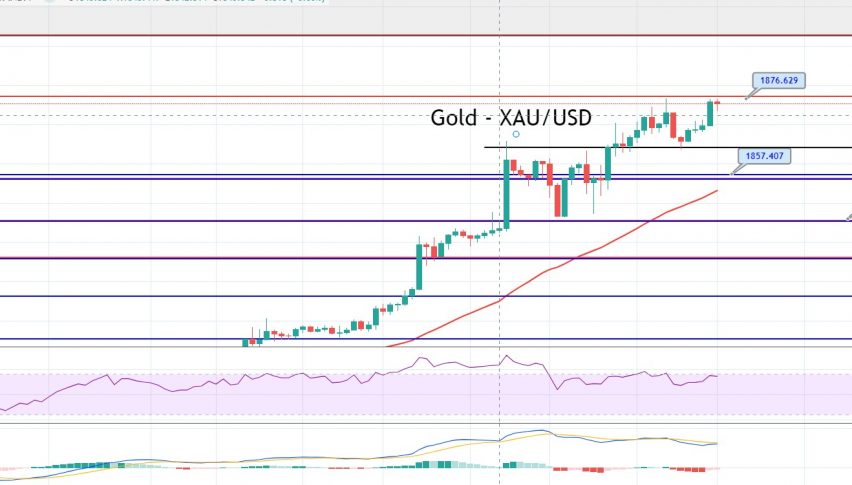 Daily Brief, July 23 – Everything You Need to Know About Gold!

The GOLD prices closed at 1,871.47, after placing a high of 1,872.17 and a low of 1,839.37. Overall, the precious metal remained strongly bullish throughout the day. On Wednesday, gold surged to a nine-year peak, because of hopes that the Central Bank would introduce more stimulus measures, to ease the economic impact of the coronavirus. Gold extended its gains, rising for the 4th consecutive session, due to increased US-China tensions and the weakness of the broad-based US dollar.

The yellow metal soared to its highest level since September 2011, reaching Wednesday’s $ 1,870, as the resurgence of the COVID19 pandemic weighed on the US dollar. The bullish run in the gold market is firmly rooted, and it is expected that the rally in the precious metal could push its prices up, to hit $ 2000 by the end of 2020.

Governments, central banks, and pretty much everyone else too, were looking to more fiscal and monetary policy inputs, and this hope drove gold onto the upside. The gold bulls calmed down after reaching the $ 1,865 level, because optimism set in after the news about potential coronavirus vaccines, making the safe-haven appeal weaker in the market, and pulling gold back to the $ 1,825 support level.

However, on Tuesday, the world’s largest economy recorded its highest death toll in 24 hours since June, with reports suggesting that 1,000 people had died of the coronavirus in one day. Statistics indicate that the US average is on track to hit 1 million new cases in 2 weeks. US President Donald Trump shifted his rhetoric and tone regarding the pandemic situation, saying that COVID19 would get worse before it got better.

The non-stop rise in new cases from the US and around the world raised hopes for more stimulus packages from central banks, especially in the US, as its previous CARES Act was just three days from expiration. The fact that all eyes are on the next stimulus package by US Congress weighed on the US dollar, lifting gold prices even higher, towards the highest level in nine years.

On the other hand, the US House of Representatives was set to vote on legislation to reverse President Donald Trump’s controversial order to ban the entry of immigrants from mostly Muslim-majority countries.

The NO BAN Act has broad support from Democratic legislators, and is likely to pass the democrat-controlled House, despite strong opposition from Republicans and the White House. Joe Biden, former Vice-President of the US, has pledged that he will end Trump’s so-called Muslim travel ban on his first day in office if he is elected as president. These political rivalries also added to the weakness of the US dollar on Wednesday.

The risk-off market sentiment was boosted after tensions between China and the US increased on Wednesday. China’s Foreign Ministry stated that the United States had told China, on July 21, to close its consulate in Houston. The Chinese Foreign Ministry said that it had received an abrupt notification.

As a result, Beijing strongly condemned this move by the US and threatened retaliation against it. Markets were firmly pro-risk on Tuesday night, thanks to hopes of economic recovery after the announcement of the euro stimulus package. As of Wednesday, the tensions increased between the US and China, and the risk appetite worsened, while the yellow metal gained.

The US dollar was also weak, due to concerns about a possible delay in the US fiscal stimulus, as the Republicans and Democrats were finding it difficult to reach consensus on the next round of economic stimulus measures. This also supported gold, giving it the impetus to reach the $ 1,870 level.

On the data front, the Housing Price Index for May was released at 18:00 GMT. It showed that the index fell to -0.3% from the expected 0.3%. At 19:00 GMT, the Existing Home Sales from the US also dropped to 4.72 M from the forecast of 4.77M in June, weighing on the US dollar. The poorer-than-expected macroeconomic data from the US weighed heavily on the US dollar, pushing the gold prices to record highs on Wednesday.

The precious metal, gold, is trading at the 1,877 level, and recently, it closed a Doji candle below 1,877. Next to the Doji candle, gold is closing a bearish engulfing candle that could drive selling bias until 1,856. Conversely, the bullish breakout on the 1,877 level could lead to gold prices rising even higher, until the 1,892 level. Good luck!

Bitcoin Plunges Over 9% - A Quick Technical Outlook!
4 hours ago

Daily Brief, November 26 - Everything You Need to Know About Gold Today!
6 hours ago
Comments