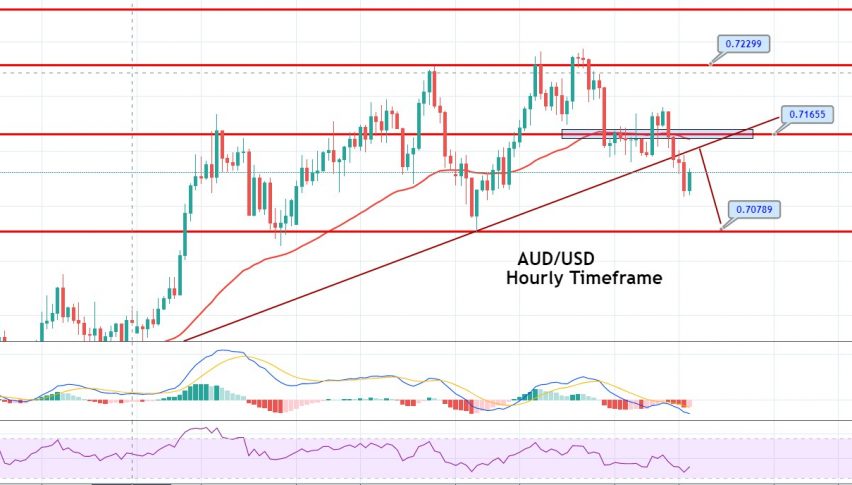 AUD/USD Violates Upward Trendline – Is It Good Time to Sell?

The AUD/USD closed at 0.71433, after placing a high of 0.71895 and a low of 0.71348. Overall, the movement of the AUD/USD pair remained flat, yet slightly bearish, throughout the day. In the first session of the day, the AUD/USD pair rose, on the back of the improved risk sentiment in the market, whereas after the release of the US data, the AUD/USD pair started to lose traction, dropping to lose all of its gains for the day.

The risk sentiment was brought on by the Russian coronavirus vaccine news. Russian President, Vladimir V. Putin approved the vaccine, making Russia the first country to do so. He said that the vaccine was effective enough, and ignored warnings by global health officials.
Equity markets rushed to the upside after this news, as the risk appetite increased, ultimately pushing the Aussie, which is perceived as risky, onto the upside. The Aussie surged, reaching nearly 0.7200, at which point it came up against rejection.

On the data front, at 06:30 GMT, the NAB Business Confidence from Australia dropped to -14.0 in July, from June’s 1.0. And from China, at 13:32 GMT, the data released on New Loans indicated a drop to 993 Billion in July, compared to the 1,200 Billion that was expected, and the previous figure of 1,810 Billion. The China proxy-Aussie suffered because of this, losing all of its daily gains.
Meanwhile, from the US, at 15:00 GMT, the NFIB Business Index figures were released, showing a drop to 98.8 in July, against the expected 100.7, weighing on the US dollar. The Core PPI from the US rose to 0.5% in July, compared to the expected 0.1%, lending support to the US dollar. The PPI also rose to 0.6%, compared to the projection of 0.3%, and this also supported the US dollar. The strong US dollar weighed on the AUD/USD pair, pulling the prices for the pair onto the downside.

Meanwhile, the US-China tensions also remained on board, as China said that it would impose retaliatory sanctions on 11 Americans, in response to the US sanctions on officials from Hong Kong and China, that were announced on Friday. China included Senator Marco Rubio and Ted Cruz on the list of the Americans who are likely to be sanctioned by the dragon nation.

The ongoing tensions between the US and China could lead to the halt of the Phase 1 trade deal, which is due to be assessed on Wednesday, when negotiating members from both countries will discuss the progress via video conference. However, the escalated tensions weighed on the Aussie, which is perceived as risky, dragging the prices for the AUD/USD pair down from the daily high.