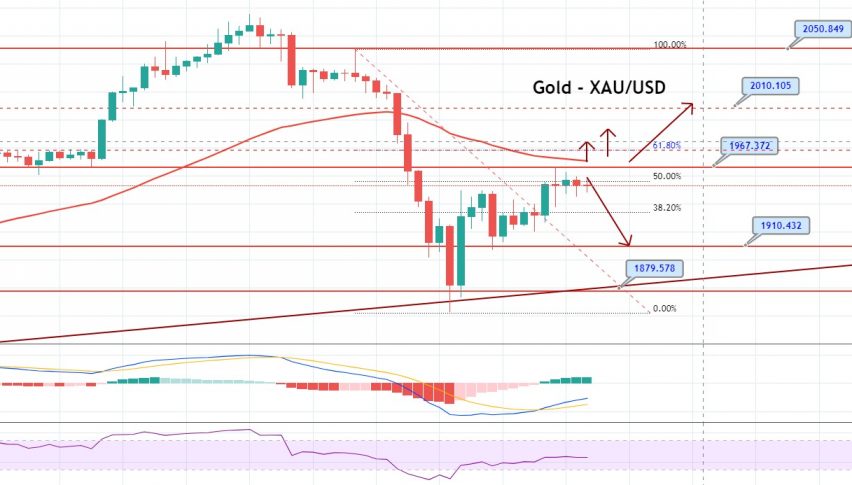 Gold fought for traction, as a jump in US Treasury yields pushed traders into reassessing their opinions again, following a steep retreat from a record high earlier this week. This has put bullion on course for its first weekly decline since the beginning of June. The precious metal was down 0.1%, to $ 1,952.01 an ounce, by 0356 GMT. Bullion has declined 4% so far this week, the biggest weekly percentage fall since early March.

Gold prices followed the previous day bearish trend, when gold posted its steepest sell-off in over seven years. However after the release of UK economic data, gold started to move in the opposite direction, as fears over a coronavirus-led slowdown in the economy were once again prompted.

Gold prices dropped below the 1,866 level and bounced back very strongly near the level oat close to 1,916. The economic damage caused by the coronavirus pandemic escalated on Tuesday, as figures revealed that Britain’s economy had shrunk by a record of 20.4% in the second quarter of this year. The reason why this news hit gold prices so hard was because it was the most severe contraction reported by any major economy so far.

Another reason behind the rising gold prices was the deadlock in Washington over a stimulus package. After the fifth day without talks, US Secretary Steven Mnuchin said on Wednesday that the White House and top Democrats in Congress may not be able to reach a deal regarding the coronavirus aid package.

However, the US Dollar Index rose during the Asian trading session, but failed to maintain its gains, dropping by 0.3%, to 93.39, on Wednesday. The weak US dollar helped gold to gain in the second half of the trading session.

On the US-China front, US Secretary of State Mike Pompeo said on Wednesday that China’s economic power was a greater global threat than the Soviet Union during the Cold War.

In a speech to the senate in the Czech Republic, Pompeo said that the campaigns of coercion and control by the Chinese Communist Party posed an even greater threat, because it has already enmeshed itself into our economies, politics and societies, in a way the Soviet Union never did.

He also cited the risk of data theft and national security from apps like TikTok and WeChat. Furthermore, he said that the US was ready to invest up to $ 1 billion in the Three Seas Investment Fund, in order to help offer protection against China’s opaque lending practices.

Dallas Federal Reserve President Robert Kaplan said on Wednesday that the resurgence of the coronavirus had muted the US recovery from the past few weeks, and that it could also damage the improvement in the unemployment rate. This weighed on the US dollar and added strength to the gold prices, which were already rising on Wednesday.

The US dollar gained a bit of bullish momentum upon the announcement of US jobless claims numbers. On August 7, the United States Initial Jobless Claims came in at 963K, beneath the projections of 1,120K; this was the first reading under one million since March 21. The Initial unemployment claims 4-week average sank to 1,252.75K on August 7, from 1,337.75K in the previous week. Later today, traders will keep an eye on the US Core Retail Sales m/m, Retail Sales m/m and Prelim UoM Consumer Sentiment, which will drive further movements in the market.

The GOLD price hasn’t changed much, as it continues to trade within a narrow range between 1,940 and 1,955, especially after gaining support at the 1,880 level. The upward trendline supported the pair at 1,880, and closing of a Doji candle above this level suggests the odds of a bullish reversal in gold prices. Above the 1,955 level, the precious metal may find the next resistance at 1,979/81. But a bearish breakout of 1,940 could drive selling up to 1,913 today. We expect choppy trading today. Good luck!

Forex Signals Brief for Sep 24: US Jobless Claims in Focus!
8 hours ago

Daily Brief, Sept 24 - Everything You Need to Know About Gold Today!
9 hours ago