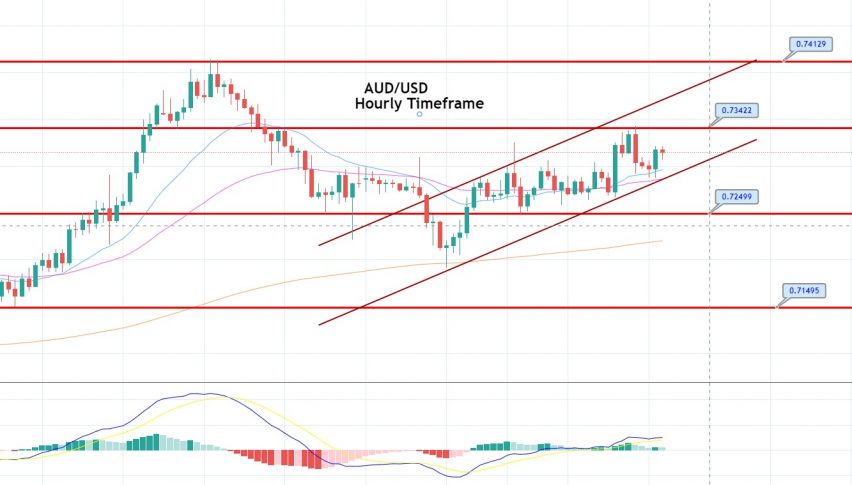 The AUD/USD extended the bullish bias of the previous session, and took further bids around a weekly high of 0.7336, mainly due to the risk-on market sentiment, backed by the on-going optimism that a treatment will be found for the highly infectious coronavirus. Moreover, the renewed Sino-American trade optimism also boosted the market risk tone, underpinning the Australian dollar, which is perceived as a risk currency, and contributing to the gains in the currency pair. Apart from this, the selling bias in the broad-based US dollar, triggered by doubts over economic recovery in the US, amid delays in the US fiscal stimulus measures, also supported the currency pair.

Besides this, the currency pair got an extra boost, mainly after the minutes of the RBA meeting downplayed concerns over the appreciation of the AUD. Meanwhile, the upbeat Chinese Retail Sales and Industrial Production data also boosted the positive tone surrounding the AUD currency, which also extended some support to the major.

The Trump administration stepped back from its plans for an import ban on cotton and tomato products from China’s Xinjiang region, although they announced a narrower ban on products from five specific entities. Across the pond, the Dragon Nation also extended an olive branch to the US, by announcing the lifting of tariffs on some US import goods. This progress between the US and China is expected to bolster the risk-on mood.

Moreover, the market risk tone was further bolstered by optimism over a possible vaccine and treatment for the highly infectious coronavirus. These positive vibes came after the Chinese CDC chief biosafety expert confirmed that the ordinary Chinese people would be able to get the COVID-19 vaccine as early as November or December, as the Phase 3 clinical trials went very smoothly. Besides this, Pfizer and BioNTech also boosted vaccine hopes, stating that they are looking to expand the candidate enrolment for their trials.

Furthermore, the risk-on market sentiment was further bolstered after the release of stronger-than-expected Chinese industrial production data, which strengthened the hopes that the world’s second-largest economy is returning to normal, which weighed on the US dollar. On the data front, the numbers for China’s August Retail Sales YoY,  came in at 0.5%, against the expected 0% and the previous -1.1%, with the Industrial Output YoY at +5.6%, compared to the expected +5.1% and the previous +4.8%. In the meantime, the Fixed Asset Investment YoY remained unchanged, at -0.3% versus the projection of -0.4% and the previous figure of -1.6%. At the same time, China’s Private Sector Fixed Asset Investment for January-August dropped by 2.8% YoY. This, in turn, underpinned the Australian dollar, which is perceived as a risk currency, and contributed to the gains in the currency pair.

On the contrary, the uncertainties over the much-awaited fiscal package remain in play, as neither side is showing any clues. Meanwhile, the rising number of COVID-19 cases globally continues to fuel worries concerning the global economic outlook. On the USD front, the broad-based US dollar remained under pressure on the day, amid uncertainties over the next round of talks on the US fiscal stimulus measures. Furthermore, the weaker tone surrounding the US Treasury bond yields, due to the upbeat market sentiment, put further pressure on the US dollar, contributing to the pair’s gains. Meanwhile, the US dollar index dropped to 93.029, slipping further down from the one-month high of 93.664 that it touched last Wednesday, with its low last week, of 92.695, seen as immediate support.

At home, the release of the minutes of the September meeting of the Reserve Bank of Australia (RBA) showed that the central bank was not bothered regarding the appreciation of the Aussie dollar. However, the RBA wants a lower exchange rate, which could support the economic recovery. This, in turn, boosted the Aussie currency and extended support to the major.

Forex Signals Brief for Dec 3: US Jobless Claims Ahead
17 hours ago

AUD and NZD Break Out
17 hours ago
Comments