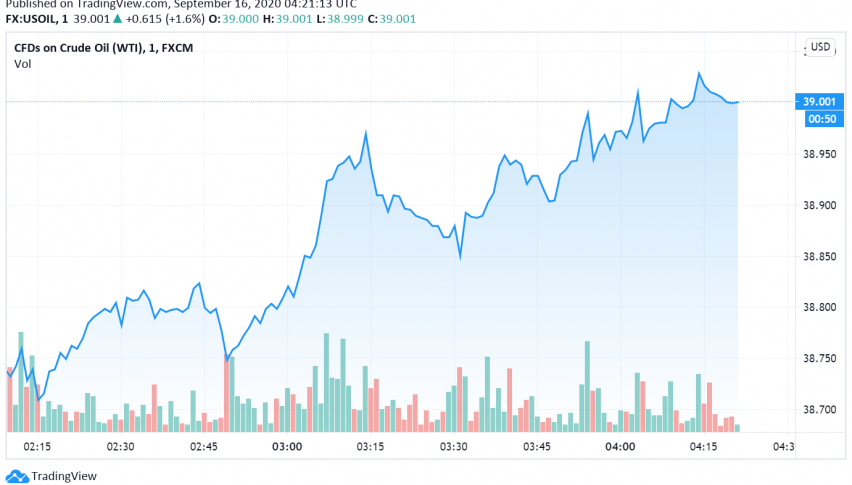 WTI crude oil prices are climbing higher early on Wednesday as Hurricane Sally shuts down oil and gas production in the Gulf of Mexico region even as US crude inventories fell sharply during the previous week. At the time of writing, WTI crude oil is trading at around $39 per barrel.

The tropical storm has shut down over 25% of US’s oil and gas output and led to the closure of ports in the region. Analysts expect US oil output to contract by anywhere between three and six million barrels for around 11 days until production can be restored to normal levels.

Meanwhile, crude oil prices also received a boost following the release of the API report during the previous session. The report revealed that crude stockpiles in the US fell by 9.5 million barrels during the past week, beating economists’ forecast for a 1.3 million barrel increase instead.

However, gains in crude oil remain limited as the overall sentiment continues to focus on weakness in oil demand due to the coronavirus pandemic. Despite countries emerging from lockdown, the demand for oil is yet to pick up, causing oil producers and traders to revise forecasts for global oil demand this year.

Arslan Butt // Index & Commodity Analyst
Arslan Butt is our Lead Commodities and Indices Analyst. Arslan is a professional market analyst and day trader. He holds an MBA in Behavioral Finance and is working towards his Ph.D. Before joining FX Leaders Arslan served as a senior analyst in a major brokerage firm. Arslan is also an experienced instructor and public speaker.
Related Articles
WTI Crude Oil Depressed Below Mid-$ 39.00 - Concerns About the Growth in Fuel Demand!
WTI crude oil prices registered a 3-day of losing streak and trading largely unchanged on the day near below $39.50 level, having hit the...
5 hours ago