The global market trading sentiment has been flashing green since the day started, and it is expected to end the week with gains. However, the positive market sentiment is being supported by optimism regarding a possible vaccine and treatment for the highly infectious coronavirus. These hopes were boosted after the report that Novavax Inc has started late-stage clinical trials on their coronavirus vaccine in the UK. The experimental vaccine is produced on partnership terms with the government’s Vaccines Taskforce.

Furthermore, the risk-on market sentiment was further bolstered after the Democrats in the US House of Representatives raised hopes over the $ 2.2 trillion COVID-19 stimulus package. In the meantime, House of Representatives Speaker Nancy Pelosi and US Treasury Secretary Steven Mnuchin also hinted at the resumption of the delayed stimulus talks, which was another factor that boosted hopes of a stimulus package.

As a result, the broad-based US dollar failed to gain any positive traction and remained bearish on the day. Moreover, the losses in the greenback could also be attributed to the market risk-on tone, but they might also be associated with the downbeat US unemployment data, which fueled fears that the recovery of the US economy is failing. On the US data front, the number of US citizens claiming unemployment over the past week rose to 870,000, indicating a halt in the economic recovery, and highlighting the pressing need for Congress to pass the support measures. However, the losses in the US dollar kept the USD/CAD currency pair under pressure. Meanwhile, by 9:52 PM ET (1:52 AM GMT), the US Dollar Index, which tracks the greenback against a basket of other currencies, had fallen by 0.03%, to 94.365 .

However, the market trading sentiment was rather unaffected by the rising numbers of COVID-19 cases globally and the Sino-American tussle. On the US-China front, tensions between the two economic giants picked up pace after the US Justice Department urged a judge to allow the government to ban WeChat from app stores. As per the latest report, early on Friday, the US Justice Department  appealed to a San Francisco federal judge to permit the government to ban Apple Inc and Google from offering WeChat for download in their app stores.

On the contrary, the crude oil prices failed to maintain the modest gains of early in the day, and they started to flash mixed signals before the European session. However, the reason for the subdued crude oil prices could be attributed to the fears of an oversupply and a lower demand. Moreover, Libya’s news that it will resume its oil exports added extra pressure to the crude oil prices. Thus, the mixed sentiment regarding the oil prices tends to undermine the demand for the loonie, which is a commodity-linked currency, and this has become a key factor that might help to limit deeper losses in  the currency pair.

In the absence of any major data/events on the day, market traders will focus on the speech by FOMC Member Williams. Apart from this, the Durable Goods Orders m/m will also be key to watch. Meanwhile, all eyes will also be on the movement of the USD and coronavirus headlines, as they play a key role in the currency pair. 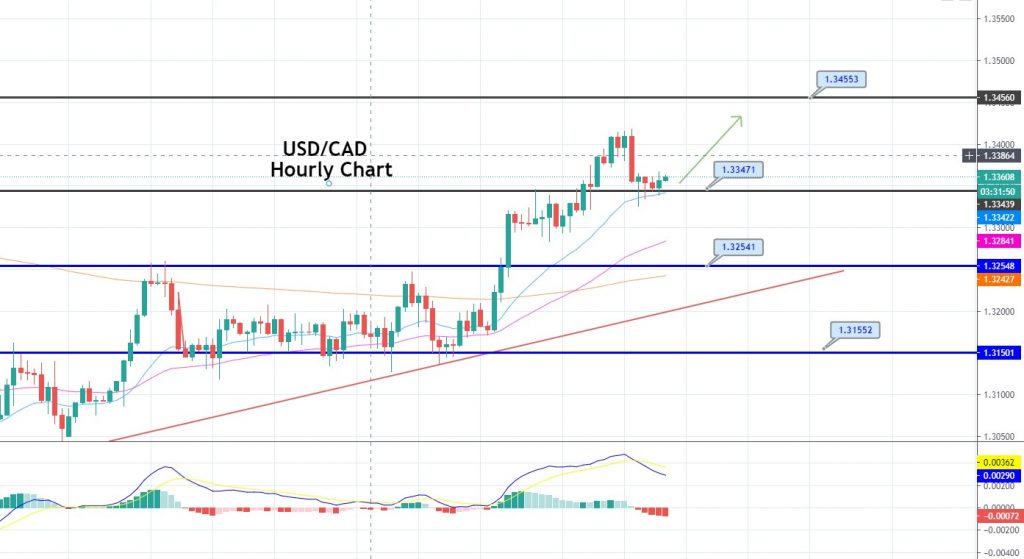 The USD/CAD is supported over the 1.334 level, and closing of candles over the 1.3347 level may drive the bullish bias until the 1.3450 level. The 50 periods EMA and MACD are expected to keep the commodity currency bullish. On the lower side, the USD/CAD may find support at the 1.3240 level. Good luck!

List of US Companies Releasing Earnings (EPS) Today
18 hours ago
Crude Oil Succeeds in Maintaining the Bullish Bias of the Previous Session - A Fundamental Outlook!
22 hours ago
Comments