Daily Brief, October 05 – Everything You Need to Know About Gold Today! - Forex News by FX Leaders 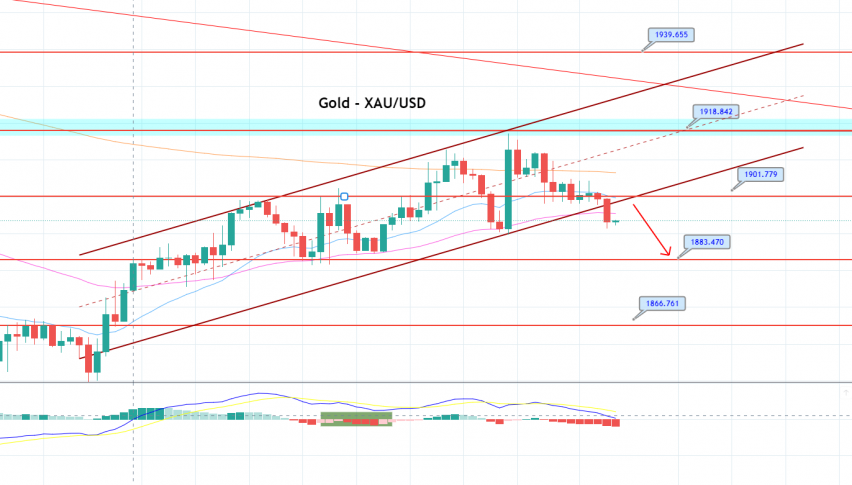 Daily Brief, October 05 – Everything You Need to Know About Gold Today!

Welcome back to another exciting week, fellas,
Prices for the precious metal, gold, closed at 1,898.61, after placing a high of 1,917.03, and a low of 1,889.73. Overall, the movement of gold remained bearish throughout the day. On Friday, gold prices declined, falling despite President Donald Trump being tested positive for the coronavirus. The instant reaction to this news pushed both the US dollar and the gold prices higher, reflecting a strange relationship between the greenback and the precious metal, which started two months ago. On Thursday night, US President Donald Trump announced, via Twitter, that he and First Lady Melania had both tested positive for the coronavirus. This news came in hours after one of Trump’s closest top advisers, Hope Hicks, was also reported to be infected with COVID-19.
The initial response was a rise in the safe-haven appeal in the market, which helped gold prices to gain traction and move higher in the early trading session. However, in the late trading session, gold prices reversed, ending the day on the negative side.The US Dollar Index, which measures the strength of the USD against a basket of six currencies, also rose by 0.2%, reaching 93.918 late on Friday. The late-night strength of the US dollar caused a decline in the yellow metal prices. Since early August, the US dollar has been gaining, despite the delayed US financial support for the economy, a record recession, historic unemployment figures, and other economic damage caused by the coronavirus pandemic. The gains in the US dollar in this dramatic situation were due to its safe-haven status, which has been restored.Meanwhile, the gold prices were also under pressure on Friday, as the US stimulus package had still not been delivered. The Republicans and the Democrats have been unable to agree on the size of the next aid package, with the former suggesting it should be around $ 1.5 trillion and the latter proposing a $ 2.2 trillion package.

On the data front, the important United States employment figures were released at 17:30 GMT. They included the Average Hourly Earnings, which declined to 0.1% in September, against the projected 0.5%, putting pressure on the US dollar. The Non-Farm Employment Change also dropped to 661K from the expected 900K, likewise weighing on the US dollar.

However, the decline in the Unemployment Rate for September, to 7.9%, against the expected 8.2%, lent some support to the US dollar. At 19:00 GMT, the Revised UoM Consumer Sentiment from the United States rose to 80.4 points, against the projected 78.9, boosting the greenback. However, the Revised UoM Inflation Expectations declined to 2.6% in September, from the previous 2.7%.

The strong US dollar, due to the low unemployment rate and revised consumer confidence regarding the economy, strengthened the greenback and weighed on gold prices. Meanwhile, on Friday, the Philadelphia Fed President, Patrick Harker, said that the Federal Reserve’s new framework would allow for slightly higher inflation, in order to close the employment gaps in the economy. He stated however, that employers and state governments would need to do more to ensure that these gains reach lower-income workers.

Harker urged and stressed the need to build an equitable workforce recovery. He added that many jobs lost during the pandemic might not recover, which has increased the need for programs that will help to prepare workers for jobs with better pay and career opportunities.
Harker’s comments also helped the US dollar gain traction on the day, and weighed on the gold prices.

Crazy Movement in BTC/USD - Is It Going to Break Double Top?
1 day ago

Bitcoin Plunges Over 9% - A Quick Technical Outlook!
2 days ago
Comments