Daily Brief, October 16 – Everything You Need to Know About Gold Today! - Forex News by FX Leaders 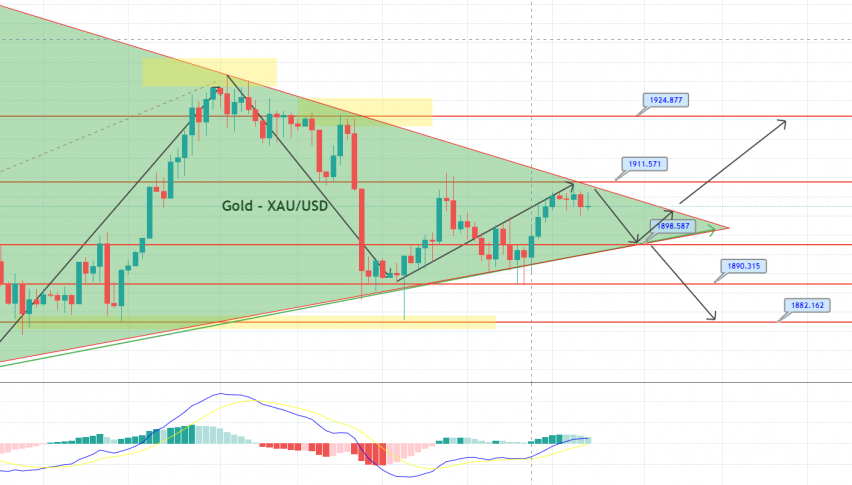 Daily Brief, October 16 – Everything You Need to Know About Gold Today!

The gold prices closed at 1,908.21, after placing a high of 1,908.87, and a low of 1889.47. Overall, the movement of gold remained bullish throughout the day. On Thursday, prices for the yellow metal settled in the green zone for the second day straight, above the $ 1,900 level, despite the confusion over the Trump administration’s intentions for a new COVID-19 relief package.
On Tuesday, US Treasury Secretary Steven Mnuchin said that there would be no agreement on a coronavirus stimulus package between him and Democrat Nancy Pelosi anytime soon. After that, talks between the White House and the Senate took place on Thursday, but the two parties could not resolve their differences. In an interview on Thursday, Mnuchin said he was open to doing a modest and targeted deal with Pelosi. He also suggested that Pelosi should agree to release 300 billion dollars to needy Americans. In response, Nancy Pelosi argued that US President Donald Trump did not really want to help the struggling poor –  he was merely seeking a symbolic victory ahead of the November 3 election. Pelosi refused to go ahead with half a stimulus measure package, and stuck to her proposed $ 2.2 trillion package.The back-and-forth situation regarding the stimulus measure package raised uncertainty and supported the gold prices on Thursday. On the other hand, the United States Unemployment Claims from the previous week, which came in at 898K against the projected 810K and the previous 845K, also boosted the yellow metal. The Empire State Manufacturing Index from the US also dropped, coming in at 10.5 against the projected 13.9, weighing on the US dollar.

The continuous increase in the weekly initial jobless claims, from week to week, presents a very ugly picture of the US economy. The number of Americans filing for jobless claims has risen 4 times, compared to pre-pandemic levels. Analysts believe that this is an alarming situation that is causing permanent damage to the labor market. The rising number of unemployment claims weighed on the US dollar, ultimately pushing gold prices higher.

On Thursday, Dallas Federal Reserve President Robert Kaplan said that women and minorities who have been affected by the pandemic-related job losses would need help getting back to work, as more economic activity shifts into sectors less dependent on face-to-face interaction. The Fed’s vice-chair of supervision, Randal Quarles, said that more reforms were probably needed in the short-term funding market.

Most of these comments by Fed officials were related to further support for Americans by the government. These calls for stimulus measures in the uncertain environment also added to the gains in the yellow metal.