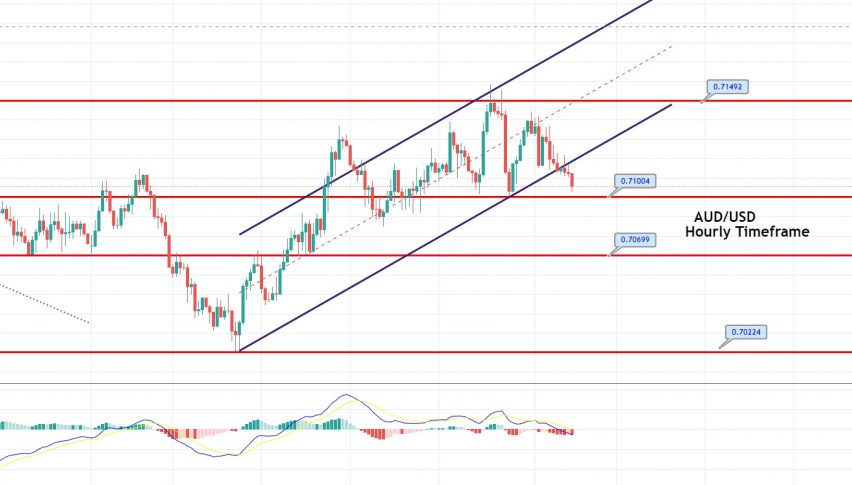 The AUD/USD pair closed at 0.71168, after placing a high of 0.71249 and a low of 0.70848. Generally, the movement of the AUD/USD pair remained slightly bullish during the day. The Australian dollar posted gains for the second consecutive day on Thursday, despite the strong rebound of the US dollar. During the early trading session, the AUD/USD pair dropped, losing some of its previous daily gains, however the pair managed to recover its losses and returned to the upside in the late trading session, due to the improved risk sentiment.

The decline in the AUD/USD prices in the early trading sessions on Thursday was due to the rising US dollar. The US Dollar Index rebounded from its seven-week lowest level on Thursday, to 92.97, before rising by 0.4%. The strong comeback in the greenback was due to the faded hopes of the US stimulus package being delivered before elections.

The talks between the Republican Mnuchin and the Democrat Pelosi continued on the day, but failed to provide any prospect that the relief bill could be delivered before elections. Even if the relief bill is agreed tomorrow, the bill cannot be executed before elections, so the traders moved back towards the US dollar. The strong US dollar weighed on the AUD/USD, and the pair dropped to the 0.70848 level.

There was no macroeconomic data to be released on Thursday from the Australian side, and the pair AUD/USD followed the movements of the US dollar.

The upside attempts of the AUD/USD pair remained limited, due to the RBA’s monetary policy stance, especially after the central bank acknowledged last week that further monetary tightening was on the table. The risk sentiment also improved in the market after the hopes for a US stimulus package faded away, and the improved risk sentiment supported the riskier Aussie, adding to the AUD/USD pair’s gains. Over the next days, the focus of the market participants will remain on the Final PMI figures from the Manufacturing & Services sectors, in order to find fresh clues about the movement of the pair.

The AUD/USD pair is trading with a bearish bias, especially after violating the upward channel, that was extending support at the 0.7100 level. On the lower side, the AUD/USD may find immediate support at the 0.7100 area, and violation of this level could lead the price of the AUD/USD price towards the next support level at the 0.7070 mark. The MACD is in a selling zone; therefore, we should look for a selling trade as soon as the 0.7070 level is violated. Good luck!

Bitcoin Plunges Over 9% - A Quick Technical Outlook!
14 hours ago

List of US Companies Releasing Earnings (EPS) Today
16 hours ago

Daily Brief, November 26 - Everything You Need to Know About Gold Today!
16 hours ago
Comments