Earlier in the day, the US Dollar Index (DXY) rose to its highest level in more than a week, at the 93.65 level on Wednesday, supporting the USD/CAD pair’s upside momentum. The risk-averse market sentiment increased after the rising number of coronavirus cases pushed many countries into re-introducing lockdown measures. Germany will enter into a month-long partial lockdown on November 3, as announced by the government on Wednesday. France is already under curfew and will enter into lockdown on Friday. Spain has already introduced lockdowns, which are expected to continue for about six months.

The virus situation supported the safe-haven flows in the market and pushed the greenback up, ultimately lifting the USD/CAD pair. Meanwhile, there were no surprises from the Bank of Canada on Wednesday – it maintained the overnight rate at 0.25% for the seventh consecutive month. The BOC also continued its C$ 5 billion in government bonds weekly under its QE program.

Despite the rising number of coronavirus cases in October, the economy was recovering faster than expected. Inflation was heading higher and the employment releases were stronger than expected. The Bank of Canada expected the Canadian economy to grow close to 4% in 2021 compared to its previous forecast of a decline of 5.5% in 2020. The Bank of Canada has pledged to keep its interest rates near zero until the economy gains strength and inflation reaches its target of 2%. The Canadian dollar went down after the release of the expected policy statement, pushing the USD/CAD pair higher. 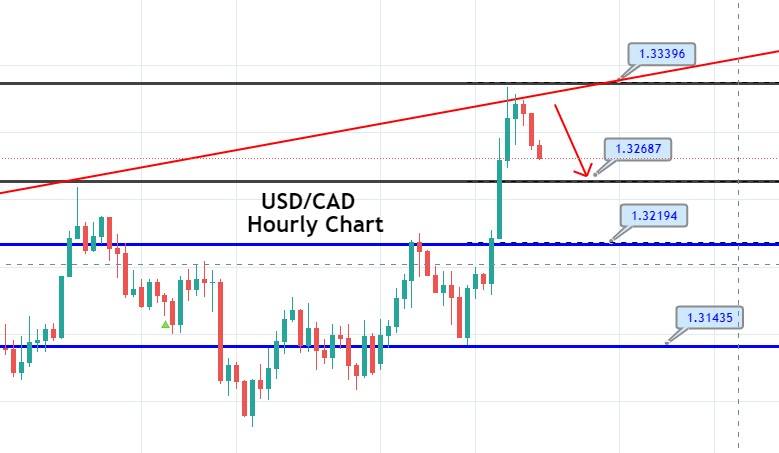 The USD/CAD pair faces immediate resistance at the 1.3339 level, and closing below this level is likely to drive selling trends until the 1.3258 level. However, the violation of the USD/CAD is likely to lead the pair towards the next support areas of 1.3258 and 1.3219. Further towwards the lower side, the USD/CAD pair may dip until the 1.3143 area. Let’s look for selling below the 1.3396 level today. Good luck!