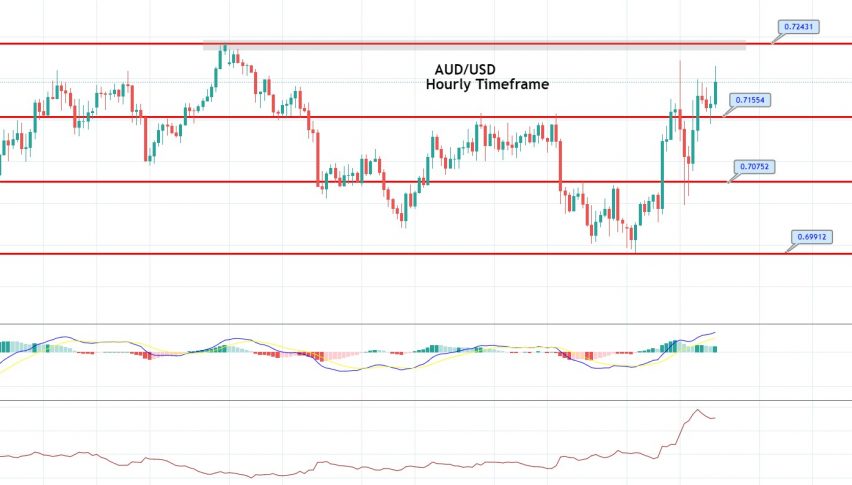 During Thursday’s early Asian trading session, the AUD/USD currency pair stopped its delining streak of the previous day, and drew some fresh bids around the 0.7200 level, mainly due to the risk-on market sentiment, underpinning the Australian dollar, which is perceived as a risk currency and, in turn contributing to the gains in the currency pair. The market trading sentiment has therefore been supported by the latest reports suggesting that the former Vice President, Joe Biden, has recently taken the lead in Michigan, which has raised possibilities of US stimulus packages being approved, as the Biden administration earlier expressed their willingness to pass oversized stimulus packages, in an effort to boost the economy, which has been so hard-hit by the COVID-19 pandemic. Across the pond, the selling bias surrounding the broad-based US dollar, triggered by the market risk-on sentiment, also played a major role in supporting the currency pair.

Moreover, the losses for the greenback were further bolstered by the intensifying doubts over the US economic recovery. That was witnessed after the ADP report showed that private-sector employers added less jobs than expected, amounting to 365K jobs in October. On the contrary, the long-lasting coronavirus woes globally, and delays in the release of the US COVID-19 stimulus package, keep challenging the upbeat market sentiment. This has become a key factor that has kept a lid on any additional gains for the currency pair. The AUD/USD pair is currently trading at 0.7174, and consolidating in the range between 0.7050 and 0.7220.

The market trading sentiment managed to regain lost ground, turning bullish as investors welcomed the blue shift in the US vote count, with the Democrat candidate, Joe Biden, taking the lead in key states Wisconsin, Michigan and Nevada, one of the states that is likely to play a key role in the outcome. Thus, the increasing probabilities of Biden’s victory have boosted investor confidence, as the Biden administration is expected to pass oversized stimulus packages to boost the flailing economy after the COVID-19 crisis. As a result, the US equity futures started to flash green, which tends to undermine the demand for traditional safe-haven assets like the US dollar.

Across the ocean, the bullish sentiment surrounding the equity market was further bolstered after China’s Caixin services PMI for October came in at 56.8 vs. the previous 54.8, which rekindled hopes of economic recovery and underpinned the market trading sentiment.

As a result, the broad-based US dollar failed to extend its gaining streak of the previous day, and came under pressure after Reuters reported that the incumbent President Donald Trump’s lead had narrowed in the key battleground state of Michigan. Apart from this, the losses in the US dollar were further bolstered after the ADP report showed that private-sector employers had added less jobs than expected – just 365K jobs in October compared to the previous month’s upwardly revised reading of 753K. Meanwhile, the resurgence of the coronavirus keeps fueling fears that the US economic recovery could come to a halt, which is also putting the greenback under pressure. Thus, the losses in the US dollar have become a key factor that is keeping the AUD/USD currency pair higher. In the meantime, the US Dollar Index, which tracks the greenback against a basket of other currencies, has dropped to 93.490.

On the contrary, the intensifying coronavirus woes across the globe and intensifying lockdown restrictions in Europe and the UK keep challenging the upbeat market sentiment and this has become a key factor that has kept a lid on any additional gains in the currency pair. Moving ahead, the market traders will keep their eyes on the US economic calendar, which will show the releases of Unemployment Claims, Prelim Nonfarm Productivity q/q, and Prelim Unit Labor Costs q/q. Meanwhile, the FOMC Statement and the FOMC Press Conference will also be closely observed for fresh direction. Of course, the continuous drama surrounding the US elections and updates about the US stimulus package will not lose any significance on the day.

Choppy trading continues for the AUD/USD, as it meets the critical resistance mark at the 0.7160 level and a support zone of 0.7140. The bullish violation of the 0.7190 mark could extend the buying trend until the 0.7220 level. Conversely, the bearish breakout at the 0.7140 level could drive the selling bias until 0.7060. All eyes are fixed on the outcome of the US elections. Good luck!