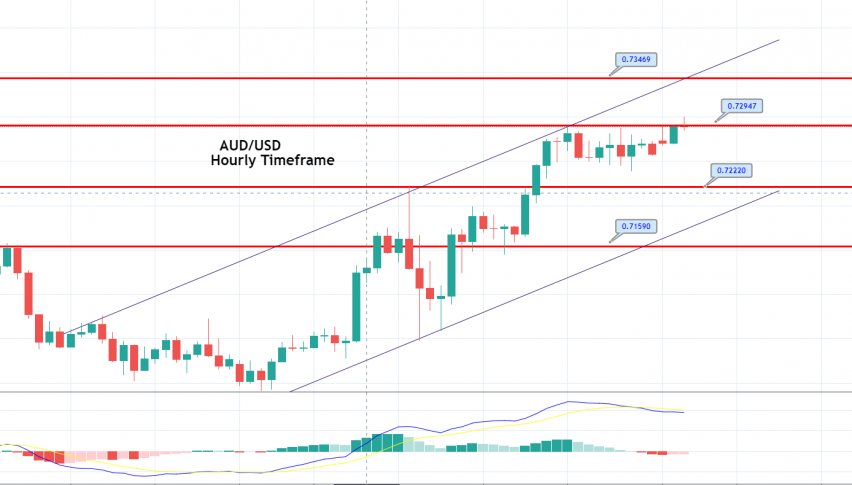 The AUD/USD closed at 0.72614, after placing a high of 0.72870, and a low of 0.72386. The AUD/USD pair remained consolidated on Friday, posting small losses after rising continuously for four days.

The AUD/USD pair ignored the weakness of the broad-based US dollar on Friday, and started losing a small portion of its previous gains, based on strong macroeconomic data from the US side.

On the data front, at 02:30 GMT, the AIG Services Index came in at 51.4, compared to the previous 36.2. From the US side, at 18:30 GMT, the Average Hourly Earnings for October indicated a drop to 0.1%, from the projected 0.2%, weighing on the US dollar. For October, the Non-Farm Employment Change rose to 638K, against the anticipated 595K. lending support to the greenback and dragging the AUD/USD pair onto the low side. The Unemployment Rate from the US for October fell to 6.9%, against the predicted 7.7%, boosting the US dollar and adding further to the losses in the AUD/USD pair’s losses.

At 20:00 GMT, the Final Wholesale Inventories for September came in at 0.4% against the estimated -0.1%, putting pressure on the US dollar. However, the losses in the AUD/USD currency pair were limited on Friday, due to the chances of Joe Biden’s victory in the US elections. He is expected to deliver a larger stimulus package that will devalue the US dollar, and the investors were already pricing it.

Furthermore, the Reserve Bank of Australia released an updated Australian growth forecast in the quarterly statement on monetary policy on Friday. According to the report, the bank increased the forecast for near-term economic activity and warned that a radical downturn in population growth meant the economy would be significantly smaller than expected before the pandemic.

The statement also claimed that the country had reopened after the coronavirus lockdowns and was  on its way to recovery; however, the path ahead will be rocky and uncertain. The bank pledged to buy A$ 100 billion in government bonds over the next six months, with the aim of lowering borrowing costs. It also cut its interest rates to the lowest level ever, at 0.1%, earlier in the week. The bank committed to not raising rates until inflation reaches its target of 2-3%, which is not expected for at least three more years.

The AUD/USD pair is trading with a bullish bias in the 0.7294 range, facing a solid resistance at the 0.7294 level, extended by a triple top pattern. On the higher side, the bullish crossover could extend the buying trend until the 0.7346 level. At the same time, the support continues to hold at the 0.7220 level today. The MACD is trading with a neutral bias; however, it could turn bullish if the AUD/USD manages to cross over the 0.7295 level. Good luck!