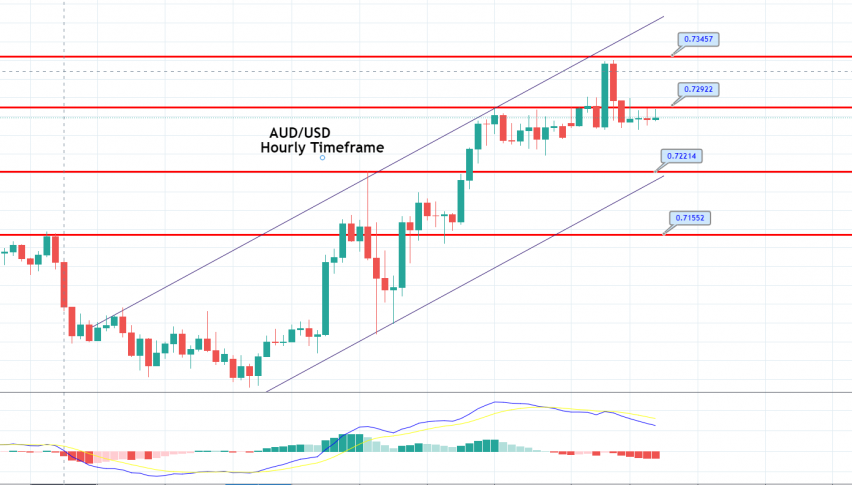 AUD/USD Continues to Trade on an Upward Channel – A Quick Trade Plan!

The AUD/USD pair closed at 0.72791, after placing a high of 0.73397, and a low of 0.72663. On Monday, the currency pair soared to its highest level since September 16, due to the increased risk appetite. However, the gains in the AUD/USD pair were reduced and they lost in the late trading session, as the US dollar bounced back.

The risk appetite in the market was supported by the latest announcement from Pfizer and its German partner BioNtech who claim 90% efficiency of their vaccine candidate in preventing  infection with the coronavirus. They have also announced that they will be applying for emergency-use approval of their vaccine in the US later this month.

This news raised the risk-on market sentiment and supported the upward momentum of the AUD/USD pair on Monday, with the pair reaching its highest level since mid-September, amid the increased risk appetite that was already high due to Joe Biden’s victory in the US elections.

Joe Biden became the 46th President of the United States over the weekend, after gaining more Electoral College votes than Donald Trump, raising hopes for a massive stimulus package, the lack of which has been weighing on the US dollar for months. However, after the news about the vaccine development, the need for a stimulus package decreased, and the US dollar rebounded, ultimately putting pressure on the AUDF/USD currency pair.

Meanwhile, Cleveland Federal Reserve Bank President Loretta Mester said on Monday that the Fed was not out of ammunition to assist the economy, and that it could offer more assistance by adjusting its asset purchase program and implementing other tools.

She stated that the economy had recovered more powerfully than estimated, but gains have not been equally spread. Despite the optimistic news from Pfizer and BioNtech on Monday, regarding their coronavirus vaccine, Mester said that economic growth would be slow and steady. These comments also weighed on the market sentiment and forced the AUD/USD pair to lose most of its daily gains on Monday.