The AUD/USD pair closed at 0.74156, after placing a high of 0.74195, and a low of 0.73511. On Wednesday, the AUD/USD currency pair rose to its highest level in two months, on the back of rising risk sentiment in the market and the declining demand for the US dollar.

All the factors on Wednesday favored the AUD/USD currency pair, as it is considered a risk-sensitive pair. The latest news from Pfizer and BioNtech, that they have become the first company in the world to get approval for widespread use of their vaccine, strengthened the Aussie, which is perceived as risky, and supported the upward momentum of AUD/USD pair.

Meanwhile, the US dollar was also weak across the board, because of the rising hopes for the next round of a stimulus package from Congress. The prospects of the stimulus relief bill have risen as the top officials called for it, and the economic outlook has deteriorated.

The US dollar was also weak across the board, because of the rising number of coronavirus cases in the USA. The deaths from coronavirus and the hospitalization numbers have also increased to an alarming level in the US. On Wednesday, the US recorded its highest hospitalization rate ever in a single day, with 100,200 new patients being admitted. After this news, the US Dollar Index fell to its lowest level in more than 30 months, at 91.10 and supported the AUD/USD pair’s upward momentum.

On Wednesday, the Governor of the Reserve Bank of Australia said that it was a good time for first-time home buyers in Australia, because conditions were working strongly in their favor. Meanwhile, on the data front, at 05:30 GMT, the Gross Domestic Product from Australia for the quarter rose to 3.3%, against the projected 2.5%, supporting the Australian dollar. From the US side, at 18:15 GMT, the ADP Non-Farm Employment Change for November came in, showing a drop to 307K, against the projected 433K, weighing on the US dollar, and supporting the upward momentum of AUD/USD pair upward. 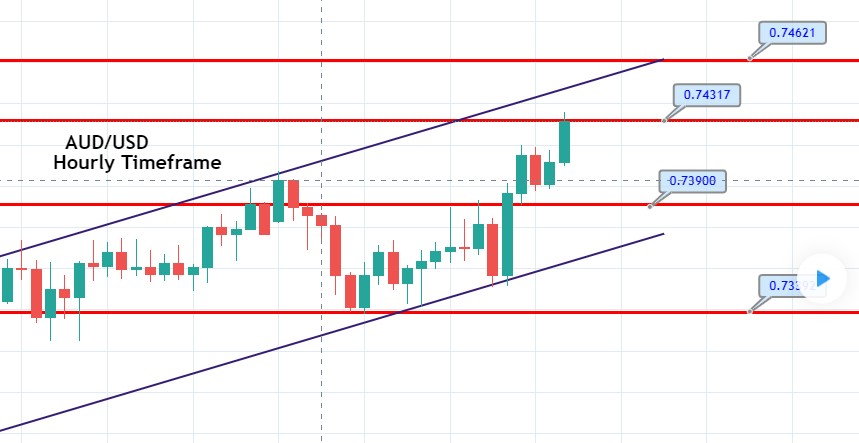 The AUD/USD pair is trading bullishly at the 0.7430 level, and it seems set to break above an immediate resistance level at the 0.7430 mark. On the upper side, the AUD/USD pair may head higher until the next target level of 0.7462. Thus, we have entered a buying trade signal to capture a quick 40 pips. Good luck!

Yellen To Be Confirmed As Next U.S. Treasury Secretary
11 hours ago

Selling AUD/USD at the 100 SMA, Which Has Turned Into Resistance
14 hours ago
Comments