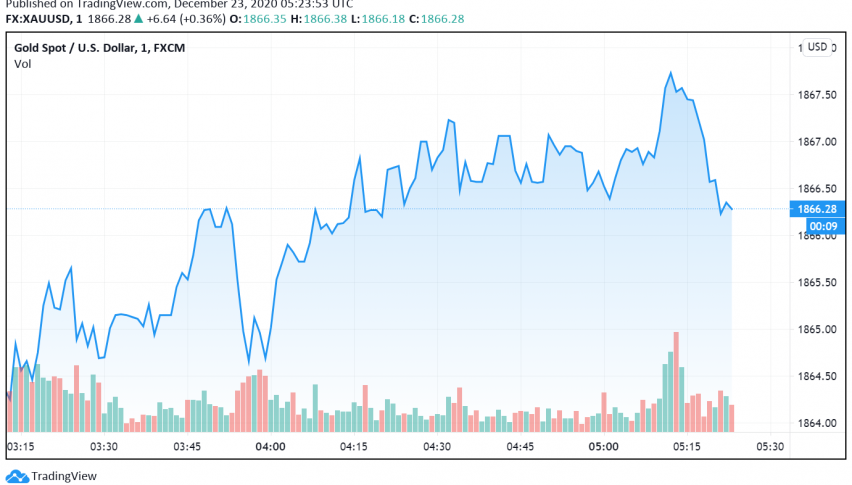 On Wednesday, gold prices are climbing higher amid the risk-off mood in global financial markets over worries about the economic impact of the new strain of coronavirus even as the US released disappointing economic data highlighting the need for more fiscal stimulus. At the time of writing, GOLD is trading at a little above $1,866.

Several countries worldwide have banned international travel of both freight and passengers from the UK. In addition, pharmaceutical companies have also started rushing to test their vaccines under development to assess their effectiveness in controlling this latest strain of the virus.

The safe haven appeal of gold has strengthened over renewed worries that the ongoing pandemic could hurt the global economy more severely, despite the vaccines that have begun rolling out in some parts of the world, including Britain. Despite the rollout, the number of fresh infections continues to soar, across Britain, the US and many other parts of the world, raising fears that governments could announce tighter lockdowns and restrictions.

Meanwhile, gold prices also received support after consumer confidence in the US fell to the lowest level seen in four months during December even as home sales in the country also declined, heightening worries that the US economy has been impacted significantly by the pandemic. Meanwhile, the coronavirus relief package ran into some more trouble after President Trump threatened to not sign it unless the Congress makes some changes to it.

Forex & Commodities Trading Levels to Watch on Wednesday
19 hours ago