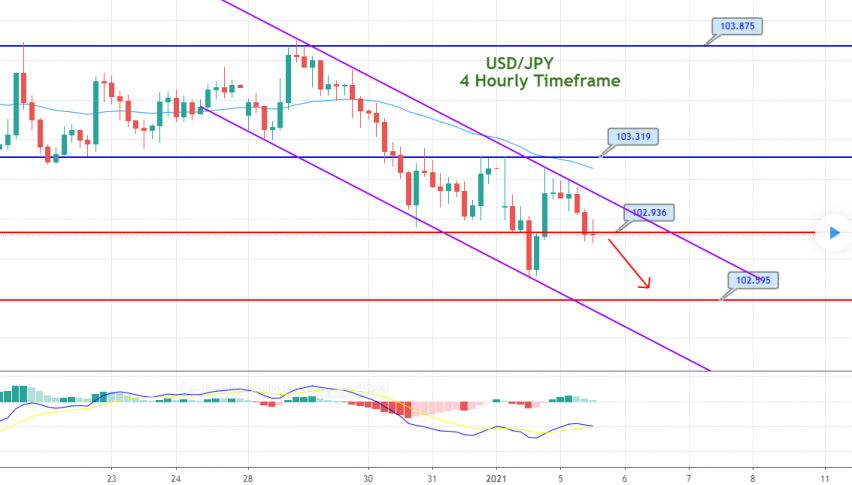 Bullish Bias in Japanese Yen Dominates – Sell Trade in the EUR/JPY and USD/JPY!

During Tuesday’s early European trading session, the USD/JPY currency pair failed to stop its early-day losing streak, dropping well below the 103.00 level. However, the prevalent bearish bias was mainly supported by intensified worries over the continuous surge in new COVID-19 cases, which is underpinning the safe-haven Japanese yen and contributing to the gains in the currency pair. Apart from this, the market trading sentiment was further pressured by the cautious sentiment ahead of the Georgia elections and the Sino-American tussle, which put some additional pressure on the currency pair. Across the pond, the weakness of the broad-based US dollar, triggered by multiple factors, could also be considered as one of the key determinants that has dragged the currency pair lower.

On the contrary, the optimism over the rollout of vaccines for the highly contagious disease is helping to limit deeper losses in terms of the market trading sentiment. The USD/JPY is trading at 102.84, and consolidating in the range between 102.83 and 103.19.

The market risk tone failed to extend its positive momentum of the previous day, and started to flash red on the day, as the resurgence of (COVID-19) cases fueled worries over global economic recovery. Meanwhile, the cautious sentiment ahead of the Georgia election, couple with the Sino-American tussle, also played a major role in undermining the risk sentiment. The increasing tension between the US and China also exerted downside pressure on the market. This, in turn, underpinned the safe-haven Japanese yen and added to the pair’s losses.

Looking forward, the market traders will keep their eyes on the German Unemployment Rate, which is due at 08:55 GMT, and the US ISM Manufacturing, which is scheduled for release at 15:00 GMT. Meanwhile, the updates about the US stimulus package will be key to watch. Furthermore, the risk catalysts, like geopolitics and the virus woes, not to forget Brexit, will not lose their importance.

Is the Bearish Trend Over for USD/JPY?
14 hours ago