Daily Brief, January 13 – Everything You Need to Know About Gold Today! - Forex News by FX Leaders 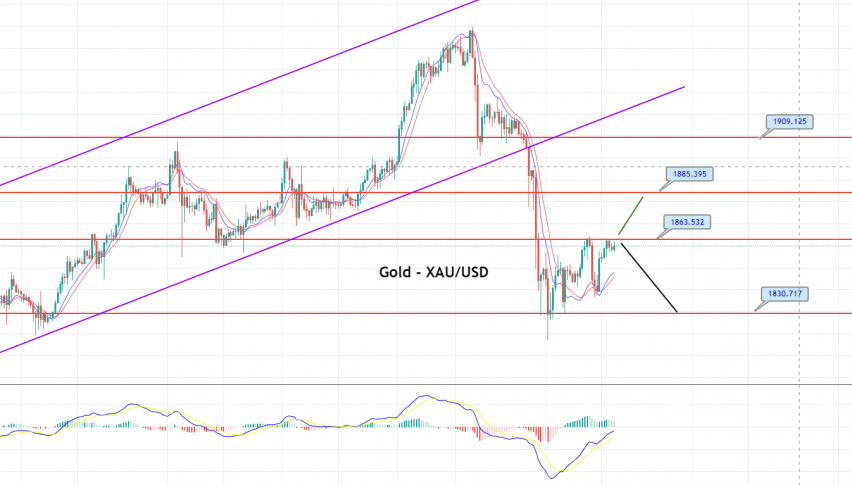 Daily Brief, January 13 – Everything You Need to Know About Gold Today!

The GOLD prices closed at 1,854.45, after placing a high of 1,863.74, and a low of 1,836.83. After falling for four consecutive sessions, the GOLD prices rose on Tuesday, posting gains as the US dollar and Treasury Yields eased, while the prospects of higher inflation, driven by more US fiscal stimulus, provided further support for the metal.

The US Dollar Index (DXY) fell almost 0.3% against its rivals on Tuesday, while the 10-year US Treasury Yields fell to a session low of 1.146%. The US stocks opened higher on Tuesday, rebounding from the previous session’s losses, with investors looking for additional fiscal stimulus, amid continued political turmoil. The Dow Jones Industrial Average closed 0.3% down, and the S&P 500 closed 0.6% lower, while NASDAQ fell by 1.2%.

The United States lost more than 22,000 Americans to coronavirus last week, which was a second straight weekly record that brought the death toll to 375,000. The rising number of deaths and the associated economic damage prompted President-elect Joe Biden to promise further economic stimulus to the tune of trillions of dollars late last week. More details are expected to follow in a formal announcement on Thursday, and this has been supporting markets at their current elevated level.

Meanwhile, the House of Representatives introduced an impeachment article on Monday, accusing Trump of incitement of insurrection, on which they plan to vote on it this week. This came in after last week’s violent scenes on Capitol Hill that were encouraged by Trump.

Furthermore, the safe-haven appeal rose on Tuesday, after fears mounted that there could be further disruptions in the days leading up to Biden’s inauguration on January 20. The FBI has stated that it has received information indicating that armed protests ae being planned at all 50 state capitals and Washington. The FBI’s comments also supported the prices of the yellow metal, as the risk-off sentiment emerged in the market.
On the data front, at 20:00 GMT, the JOLTS Job Openings for November came it at 6.53M, which was up compared to the predicted 6.42M and supported the US dollar, capping any further gains in the yellow metal. At 20:02 GMT, the IBD/TIPP Economic Optimism figures were released, coming in line with the expectations of 50.1.
The Federal Reserve Governor, Lael Brainard, said on Tuesday that the federal banking agencies were in the process of drafting requests for information on the risk management of artificial intelligence applications in financial services. The president of the Boston Federal Reserve Bank, Eric Rosengren, said on Tuesday that the US economy could see a strong rebound in the second half of this year, as coronavirus vaccinations became widely available, but the virus was still driving the economy and monetary policy will remain accommodative.The gains in the GOLD prices were capped on Tuesday after the Trump administration said that it was releasing millions of doses ofcoronavirus vaccine, which it had been holding back for second shots, and urged states to offer them to all Americans over the age of 65 or those suffering from chronic health conditions.

GOLD is trading sideways in the area around 1,859, facing immediate resistance at the 1,863 level. On the lower side, GOLD may find support at the 1,849 level, and violation of this level could extend selling until 1,837. The 50 periods EMA suggests chances of a buying trend, but the double top resistance level is weighted at 1,863. Above the 1,863 level, the GOLD price could soar until the 1,892 mark. Good luck!

Yellen To Be Confirmed As Next U.S. Treasury Secretary
9 hours ago

USD/CAD Bounces Off the 50 SMA, Despite the Upbeat Canadian Wholesale Figures
10 hours ago
Comments