Daily Brief, Jan 25 – Everything You Need to Know About Gold Today! - Forex News by FX Leaders

Daily Brief, Jan 25 – Everything You Need to Know About Gold Today!

Prices for the yellow metal, GOLD, closed at 1,855.22, after placing a high of 1,870.65, and a low of 1,837.28. The GOLD prices fell more than 1% on Friday, amid the broad-based strength of the US dollar and improving selling sentiment, while the hopes for further stimulus from the US government resulted in gains this week, for the first time in three weeks.

The US dollar was strong, due to the rising benchmark US Treasury Yields, which rose above 1%, supporting the greenback and weighing on the yellow metal. The Global Equities benchmark slipped from record highs, whereas the dollar edged higher against its main rival currencies. Another factor involved in the strength of the US dollar was the stronger-than-expected US macroeconomic data on Friday. At 19:45 GMT, the Flash Manufacturing PMI came in, showing a rise to 59.1, against the expected 56.6, which supported the US dollar and ultimately put pressure on the gold prices. The Flash Services PMI also rose, coming in at 57.5, against the expected 53.3, boosting the US dollar and dragging the gold prices to the downside. At 20:00 GMT, the Existing Home Sales sigures were released. They also improved, rising to 6.76M, against the expected 6.55M, which boosted the US dollar and added to the losses for the yellow metal on Friday.

The yellow metal fell to 1,837, on the back of the strength of the greenback. However, the losses were half recovered during the late trading hours on Friday, as the latest news about the UK variant of the coronavirus hit the market. A report released by the UK on Friday stated that there was a realistic possibility that the new variant that originally emerged in the UK would result in more deaths than other variants. The data was not conclusive, but UK PM Boris Johnson said that there was some evidence that the new variant may be associated with a higher degree of mortality.

Meanwhile, a senior US public health official has said that President Joe Biden will impose a ban on most non-US citizens entering the country if they have recently been in South Africa, starting Saturday, in a bid to contain the spread of a new variant of COVID-19.

On Monday, President Biden will also re-impose an entry ban on nearly all non-US travelers from Brazil, the UK, Ireland and 26 European countries that allow travel across open borders. The United States has confirmed more than 25 million coronavirus cases, which is the highest number in the world. The chief of staff of the recenly inaugurated President Biden has accused Donald Trump’s administration of failing to provide states with a plan to administer the much-needed vaccines.

According to Johns Hopkins University data, the US accounts for more than a quarter of all coronavirus cases globally. The country has hopes that vaccines will help curb the  disease; however, there have reports of state-level delays in vaccine distribution and shortages in some parts of the country. The US Centers for Disease Control and Prevention have also said that about half of the 41.4 million vaccine doses that have been distributed to US states have been administered so far. Top US infectious disease expert, Anthony Fauci, who worked on the coronavirus task force under Trump, also said on Friday that the previous administration had left too much of the responsibility to the states.

The massive spread of the coronavirus and the critiscism by the White House regarding the chaotic vaccine rollout by the previous government raised concerns about the future of the US economy, weighing on the local currency and ultimately leading to the recovery of most of the yellow metal’s daily losses. 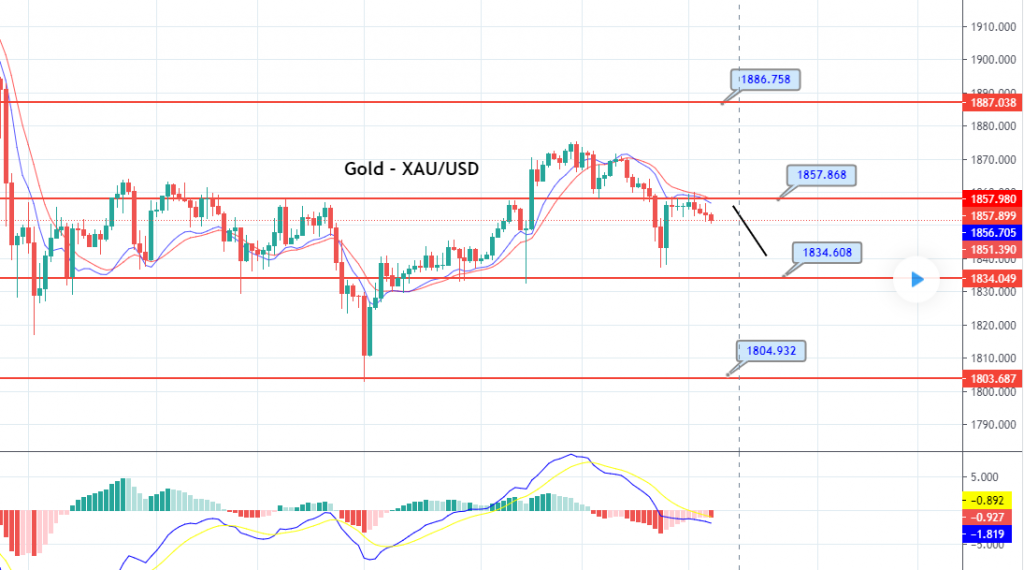 The technical side of GOLD continues to remain unchanged, with GOLD trading sideways between 1,859 and 1,850. GOLD is likely to find resistance at the 1,870 level, upon a bullish breakout at 1,859. But a bearish breakout at 1,850 could trigger a selling trend until 1,841. The RSI and MACD are supporting a selling bias, along with the 50 periods EMA. We might see some selling below 1,859, specially if the breakout of the 1,853 support level is seen today. Good luck!