Daily Brief, February 18 – Everything You Need to Know About Gold Today! - Forex News by FX Leaders 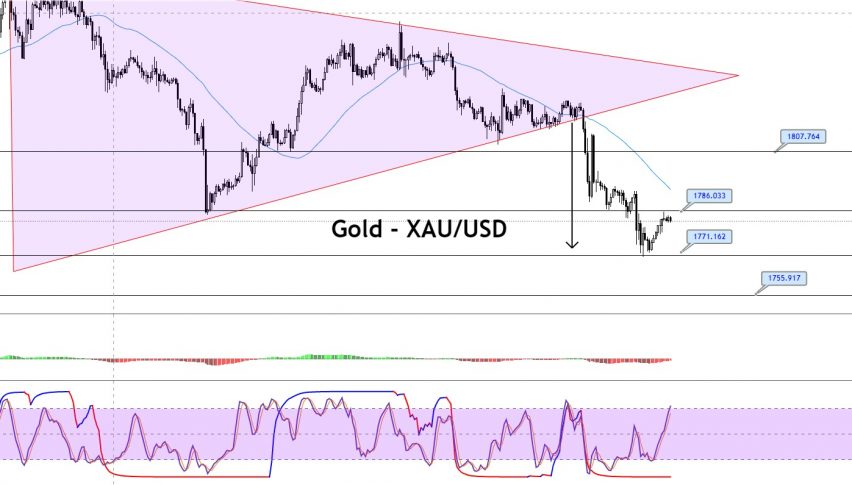 Daily Brief, February 18 – Everything You Need to Know About Gold Today!

The precious metal, GOLD, closed at 1,775.91, after placing a high of 1,795.05, and a low of 1,769.41. The yellow metal prices extended their losses for the 5th consecutive session on Wednesday, dropping to their lowest level since November 29. The decline in gold was caused by the rising demand for the US dollar and increased hopes of economic recovery, along with the more robust US Treasury yields, which weighed on the yellow metal and added to its losses on Wednesday.

Last year, gold posted its biggest annual gain in a decade, and now it has dropped more than 6% in 2021, on the back of rising expectations in terms of growth optimism, driven by the progress in vaccination programs and more economic aid. After forming a so-called death-cross pattern, the gold prices extended their losses, as the gains in 10-year Treasury yields also put a burden on the demand for non-interest bearing bullion. Furthermore, the US stock indexes also rose to all-time high levels of optimism surrounding the proposed $ 1.9 trillion US Coronavirus relief package, which ultimately added to the losses in the safe-haven metal.

On Wednesday, San Francisco Federal Reserve President Mary Daly said that there was currently no risk of inflation being too high, adding that fears of inflation could cost the US economy millions of jobs. These comments by Daly weighed on the US dollar and capped further losses in the yellow metal. Late on Tuesday, Michelle Bowman of the Federal Reserve Board of Governors, signaled a new approach to antitrust regulation for smaller financial institutions. Bowman said that the Federal Reserve has not significantly changed its competition policy in the past couple of decades. The new change in its framework for antitrust analysis was announced to shift market dynamics and increase competition in the financial industry.

On the back of a stronger dollar, prices for the precious metal, GOLD, fell sharply, from around 1,794, to the 1,770 range. On the four-hourly timeframes, gold has violated the double bottom support area of 1,788, which is now working as a resistance level for gold. On the lower side, gold could exhibit a selling trend until the 1,772 area for now. The immediate support remains around the 1,799 level, which could trigger a slight buying/correction until the 1,800 range, but odds of selling remain solid until 1,762. The selling bias remains strong below 1,788 and 1,793. Good luck!