Daily Brief March 02 – Everything You Need to Know About Gold Today! - Forex News by FX Leaders

Daily Brief March 02 – Everything You Need to Know About Gold Today!

The precious metal, GOLD, closed at 1,723.24, after placing a high of 1,759.86, and a low of 1,719.65. On Monday, the GOLD price rose in the first half of the day, attempting to recover some of its losses of the previous day, but it failed to remain at that position for long, and the direction reversed. GOLD started placing losses in the second half of the day, and it continued its bearish streak for the 5th consecutive day. The weakness in the US dollar caused the rebound in gold prices in the first half of the day. The US dollar also came under pressure on Monday, after the US House of Representatives passed a massive $ 1.9 trillion stimulus package. Early on Saturday, we saw Joe Biden’s first legislative victory after the Senate passed the US stimulus package. As a result, the US dollar index fell from a one-week high, which weighed on the greenback, ultimately lending strength to the yellow metal prices. The US Treasury yields, on a 10-year note, also fell from a one-week high, to trade near 1.43%, ultimately weighing on the US dollar and adding strength to the GOLD prices in the first half of the day.

However, GOLD was unable to hold onto its gains for long, and it started to decline after the risk appetite returned in the market. The risk flows were supported by the rising prices of equities and stocks in the market after the optimism surrounding the hopes of economic recovery increased. Johnson & Johnson has now obtained approval from the US Food and Drug Administration for emergency use of its coronavirus vaccine, making it the third company to get approval from the US FDA after Pfizer-BioNTech and Moderna.

Use of the J&J vaccine could start as early as Tuesday, and it will dramatically increase the number of Americans who can be vaccinated in the coming weeks, which will eventually enable the full reopening of the economy and add to the value of the US dollar. These expectations boosted the US dollar, and put the GOLD prices under pressure, resulting in a decline.

The macroeconomic data from the US also helped the US dollar gain traction and put further pressure on the yellow metal prices on yesterday. Meanwhile, on Monday, Federal Reserve Governor Lael Brainard described a broad regulatory reform agenda for the coming months, to fix a financial system that has proven insufficient in terms of standing up against the pandemic-induced economic crisis. She added that the COVID-19 shock should be used as an opportunity to learn lessons to make the system more resilient and better able to survive through a variety of possible shocks in the future. New York Federal Reserve President John Williams gave a speech on Monday, which was closely observed by the GOLD traders. 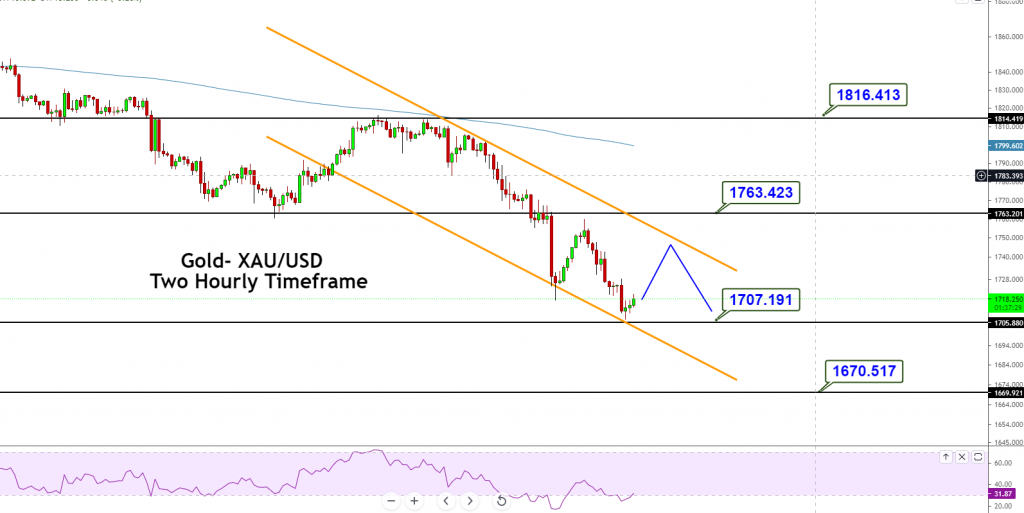