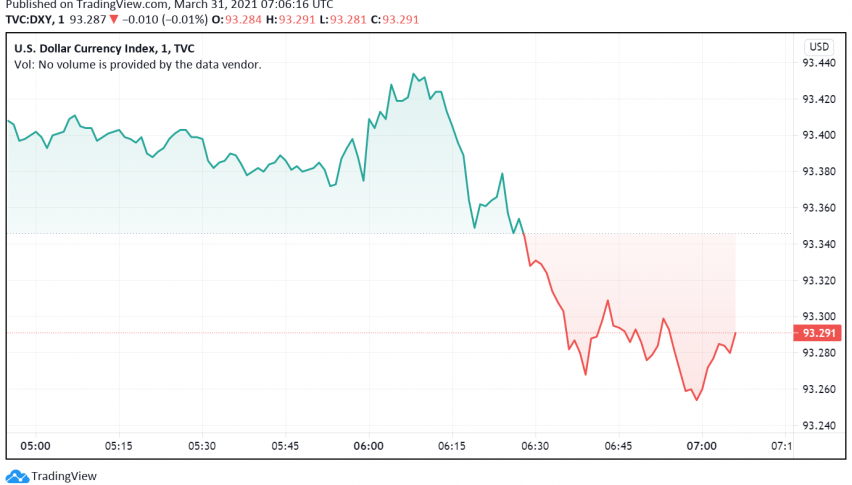 Early on Wednesday, the US dollar has touched the highest level seen in a year against the safe haven currency Japanese yen and is holding close to the highest level in several months against other leading currencies as hopes rise for the US to post a faster economic recovery than other regions. At the time of writing, the US dollar index DXY is trading around 93.29.

Later today, President Joe Biden is set to lay out his plans on increasing investment in infrastructure to the tune of up to $4 trillion. This is likely to boost the market sentiment towards the US dollar further, after Biden’s recent assurances that 90% of adult Americans will be eligible to receive the COVID-19 vaccines by mid-April.

The US dollar index is set to post its best performance in nearly five years over the month of March, starting from around 90 and strengthening above 93 by the previous session. Fed officials and recent economic data releases have also helped the dollar climb higher against its major rivals.

Fed policymakers have expressed hopes that the US economy and employment could see sharp improvement by the summer 0f 2021, thanks to a strong vaccine rollout initiative. Meanwhile, US consumer confidence hit the highest level seen since the beginning of the coronavirus pandemic, driving further bullishness in the dollar.

Rising US Treasury yields lent additional support to the greenback, helping drive more bullish momentum in the reserve currency. The benchmark 10-year US Treasury yields rose as high at 1.776% during the previous session, the highest level seen since a year.