DOGE/USD closed at $0.450460 after placing a high of $0.567000 and a low of $0.450460. Dogecoin extended its losses and dropped for the third consecutive session on Monday after its booster-in-chief Elon Musk failed to generate any new momentum for the cryptocurrency. The altcoin faced pressure after Musk had a magnified audience but did not attempt to promote Dogecoin on the SNL platform. When the SNL crew asked Musk about the crypto asset, he admitted that it was a hustle, and this comment added further pressure on its price over the weekend.

On the flip side, the cryptocurrency that started out as a joke has now taken a SpaceX mission to the moon. The Geometric Energy Corporation announced that the DOGE-1 mission to the moon would be the first-ever commercial lunar payload in history paid entirely with DOGE. The mission is a collaboration between Geometric Space Corporation and SpaceX which will involve a launch of a 40kg CubeSat as a rideshare on a SpaceX Falco 9 lunar payload mission. The launch is expected to take place in early 2022..

The co-founder and CEO of the business analytics company MicroStrategy, Michael Saylor, believed that it was not wise to leave the trendy cryptocurrency Dogecoin to your grandchildren. In contrast, he outlined BTC’s potential and breached the significant differences between the primary cryptocurrency and the meme token. After these comments, Dogecoin added in its losses over the weekend. The U.S.-based cryptocurrency exchange Gemini recently announced that it would grant its customers the opportunity to earn interest in Dogecoin. The memecoin will provide up to 2.25% interest over the year. Another reason behind the declining prices of DOGE/USD was the come-back of the U.S. dollar on Monday. The U.S. Dollar Index that measures the greenback’s value against the basket of six major currencies rose to 90.34 level and weighed on DOGE/USD. 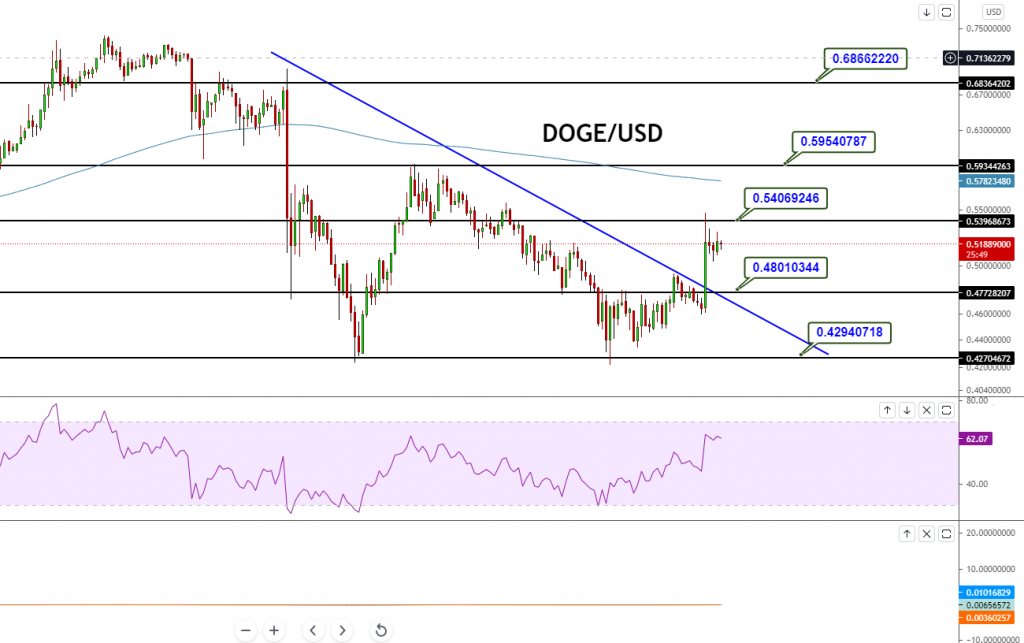 Support Resistance
0.411614 0.528154
0.372767 0.605847
0.295074 0.644694
Pivot Point: 0.489307
The DOGE/USD pair has violated a downward trendline resistance at 0.4965 level. On the higher side, it pair can trade further higher until the 0.5900 level. Since the release of Elon Musk’s Twitter pool: Do you want Tesla to accept Doge? The cryptocurrency is skyrocketing. Violation of 0.5900 level can lead the Dogecoin’s bullish momentum until 0.6900 level. On the lower side, the support continues to hold around 0.4270 level today. Bullish bias dominates. Good luck!
BUY DOGE/USD
Check out our free forex signals
Follow the top economic events on FX Leaders economic calendar
Trade better, discover more Forex Trading Strategies
Related Articles

Sideways Trading in Gold Continues - Brace for a Breakout!
14 hours ago 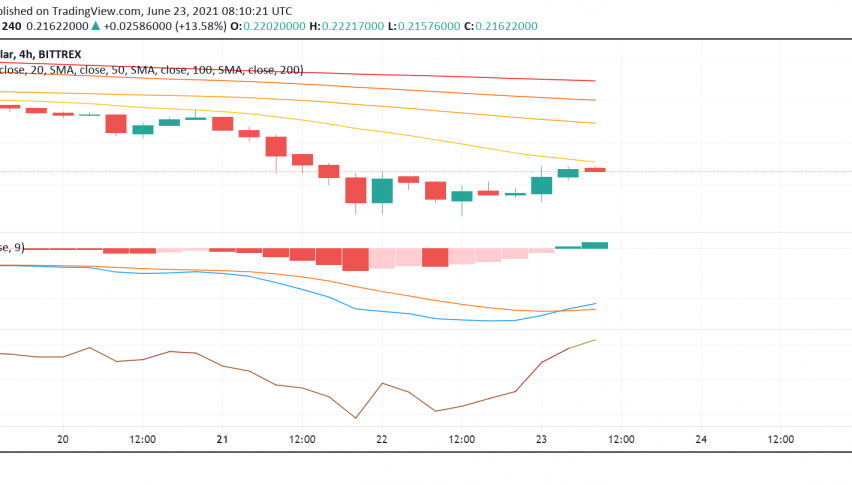 Dogecoin (DOGE) Edges Higher - is an Uptrend Building up?
15 hours ago