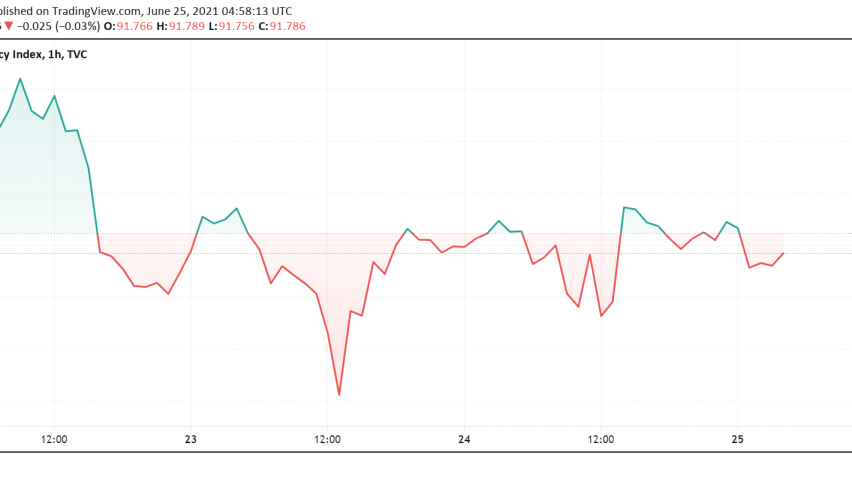 The US dollar rebounded towards the highest level seen in several months with investors shifting their focus back towards inflation data even as the GBP dipped after the BOE refused to hint at any dovish plans in its recent policy meeting. At the time of writing, the US dollar index DXY is trading around 91.78.

The bullish moves in the greenback were triggered last week after the FOMC statement revealed an increasing interest among policymakers towards hiking interest rates sooner than previously planned. Although the hawkish tones were downplayed by Fed chair Jerome Powell during his congressional testimony earlier this week, the US currency managed to hold on to its recent strength after a brief dip.

Later today, the US dollar could experience considerable volatility on the release of core PCE data. According to a recent Reuters poll, core personal consumption expenditures – a key gauge of inflation, is expected to rise by 3.4% YoY against the previous month’s reading of 3.1%.

The renewed bout of strength in the greenback is weighing on other major currencies, keeping them trading under pressure despite prospects of their respective central banks having a more hawkish outlook than that of the Fed. The EUR trades below the key $1.20 level while the JPY sits close to the lowest levels seen in 15 months. Meanwhile, commodity currencies AUD and NZD are also trading well below multi-month highs.

Forex Signals Brief for May 16: Risk Sentiment Tries to Make A Comeback
2 days ago

Forex Signals Brief for May 13: There's Still Panic in Cryptocurrencies
5 days ago