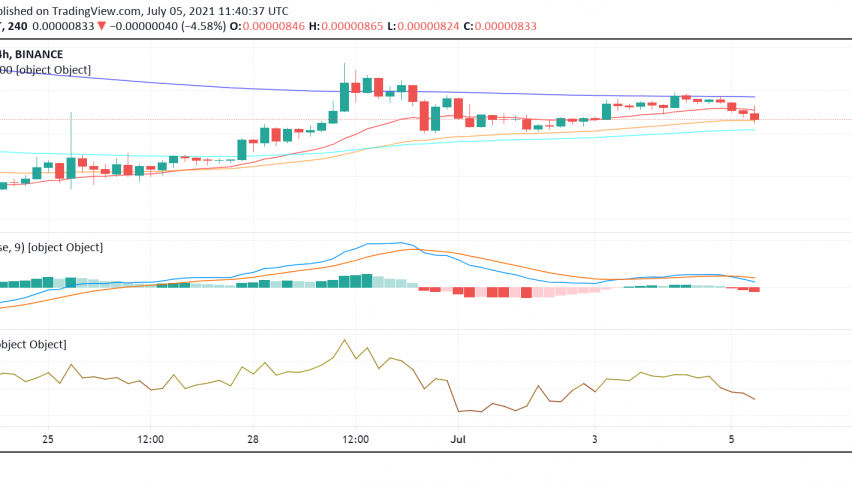 Shiba Inu (SHIB) is trading on a slightly bearish track into Monday, down by over 2% since the previous session, amid a cautious mood in the overall crypto market which is weighing on investor sentiment. At the time of writing, SHIB/USDT is trading around $0.0000083.

The rising popularity of the memecoin among the online community has led several analysts and observers to take closer notice of the Shiba Inu coin lately, just a few months after dismissing it as a joke. The digital asset has been gaining further attention lately not only on the back of increased interest in Dogecoin (DOGE) but also recent interest from Tesla CEO Elon Musk, which has convinced fans that it could soon become the next hot cryptocurrency for Musk.

Recently, a crypto analyst and influencer who goes under the pseudonym Coin Bureau shared his reasons for turning bullish about SHIB’s prospects via a video on his YouTube channel which has over 1.1 million subscribers. He talked about how Shiba Inu has more applications beyond being a method to transfer payments digitally, unlike Dogecoin.

The SHIB powered DEX ShibaSwap is currently under audit by CertiK ahead of its upcoming launch. The launch of the decentralized exchange is likely to drive interest and adoption of the coin higher soon, especially as it has a team of prominent developers working on it.

According to Coin Bureau, “Where Shiba Inu and Dogecoin differ are the connections they have to the crypto community. DOGE is really just a meme and nothing more… By contrast, SHIB is close to becoming a big player in Ethereum’s ecosystem by overcoming the shortcomings of Dogecoin. As community-driven as Shiba Inu is, there definitely seem to be some seriously prolific people behind the project.“

On the H4 chart of SHIB/USDT, we can see that most of the smaller moving averages as well as leading technical indicators MACD and momentum are exhibiting a bearish bias at the moment. However, the presence of buyers on the horizon cannot be dismissed, especially with the larger timeframe MAs flashing buying signals.

For now, Shiba Insu’s price has slid below the pivot point at $0.0000086, so it would make sense to keep a close eye on the immediate support which sits at $0.0000076. However, a reversal of the market sentiment could propel more buying interest and send the price back above the pivot and towards resistance at $0.0000097, before it can break past the key $0.000010 level.

Cryptocurrencies Stay Bullish As Bitcoin Heads for $25,000, Ahead of FED Meeting
5 days ago

Fantastic article. Thank you for trying to make others understand that with the Shibaswap eco system it is completely different all together. Bone Token will be our governed token for the SHIB family. First to employ a 3 token system for all. SHIBA INU TOKEN, BONE TOKEN and LEASH TOKEN! 🙂 it will be huge!!!

What is use of shibaswap

The point of shiba swap is that people will start to lock they tokens for rewards. The more tokens that get locked in the pool the less tokens In circulation which in return will raise the price of the token. In the first 12 hours 600 trillion token were locked up in the pool that’s roughly 5 percent of the total supply. Day by day more will get locked up. Hold onto your tokens this is going to be big. Don’t panic. We’re going to see great great great gains. Hold.