Is Enjin Becoming the Metaverse of Crypto? Should you Buy ENJ/USD? - Forex News by FX Leaders 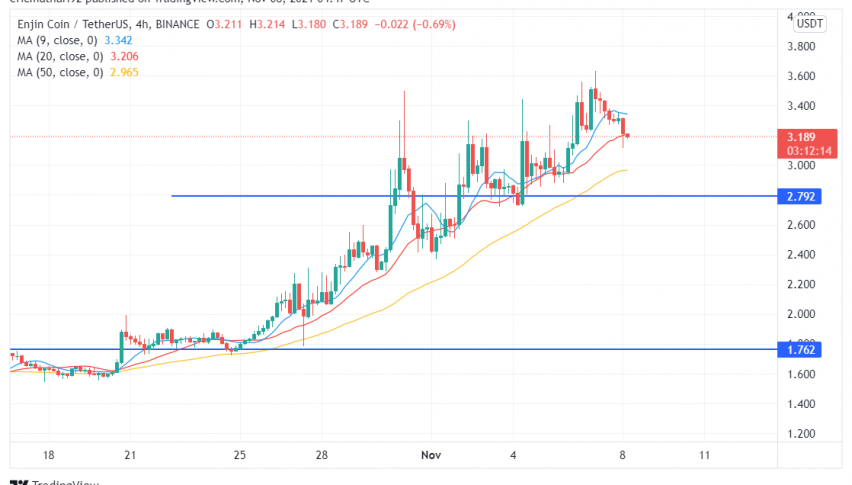 Is Enjin Becoming the Metaverse of Crypto? Should you Buy ENJ/USD?

Not much is spoken about the little-known coin ENJ/USD. For a coin that ranks at position 63 in the crypto industry by market cap, it makes sense that most attention has been on the top tokens or the trending memecoins.

Nonetheless, ENJ/USD has been on a superior bullish run relative to similarly ranked coinsand the broader cryptocurrency industry. At the time of writing, it had gained 31.75% in the last week despite being down 5.57% in the last 24 hours. Still, ENJ/USD traded at its highest in the month, slightly above 3.6 on November 7. The price is more than double from when it was trading at only 1.7 on October 20.

ENJ/USD has received bullish sentiment on the growing popularity of decentralized finance. According to its website, Enjin claims to offer end-to-end solutions for launching the NFT project. Enjin has tried to live up to its hype which is helping the platform grow and attract attention to its crypto coin. On November 4, it announced a $100 million Efinity Metaverse Fund to support its ecosystem partners and bring to reality a decentralized Metaverse.

Well, we already know that Metaverse is becoming a new craze, with social media chat rooms, including Reddit exploding some days ago after Facebook announced it has rebranded to Meta in line with its new ambitions. Other companies, including Microsoft, have reportedly considered making Metaverse a reality.

Enjin has seized the opportunity to become a crypto future by making inroads in Metaverse, with the announced fund only a step in the beginning. Following the announcement of the Metaverse Fund, ENJ/USD jumped from a low of around 2.7 to a high above 3.4, showing that investors are already reading positive vibes from the development. In the long-term, investors will turn their attention to how Enjin remains relevant in the Metaverse endeavors.

Looking at the 4-hour chart, we can see that ENJ/USD has been on a strong bullish run, making higher highs and higher lows. The crypto token has been making 50% retracements from recent highs, which reinforces a bullish view.

Besides making higher highs and higher lows, ENJ/USD has displaced the clearest sign of a bullish run in the last few days. It has broken above the 3.15 level, which was holding it back.  It traded at a high of 3.6 over the weekend, with the token now above the consolidation area between 3.15 and 2.79.

With the technical pointers matching the Enjin fundamentals, we consider ENJ/USD to be a strong candidate for a buy in the medium and long-term. Already, the crypto token is trading above the 50 moving average (yellow), reinforcing a long-term rise in price.

However, we can see that ENJ/USD is trading below the 9 MA (blue) and at the same level as the 20 MA (red). To short-term traders, this means we could see a temporary drop in prices before we pick up. I still advise against shorting ENJ/USD as it is displacing bullish signs and could move above all moving averages within a blink of an eye.

If the current short-term weakness on ENJ/USD continues, we should aim to buy at the area around 3.15 or lower at the established support of 2.79.  Our target areas for buy trades will be around 3.6 or the previous all-time high of 3.9, or potentially, new ATHs. Good luck!