Palladium is a hard, silver-white metal that is now the most valuable of the four major precious metals. An acute shortage has made it expensive in the market. Palladium can be used in pollution control devices for cars and trucks. The price of this precious metal doubled in little more than a year, making it more expensive than gold.
It is a lustrous white material, which fits into the group of six platinum metals. About 85% of palladium ends up in the exhaust systems of cars, where it helps turn toxic pollutants into less harmful carbon dioxide and water vapor. Palladium is also used in electronics, dentistry and jewelry. It is primarily mined in Russia and South Africa.
Palladium is the least known of the four major precious metals, which include gold, silver and platinum, but it is the most expensive of these metals, due to its scarcity. It has extensive industrial uses, like silver and like other precious metals, and it can also be used as an inflation hedge. 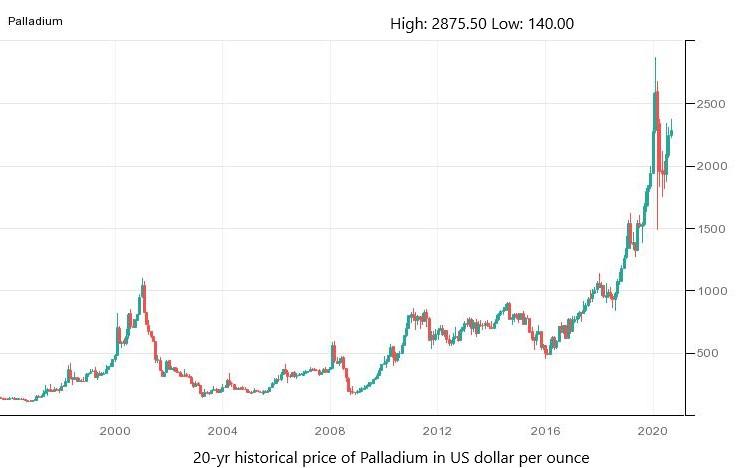 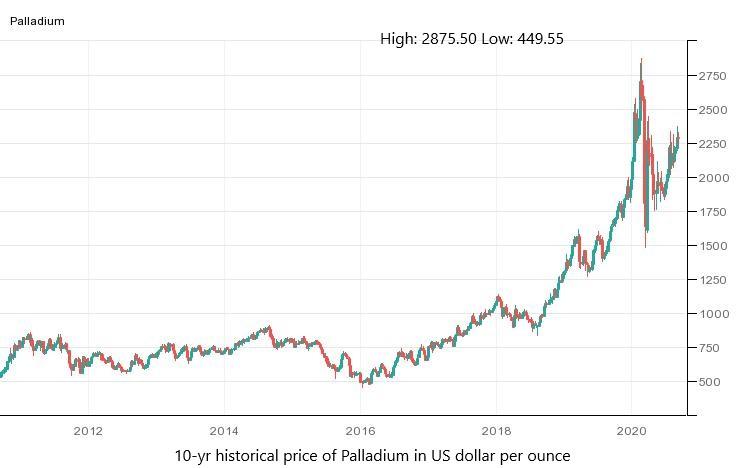 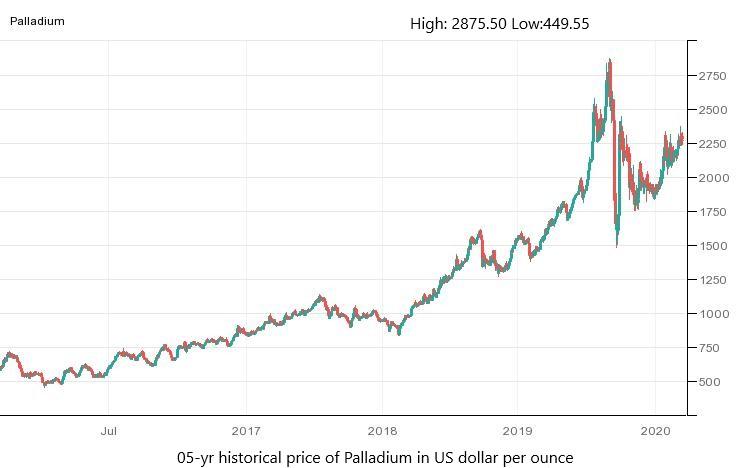 Why Look at Historic Palladium Prices?
There are manifold factors involved in the determination of a bullish bias in palladium. Let’s explore them one by one, in order to forecast the Palladium prices.

Auto Demand:
Palladium is extensively used as an essential ingredient in catalytic converters, in other words, it is used in the exhaust systems of cars, to control pollution. Automotive sales in China and the United States affect palladium prices. The car and truck manufacturers in China and the United States use palladium, and an increase in automobile sales in the world’s two largest economies can indicate growth in palladium prices.

The demand for Palladium has grown in recent years, as the governments, especially in China and Europe, have tightened regulations, in an effort to crack down on pollution from vehicles. This has forced automobile manufacturers to increase the amount of precious metals used in exhaust systems.

In Europe, consumers have been buying fewer diesel cars, that use platinum, and are using gasoline-powered vehicles, that use palladium, instead. The average 14% increase in palladium-loading in gasoline-powered cars pushed the palladium prices to a record high of 9.7 million ounces last year, despite lower auto-production in most regional car-markets. In 2019 and 2020, palladium prices rose by almost 80%, to a record high of more than $ 2,800 per ounce.

The latest legislation from China and Europe, which forces automobile manufacturers to meet strict emissions standards by increasing the use of palladium, has raised expectations that the demand will surge above 10 million ounces, despite the slow global economic growth and falling car sales in key markets, including the US, China and Europe.

The Decreasing Supply:
Any commodity that has a rising demand or a decreasing supply is an obvious choice for investment, because, in both cases, the prices will increase. There are only two countries that produce palladium, namely Russia and South Africa. Russia is the largest producer of palladium, and the country has not been open about the extent of its palladium reserves. However, strong evidence suggests that the production of palladium in Russia is decreasing. South Africa, which is the second-largest palladium-producing country has been plagued by labor strikes, which have disrupted the output there. The decreased production from both countries has forced the palladium prices even higher than the gold prices.

An Inflation Hedge:
Palladium is priced in US dollars, which means that it also has an inverse relationship with the US dollar, like all other commodities. When the dollar rises, the metal suffers, because the stronger dollar can buy more ounces of the metal and vice versa. Mostly, gold is seen as the ideal hedge for this scenario, which is also known as inflation. Palladium is also used as an inflation hedge when the US dollar is weak.
Recently, when the US dollar was weak, due to multiple factors, including lower interest rates by the Fed, rising numbers of coronavirus cases in the US and a delayed new round of US stimulus bill talks, palladium gained traction in the market and started to rise.

Coronavirus Pandemic:
The prices of palladium tumbled by more than 10% when news of the spread of coronavirus in the United States, China, Europe and the rest of the world broke. The prices fell because of the economic slow-down and the shut-down of the automobile industry and other sectors that use palladium. However, since then, gold has regained the ground it lost, while palladium has dropped to $ 2,500 per ounce, from $ 2,875 per ounce in February.
The automobile sector and factory shut-down, along with the disruption of the supply chain, drove the prices towards the downside.