WTI Crude Oil Price Forecast for 2020: What to Expect from Crude Oil In Q4

The [[WTI]] Oil prices are slightly changed, as they continue to trade within a broad trading range, on the 40.50 to 4.50 levels. The rising demand encouraged OPEC+ to commence reversing the production cuts that were announced earlier this year. The cartel of 23 oil-producing nations, headed by Saudi Arabia and Russia, confirmed that they would decrease the size of their production cuts to 7.7 million barrels a day, from the beginning of August, which would add almost 2 million barrels to daily production levels. In addition to GDP figures for the EU, the US, and Hong Kong. WTI Crude was steady at 41.25 while Brent held at 43.26.

The black crack is on the back of bullish correction/retracement as it has closed two positive months back-to-back, adding a gain of more than 170% in prices. Let’s take a look at the WTI Crude Oil price forecast.

The WTI Crude Oil prices declined considerably in 2020, on the back of the COVID-19 Pandemic and the 2020 Russia–Saudi Arabia oil price war. On April 20, WTI Crude Futures Contracts dropped below $ 0 for the first time in history.

The WTI Crude Oil prices dropped significantly in 2020, due to the Covid-19 pandemic, causing a massive stock market drop. As per the IHS Market report, the “Covid-19 demand shock” represented a larger contraction than that faced during the Great Recession in the late 2000s and early 2010s. As a result, the oil demand dropped to 4.5m million barrels a day below forecasts, as tensions escalated between OPEC members. During the OPEC meeting in Vienna (March 6), major oil producers were unable to come to any agreement on reduced oil production, in response to the global COVID-19 pandemic. Consequently, the spot price of WTI Benchmark Crude Oil on the NYM on March 6, 2020, dropped to USD 42.10 per barrel.

Thereafter, the oil price war began on March 8, and oil prices, which declined by 30%, represented the most significant one-time drop since the 1991 Gulf War. One thing that we need to understand is that very few energy companies were able to produce oil when the oil price was at about $ 30 a barrel. Saudi Arabia, Iran and Iraq had the lowest production costs in 2016, while the United Kingdom, Brazil, Nigeria, Venezuela and Canada had the highest.

After this, Saudi Arabia and Russia agreed to oil production cuts on April 9. As per the Reuters reports that “If Saudi Arabia failed to rein in output, US senators would ask the White House to impose sanctions on Riyadh, pull US troops out of the desert kingdom and institute import tariffs on Saudi oil.” On April 20, the price for future delivery of US crude in May had become negative, mainly due to the excessive demand for storage of the large volumes of surplus production. This is the first time that this has occurred since the New York Mercantile Exchange began trading in 1983.

The collapsing oil prices could also be associated with the Russia–Saudi Arabia oil price war of 2020. This was an economic war that started in March 2020, as Saudi Arabia responded to Russia’s refusal to agree to reduce its oil production, in order to keep oil prices at a moderate level. As a result of this conflict, the oil prices dropped over the spring of 2020.

In the same month, Saudi Arabia launched a price war with Russia, facilitating a 65% quarterly fall in the oil price. During the first week of March, crude oil dropped by 26%, and Brent oil dropped by 24%. The main reason behind the price war could be attributed to the break-up in the dialogue between the Organization of the Petroleum Exporting Countries (OPEC) and Russia, over proposed oil-production cuts during the COVID-19 slump. Russia stepped back from the agreement, causing the collapse of the OPEC+ agreement. However, the price war is one of the major causes and effects of the ongoing global stock-market crash that is currently causing headaches for some investors.

Apart from all quantitative catalysts, on March 8, Saudi Arabia declared unexpected price cuts of $ 6 to $ 8 per barrel, to customers in Europe, Asia and the United States, and this exerted significant downside pressure on the oil prices. The West Texas Intermediate, a form of crude oil applied as a benchmark in oil pricing, fell by 20%. After one day, the stock markets worldwide reported major losses, in recognition of a combination of the price war and fears over the coronavirus pandemic. However, the effects of this announcement were felt outside of oil prices and stock markets as well. As a result, the Russian ruble dropped 7%, to a 4-year low against the US dollar.

On the other hand, the oil price declines were also bolstered by US President Donald Trump’s warnings that he would withdraw US military support, if OPEC and its allies did not cut oil production, after significant internal pressure, called Saudi Arabian crown prince and de facto ruler Mohammed bin Salman.

4: Surge in the US Dollar – Correlation Plays

From the start of the COVID-19 Pandemic, the US dollar has been treated as a safe-haven asset. Investors felt safe investing in the US dollar, as China was reporting a massive number of COVID-19 cases, along with several other countries around the world. As a result, the US dollar has been stable for the duration of the pandemic, and this has also kept the oil prices lower, as the oil price is inversely related to the price of the US dollar. The surge in the dollar exchange rate made the dollar-denominated crude oil expensive for foreign countries, and they were forced to cut their unnecessary demands.

WTI Crude Oil can be very volatile and fluctuate drastically, particularly over a period of five years. For instance, Brent Crude shifted from as high as USD 125 a barrel in 2012 to as low as USD 30 per barrel in January 2016. Therefore, despite the markets being turbulent through 2019, and into 2020, there could still be a very unusual outcome in the price by 2025.

Nevertheless, the same conclusive factors are still likely to be playing their role when it comes to deciding the crude oil prices. The fundamental factors that define the crude oil demand and supply are likely to stay unchanged for the next five years, but their effects will vary considerably. The following factors should always be considered when predicting crude oil prices:

As per the EIA forecast, by 2025, the average price of a barrel of Brent Crude Oil will rise to $ 79/b. By 2030, world demand will push crude oil prices to $ 98/b. By 2040, prices will be at $ 146/b. The reasons for this could be associated with the EIA expectations that the demand for petroleum will flatten out as utilities rely more on natural gas and renewable energy. This is also assuming that the economy grows around 2% annually on average, while energy consumption increases by 0.4% a year. However, in my opinion, over the next few years, the world is going to suffer from the post-coronavirus recession. The trade war between China and the US could have a long-term impact on China’s crude oil consumption, amid a drop in exports to the US sector. A drop in exports could result in a drop in production, and ultimately less consumption and a lower demand for crude oil, from the world’s biggest oil consumer. Let’s check out the technical side of the market, especially for the WTI Crude Oil prices.

Technical Analysis – Can we Expect a Bullish Correction in WTI Crude Oil?

WTI Crude Oil is trading with a bullish bias, at $ 41.15 . Considering the technical side, crude oil price forecast suggests that the WTI Crude Oil price is heading north, to complete a 61.8% Fibonacci retracement, until the $ 44.89 level. The previous two monthly candles were solidly bullish and there is a strong probability that the next candle for the month of July will also be bullish. If this happens, it will become “Three White Soldiers”, which confirms strong odds of a bullish trend in oil, which will help to support oil prices to the $ 44.89 level. A bullish breakout at this level could also extend oil prices towards a psychological level of $ 50, with the resistance extended by 50 periods EMA.

With regard to the yearly forecast, the Three White Soldiers pattern suggests a strong bullish bias among traders, and at the same time, the drop in the Fed interest rate could also underpin oil prices, leading them towards $ 53.20 and $ 60. 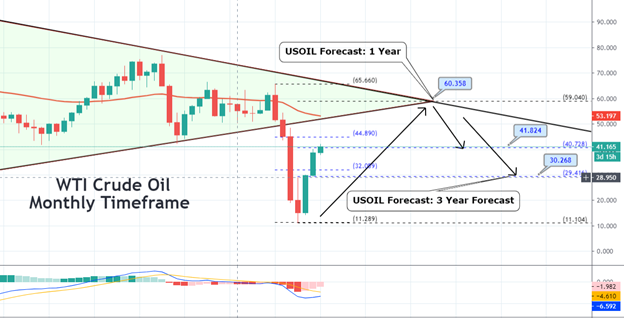 WTI crude oil forecast for 2023 – We can expect crude oil prices to drop below the $ 60 resistance level, in order to complete a 38.2% Fibonacci retracement to $ 40.72. Below this, the market is likely to go after a 61.8% Fibonacci retracement level of 29.40. In any case, if the fundamentals continue to support a bullish trend, the bullish breakout at the $ 60 level could open up further room for buying, until $ 74.5 and $ 107. Let’s brace for the second half of the year and keep a closer eye on the fundamental side of the market.