Soybeans, which are a commodity, like corn and wheat, were very volatile for about a decade, from 2003 until 2013. There were some massive surges, followed by major declines, for a number of reasons that we will explain below, as there were times in 2012 when US soybean futures reached the $ 1780s. The price action in soybean futures has been much calmer in the last decade, with a bias to the downside, as has been the case with most commodities.

The US-China trade war hasn’t helped the situation, but since June we have seen a surge in soybean prices, with soybean futures: ZS gaining around $ 350 and breaking above moving averages, which paints a really bullish picture for the near future, although there’s another major level to be breached at $ 1,200, if the bullish momentum is to continue.

Recent Changes in the Soybean Price

Supply and demand are the main factors that determine whether a commodity will appreciate or depreciate. The supply side is decided by production, mainly in the US and Brazil, and to a lesser degree in Argentina, China and India. Most of these countries are under the influence of El Nino/El Nina, so the weather conditions have a major impact on production and supply. The demand is usually driven by consumption in Chinese animal husbandry, as soya is used as both animal feed and biofuels.

Soybean Price Prediction for the Next 5 Years

Similar to corn and wheat, soybean production is dependent on weather. But the main producing countries are on the East Coast of the Americas, such as the US, Brazil and Argentina, making them subject to the effects of La Nina,which is similar to El Nino on the Pacific West Coast. This affects crop production. The predictions are that the Americas will have a cold dry season, due to these weather phenomena, which is one of the reasons for the soybean price turning really bullish in the last few months. But this is a seasonal factor rather than a long-lasting one.

The demand from China is another major factor, since meat production has surged in China in the past 3 decades and it will continue to do so, as the country develops further. The Chinese economy fell into recession in early 2020, due to the coronavirus, but it has been recuperating quite well since late Q2, meaning that the meat and soybean consumption has increased, leading to higher soybean prices since June. The pace of economic recovery is increasing, so the demand will be high from China.

Soybean is also used for biofuels, just like corn. This means that when the crude oil price increases, the demand for alternative fuels increases as well, as does the demand for soybeans, which leads to higher prices again. The increase in crude oil prices has pulled corn and soybean prices higher, although the new round of lock-downs in the fall might have a negative impact on the global economy and the fuel demand, but that won’t last forever, I hope. The US Dollar is also a factor, since soybeans are traded in USD, meaning that when the USD weakens, the soybean price increases. The USD has been quite weak since March, which is another reason for agricultural products, like soybeans, being bullish.

Technical Analysis – Will the Recent Surge End at the 50 SMA for Soybean Prices?

Judging from the monthly chart, US Soybean future prices traded sideways in the 1990s. This trend continued until 2006, but the bias was to the upside, as can be seen from the jumps in 1997 and 2003-04. But the price came back down eventually, since the reasons for the jumps didn’t have any long-lasting effects. But the real surge started in 2006, and Soybean prices increased to $ 1,660s. But the reversal back down came right before the global financial crisis in 2008, signaling that something big was coming. The decline ended at the moving average on the monthly chart, and the bullish momentum picked up again, sending US Soybean futures :ZS to $ 1,790 by 2012. 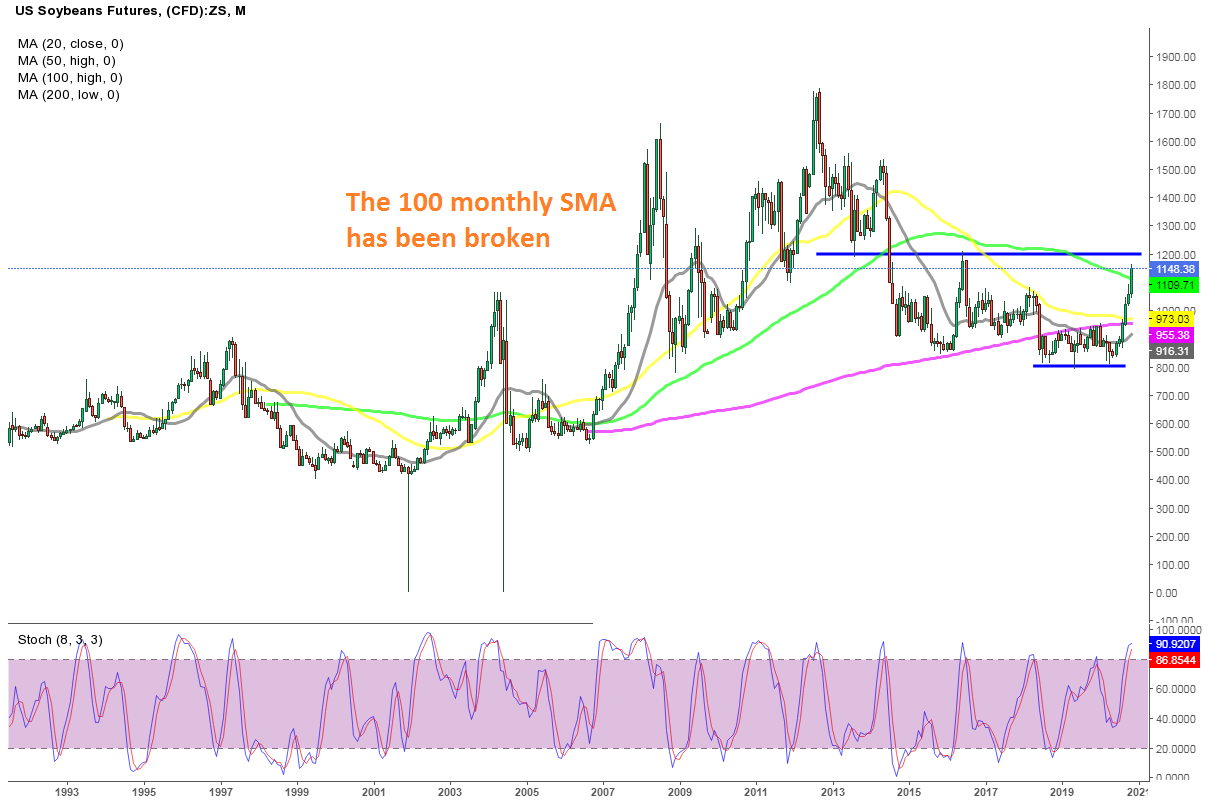 All moving averages have been broken now

The bullish times have been over for commodities since 2011-12, and we saw the price reversing in 2012. But the major decline came in 2014, as the USD turned bullish that year. But the 200 SMA (purple) held as support for soybean prices, at around $ 850, and the price bounced off that moving average on the monthly chart. The bounce stretched until $ 1,200 and stayed there, remaining bearish from then until Q2 of 2020. The 50 SMA (yellow) provided resistance in 2018, and throughout 2019 the 200 SMA acted as resistance. But, in H2 of 2020 the price turned bullish for the reasons mentioned above, and it has broken above the moving averages, although it is now facing the previous resistance at $ 1,200. 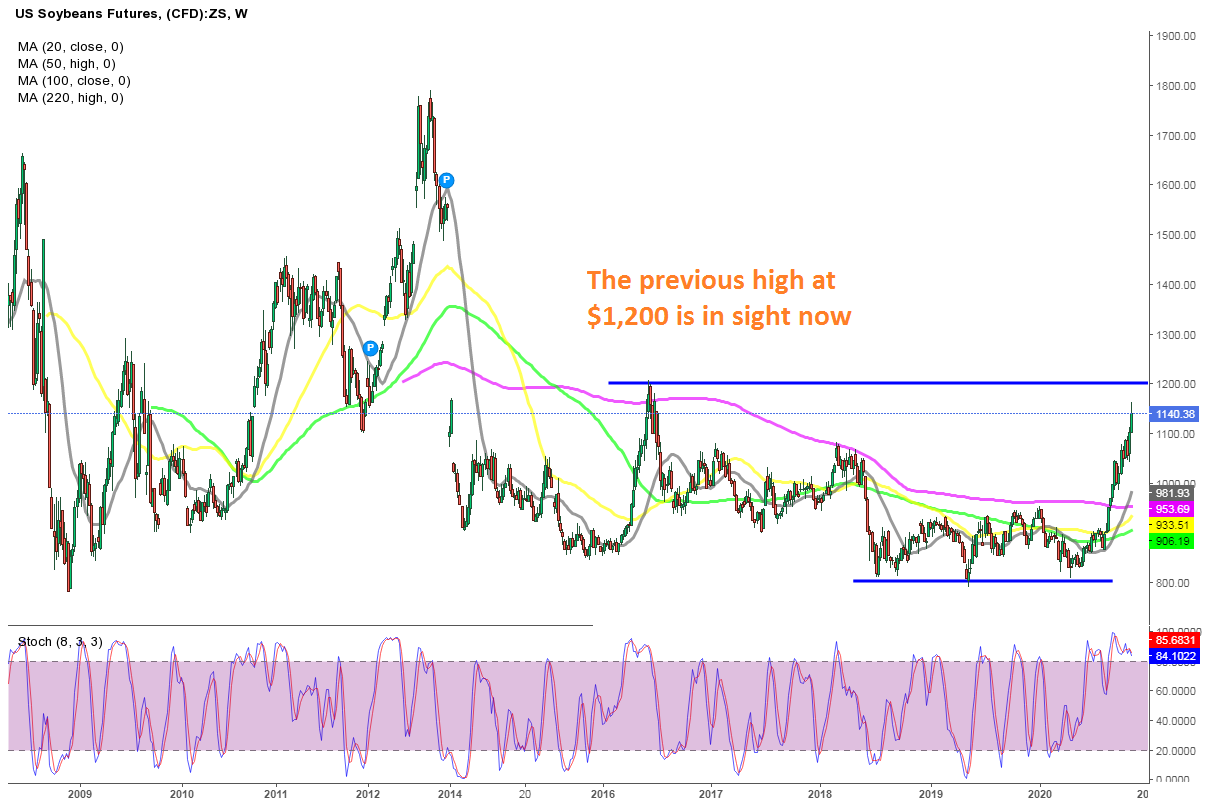 The bullish move is getting momentum

On the weekly chart, the 200 SMA has been keeping the pressure down for US soybean futures, providing resistance during pullbacks higher since 2018. At the bottom, a support area has formed around $ 800, where the price has held several times. However, since June, the price has surged, breaking all moving averages, and it is heading towards $ 1,200 at the moment. If soybean futures break that level, the bullish momentum will continue further. Otherwise, we might see a pullback to the 200 SMA.