Litecoin began trading at around $0.3 in 2011, after listing in different exchanges in 2011. LTC remained subdued until 2013, when it put on a strong bullish momentum that took it to a high of around $44. The bullish momentum was short-lived, and the price crashed and consolidated between $2 and $4, following the collapse of the Mt.Gox exchange, after a major hack. In March 2017, Litecoin skyrocketed from $3 to a high of about $350 in December the same year, driven by a market-wide bull run. In May 2021, LTC hit an all-time high of around $410 but could not sustain the momentum and dropped to $110 by July.

Litecoin began trading at $195 at the beginning of November, and rose to $294 by the 10th of the same month, bringing in returns of over 150%. LTC/USD remained range-bound, trading between $243 and $279 from November 11 to 15, before the bears took control. LTC/USD then took a tumble to a low of $201in a crypto-wide rout on November 19. The token traded below $230 until November 25, when it plunged to $189 on a bearish market sentiment that was attributed to news of a new Covid-19 variant.

The Litecoin price has been affected by the dynamic regulations in various jurisdictions in the recent past. The crackdown of the privately-owned cryptocurrencies in China affected mining activities and the overall adoption of cryptos. The post-pandemic economic recovery, on the other hand, is driving a bullish momentum within the sector. Overall, investors have regarded the crypto assets as a hedge against inflation, because unlike with fiat currencies, no single central authority can increase the supply. As the inflation rate remains high and more people seek a safe haven in digital assets, Litecoin could benefit and surge even higher.

Litecoin will remain bullish in the long run, as more countries legalize the use of cryptocurrencies. Although LTC/USD is trading below its all-time high, we expect it to smash past the level during the first half of 2022, due to fresh bullish moves, as adoption continues to gather pace. We expect the price to reach $600 by the end of 2022, and grow to $800 in the next two years. Litecoin could peak at around $1,000 in the next three years, as the industry goes mainstream. Factors that could slow down growth include the increasing competition from other cryptocurrencies. Tokens like Solana have higher transaction speeds and lower costs, compared to Litecoin, and this could curtail its growth. Concerns about a new Covid-19 variant could also be a factor that could create market fear and cause a plunge, not only in Litecoin, but in other cryptocurrencies as well. Nonetheless, Covid-19 concerns could trigger bullish moves in Litecoin, if investors perceive cryptocurrencies as a store of value, in the wake of high inflation, due to government stimulus programs.

Litecoin, which was created by Charlie Lee, a former software engineer at Google. It  is a Peer-to-Peer virtual currency that was introduced in 2011. The network is a fully decentralized open-source payment protocol. Litecoin was created as a lighter version of -Bitcoin, in terms of transaction speeds and costs. The platform uses the proof-of-work consensus algorithm to validate transactions and leverages the strength of its mining to secure the network and prevent the double-spending problem. In 2020, Litecoin announced a shift to the Proof-of-Stake consensus mechanism, in order to scale transaction speeds.

Litecoin is ranked as the fifteenth largest crypto, with a market cap of $13.6 billion and about $2.6 billion in daily transaction volumes. LTC is currently trading at $197.18. There are 69,061,119.82 circulating LTC tokens, out of a maximum supply of 84,000,000. The blockchain uses the block reward-halving model to slow down the mining of new coins over time, in adherence to the scarce tokenomics model.

Litecoin was created a few years after Bitcoin was launched. It was aimed at supplementing it rather than competing with it. The network has a block generation speed of 2.5 minutes, compared to Bitcoin’s ten. Litecoin network uses Scrypt, an alternative form of the PoW algorithm, compared to the SHA-256 used in Bitcoin. Scrypt mining uses memory more than computing power.

Factors Promoting the Growth of Litecoin

The availability of Litecoin tokens in the market affects their price, due to the imbalance in supply and demand. The future price could largely depend on the supply. With the Litecoin halving mechanism, which reduces mining rewards for miners every four years, Litecoin could maintain its purchasing power.

The overall crypto market sentiment is another factor affecting Litecoin. As the public becomes receptive to cryptocurrencies in the future, LTC could benefit more. An increase in the market capitalization could also increase the uptake, but a reduction could trigger liquidations.

Litecoin is comparable to Bitcoin in most aspects, and was created to enhance the network efficiency. To some extent, the price movements of Bitcoin would largely affect that of Litecoin, since investors categorize them as similar. With Bitcoin maintaining its crown as the world’s largest cryptocurrency and remaining on a bullish trend, Litecoin could enjoy similar moves.

The growing adoption of Litecoin among merchants is a factor that drives the adoption, and the price of Litecoin. Currently, over 2,500 stores accept LTC as a form of payment, due to lower transaction costs and faster speed compared to Bitcoin. AMC Entertainment and Regal Cinemas are the latest adopters of the token as a form of payment in their movie theatres.

Bitcoin and Ethereum are currently trading above $50,000 and $4,000, respectively, after surging from low levels at their introduction. Investors are looking for altcoins that can replicate similar gains. The partnerships and the Litecoin community are other factors driving the surge in the Litecoin price.

Litecoin has implemented various upgrades in the recent past, initially meant for deployment in Bitcoin. The SegWit upgrade is aimed at improving transaction throughput. The upgrade reduces transaction sizes and increases the block size limit as a form of improving scalability. The SegWit upgrade reduces the confirmation time by modifying the verification mechanism to exclude signatures, which forms about 60% of the transaction.

Litecoin has also implemented the Lightning Network, a layer two solution aimed at solving the scalability problem. The solution takes transactions, which are normally completed on the blockchain, off-chain. Litecoin has also unveiled the development of the MimbleWimble privacy protocol to encrypt transaction information. As the network grows, we expect more upgrades that could enhance the efficiency of the platform.

LTC/USD Monthly Chart Points to a Steady Support at $126.42 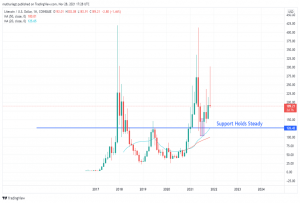 From the monthly chart outlook, LTC/USD seems to have found long-term support at $126. This is the level that prices were resisted between June 2018 up to the end of 2020 before breaking higher at the beginning of this year. Breaking above the 126-level propelled LTC/USD to new highs of about 412 before coming down again to test the support. A bullish pin bar can be observed towering above the support, which pushed LTC/USD to a high above $300. Also, both the 50 and 20 moving averages support LTC/USD on the monthly chart. Currently, LTC/USD is retreating again, and we consider $126 as the level to watch, should prices retreat further down from the current level. 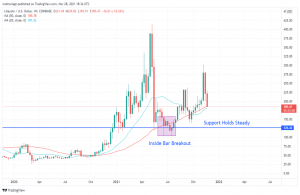 On the weekly chart above, LTC/USD met resistance at around $300. The resistance happens after a bullish run following a breakout from several insider bars at the 126 support. The token is now retreating, with the drop connected to the broader bearish sentiment in the crypto industry, due to new virus variant concerns. Nonetheless, $126 support remains steady, with a drop likely to that level. Still, LTC/USD is trading above the 20, 50, and 100 moving averages. With the 20 and 50 MAs close to or at the current price, we could see a quick reversal of LTC/USD to the upside. LTC/USD could still break below the moving averages, with the next target at $126. Clearly, $126 is becoming an important price action point for LTC/USD, as it is also shown to shape the direction of the trend on the weekly chart. 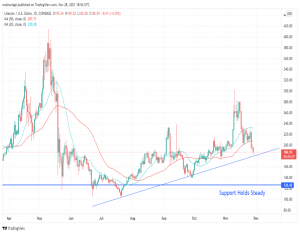 On the daily time frame, moving averages turn into resistance. However, they only became resistance after supporting prices for about two months, meaning that the bullish momentum remains in place. Besides, LTC/USD remains on an upward trendline, and is yet to break below it. With the daily time frame giving the most imminent short and medium-term trading situation on LTC/USD, potential exists for prices to consolidate, while remaining on the ascending trendline, allowing the moving averages to join the support. If prices break below this ascending trendline, we need to wait to test the $126 level. The support still holds on the daily chart, with a break below it on July 21, correcting quickly to the upside.

Eric Nkando // Financial Trader and Technical Analyst
Eric Nkando is a professional forex trader and financial analyst from Nairobi, Kenya. He has 3 years trading experience, with interests in Forex, cryptocurrencies, and commodities. He is a CPA(K) holder and a B.com degree (Finance) graduate. Eric’s market analysis and coverage have featured on leading financial websites including Wikifx and Seeking Alpha
11 Mo
0 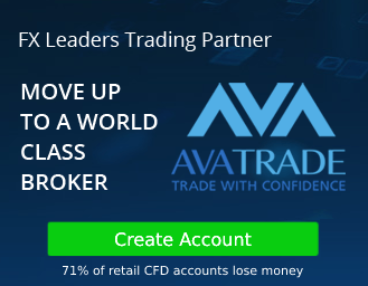