During the last year, the USD/CAD pair attempted to resume its long-term bullish trend in the first quarter of the year that it almost acquired with the help of the coronavirus pandemic breakout that pushed the US dollar higher due to its safe-haven status. However, the pair then turned its movements in an extremely bearish trend after countries started introducing lockdown restrictions to curb the coronavirus crisis’s effects. These lockdowns resulted in a massive decline in WTI crude oil prices due to reduced demand during halted economic activities worldwide.

Since April 2020, the pair has been consistently dropping, indicating a long-term bearish pressure on the currency pair. The decline reduced in September when the lockdown restrictions started to ease a little. However, it failed to pull back the pair and revive the bullish sentiment, and the pair continued falling. In 2021, the pair saw a little rebound with small gains in January as it started the year on a positive note amid the strength of the US dollar after Joe Biden officially took over his position as a President of the US.

Still, the currency pair continued its bearish trend in the next months of 2021 despite the US dollar strength. The declining prices of the USD/CAD pair in recent months could be attributed to the Loonie’s strength driven by WTI crude oil’s rising prices after the rebound in demand for energy sources.

USD/CAD Price Prediction for the Next 5 Years

The start of 2021 has been slow due to the rise in the number of coronavirus cases after the New Year and Christmas Holidays and the subsequent restrictions around the world that have kept the economic recovery in check. However, the prospects of economic momentum in the second half of this year have increased, especially in advanced economies like the US and Canada, due to widespread vaccine distribution combined with the additional policy support. Despite the continued uncertainty, the global growth rate projection has improved for this year to 6.0% from the previous 5.5%, and for 2022, it has improved to 4.8% from the previous projection of 4.4%.

The significant surge in fiscal support and the massive vaccine rollout have upgraded the US economy. The US’s GDP projection has also been expanded to 5.7% from the previous 4.1%, with the $1.9 trillion stimulus package passed into law. It has also improved the unemployment rate projection that has reached 3.8% for 2022. Keeping in view the mentioned projections, the US dollar is expected to improve in upcoming years and positively impact the USD/CAD pair.

While on the Canadian front, the economy has shown resilience against the renewed restrictions and second wave of the pandemic. The country’s GDP advanced to 9.6% in the final quarter of 2020 against the expectations of 7.5% despite the tougher measures around the provinces to fight the spread of coronavirus. However, it can still not be said that Canada’s economic growth has been resistant to the impact of second-wave restrictions in the country. As Canada’s economic projection looks better than that of the United States, it means the Canadian dollar is projected to advance higher than the US dollar and weigh on the USD/CAD pair in coming years.

USD/CAD Forecasts by the National Bank of Canada

According to the National Bank of Canada, the estimated price of the currency pair USD/CAD pair for the first quarter of 2021 will be 1.28. For the second quarter, the bank has predicted the prices to decrease and reach 1.25. The bank has projected a bearish trend for the currency pair throughout 2021 as the prices are expected to drop to 1.23 by the third quarter of 2021. At the end of this year, the bank sees USD/CAD pair prices near 1.20 levels.

US Vaccine Rollout – The vaccine rollout in the United States has improved the country’s economic projections. The US’s most vulnerable population expects to receive at least one dose of the vaccine shot by the second quarter. The country is on track to hit this target, which would help decelerate hospitalizations and clear the path to a sustainable lifting of restrictions. Almost 19% of the country’s population has already received one dose of the vaccine, administering over 2M doses per day. If the US vaccine rollout remains in line with the projection, then the US dollar will see a surge and support the currency pair USD/CAD in the coming weeks.

US Federal Reserve – The recent development in the United States’ fiscal policy with the passing of the American Rescue Act of worth $1.9 trillion into law has made a large shift in its outlook. It has even expanded the real GDP projection for 2021 to 5.7% from the previous 4.1%. However, this large fiscal stimulus when the US and the rest of the world were reporting better-than-expected economic data has increased the expectations of a rise in the interest rates. Fed Chair Jerome Powell has repeatedly said that the Fed will not raise interest rates until inflation and employment goals are met. And to reach its pre-pandemic levels, the government will have to add about 9 million more jobs as its employment rate currently remains at 57%, and the pre-pandemic level was 61%.

Given these circumstances, it seems like the central bank will keep the US monetary policy accommodative for many quarters. The USD depreciation will resume in the coming months, adding pressure on the currency pair USD/CAD.

Canada Vaccine Rollout – Supply constraints in Canada’s COVID-19 vaccination could continue for the next few months and could keep the Canadian dollar under pressure. However, in the second half of 2021, there are huge prospects of a sharp recovery as the Canadian prime minister has announced that enough vaccine supply had been secured to allow all willing citizens to receive a shot by the end of summer that would help lift the restrictions and would pave a way towards recovery. It means the second half of the year will be more supportive for the Canadian Dollar that could cause a decline in the USD/CAD pair prices.

Bank of Canada – The Bank of Canada’s position is the same as the US Federal Reserve. Bank of Canada’s Governor Tiff Macklem has also communicated that it will not raise the policy rate until the economy has wrapped up all the surplus capacity. It is expected that the BoC will not change short-term rates until the Q4 of 2023, and according to this projection, the Canadian dollar will remain under pressure for a long period of time. However, as for the QE program, the Bank has indicated that the bank’s e asset purchases, which is currently at $4 billion a week, could be declined with the improved outlook of the economy. It is also expected that the asset purchases will potentially end in 2022. Given this projection, the Canadian Dollar outlook is positive in coming years that would weigh on the USD/CAD pair prices in the coming months.

Crude Oil Demand Recovery – As the global economy is expected to grow by about 5.5% in 2021, it has provided a solid push-up to commodities, including Crude Oil. The expectations for strengthened demand for energy sources like WTI Crude Oil, a major export of Canada, have been accelerated as the vaccine deployment in advanced countries worldwide has started. The vaccine rollout in the countries is expected to lift the restrictions and resume the economic activities at full capacity that will eventually strengthen the demand for crude oil. The potential increased demand for crude oil is expected to provide strength to the commodity-linked currency Loonie that will eventually weigh on USD/Cad pair prices in the coming years.

Inflation Risks – The inflation is expected to lift sharply with the growth projections. The large fiscal deficits funded by central bank asset purchases have already increased the money supply growth extraordinarily. The inflation risks are expected to remain muted as long as the large sectors of economies are restricted. However, soon with the successful vaccine rollouts in the advanced economies, restrictions will be lifted and working in large sectors will resume that could raise the prices to extremely high levels.

Over the short-term, the Central banks have committed not to give any immediate reaction to the rising inflation especially, the US Federal Reserve. However, in the long-run, the central banks have shown willingness to remain committed to low and stable inflation.

The sellers dominate the USD/CAD on the technical front as it trades at the 1.2601 level, and the leading technical indicator, the MACD (Moving average convergence divergence) and RSI (Relative Strength Index), are exhibiting a bearish trend in the USD/CAD currency pair. On the monthly time-frame, the MACD and RSI have crossed below the mid-level (0 level), and 50 respectively, which exhibits a strong selling trend in the Loonie price. The USD/CAD has closed a series of bearish candles on the monthly time-frame, especially after violating the triple bottom support area of 1.2894 level. This demonstrates the sharp selling bias among investors. However, the same support level of 1.2894 is working as the USD/CAD pair’s resistance.

On the other hand, the pair has also violated the monthly upward trendline extending support around the 1.3305 level. This further extends bearish bias for the USD/CAD pair and opens up further room for selling until the 1.2094 support area. 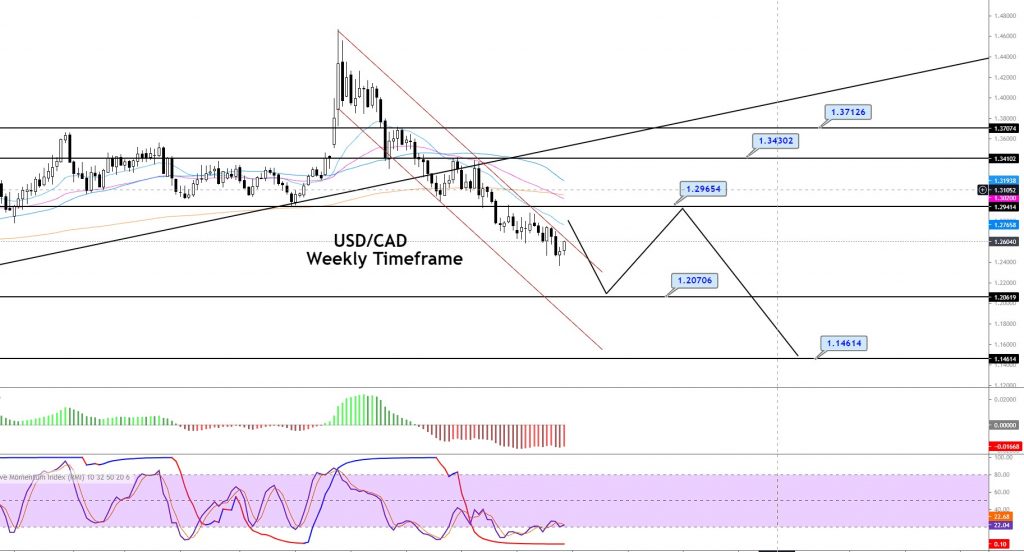 The USD/CAD pair is likely to drop until the next support area of 1.2097 level whereas, an immediate resistance holds around 1.2894 level. At the same time, a further breakout of the 1.2097 level can extend the selling trend until the 1.1269 level. 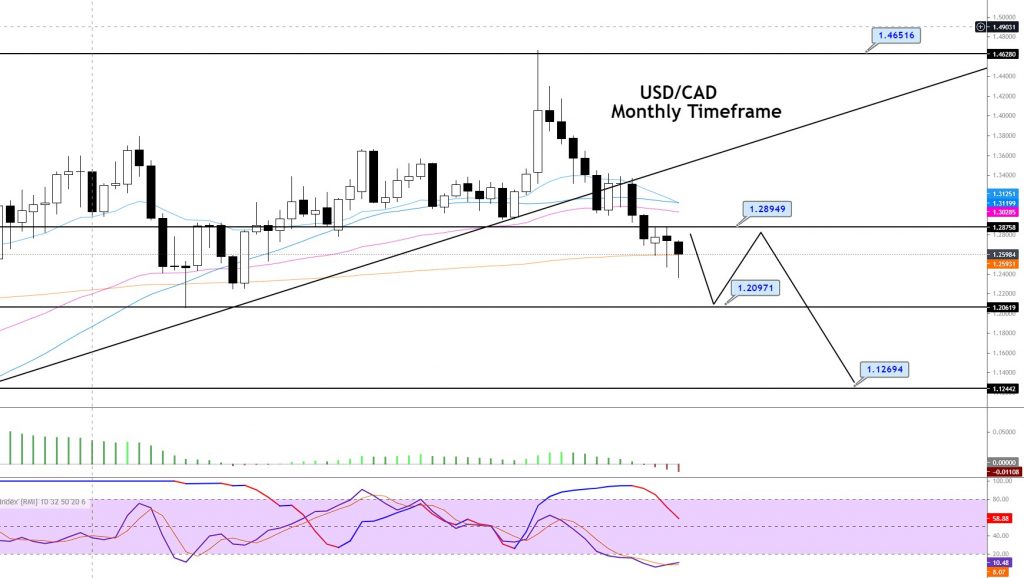 On the weekly timeframe, the USD/CAD pair has entered the oversold zone at 1.2416, and it has strong odds of a bullish bounce off until 1.2965 level now. The series of exponential moving averages are also suggesting chances of a selling bias in the USD/CAD pair. Still, this EMA is holding around 1.29-1.30 region while the USD/CAD current market price is 1.2604 that means the pair has the potential to surge until 1.2965 level before showing further selling trend. The recent closure of the weekly Doji candle is supporting the idea of profit-taking by investors. Let’s consider waiting for the USD/CAD pair to target the 1.2965 level before taking further sell positions. Good luck!