The USD/ILS traded in the 2.60s in the early 1990s. It was on a long-term bullish trend, which stretched further to the upside, as the pair nearly doubled in value by the early 2000s, when it briefly broke above 5.00. The price didn’t stay there for too long, before reversing back down, and it has remained bearish since then.

From 2006 until the global financial crisis of 2008, this pair went through an accelerated decline, taking the price down to 3.20, before retracing higher for about one year, after the crisis. But, the decline resumed again in 2009 and it has been continuing in waves since then. A support area, which lasted throughout the previous decade, formed around 3.40, but it was finally broken in late 2020. The GDP of Israel has been on a steady expansion in the last two decades, as global fundamentals have shown in our forex briefs, which has been one of the reasons for the downtrend in the USD/ILS. The coronavirus has messed up fundamentals everywhere now, but this pair is keeping up the bearish momentum, and it is now facing the previous low at 3.20.

Recent Changes in the USD/ILS Price

Right now, the coronavirus and the restrictions are a massive factor between recession and economic expansion in most countries, and they will continue to be so in the coming months at least. The economic factors that usually drive a currency, depend on it, which is also keeping the central banks dependent on how the situation will proceed. The technicals favour the Israeli Shekel, but if the situation changes, everything could flip over, although the central bank of Israel has increased the forex reserves, which is helping to keep the domestic currency well bid.

USD/ILS Price Prediction for the Next 5 Years

The US Dollar was on a bullish trend for several years, especially picking up pace from 2018 until March 2020. But the situation has reversed since then, and the USD has been on a bearish trend since the surge of the initial panic. The US economy has been performing quite well since the reopening in May, and it kept pace in the fall as well, unlike in other places, where the economy is probably heading into another recession. However, the US Dollar has been in a constant decline, which accelerated in November after the US elections. Economists associate this with the coming economic stimulus, which should be around $ 2 trillion, which is likely to weaken the USD, even though a similar package in the Eurozone had a positive impact on the Euro.


The economy of Israel, on the other hand, returned to contraction in the fall, when the new lockdowns were imposed, even though the restrictions have been eased somewhat since November. The economy bounced back nicely in Q3, as the GDP expanded by 37.9, in contrast to the 29.8% decline in Q2, during the first lockdown. Nonetheless, YoY GDP still remained negative in Q3, falling by 1.9%, following the 7.1% decline in Q2. Q4 should be worse, due to intensified restrictions, although the Israeli Shekel has been gaining ground against the USD, as the decline in the charts shows. But, that could also be attributed to the fall of the USD during 2020. The increase in forex reserves is another factor, although YoY CPI inflation has been negative since October 2020. But, the Bank of Israel (BOI) is probably the central bank that has cut interest rates the least in 2020, bringing them down to 1.60% from 1.75%, which is only a minimal cut. This has kept the Shekel steady, while the USD has been declining, pushing USD/ILS down.

USD/ILS Technical Analysis – The First Support at 3.40 has Been Broken

In this section we will take a look at technical analysis for USD/ILS, which looks bearish, unless the previous low olds. In the early 1990s, this pair was trading at about 2.60, as we mentioned in the opening, but with a strong bias to the upside, which lasted throughout that decade. The pace of the uptrend was quite strong, and it accelerated further, pushing the price above 5 by the middle of 2002. But, that was it for buyers, and the reversal started to take place. We saw another attempt to the upside at the end of that year, but buyers failed to reach the 5 level, and the price formed an upside-down pin candlestick in February 2003, which is a bearish reversing signal after the uptrend. 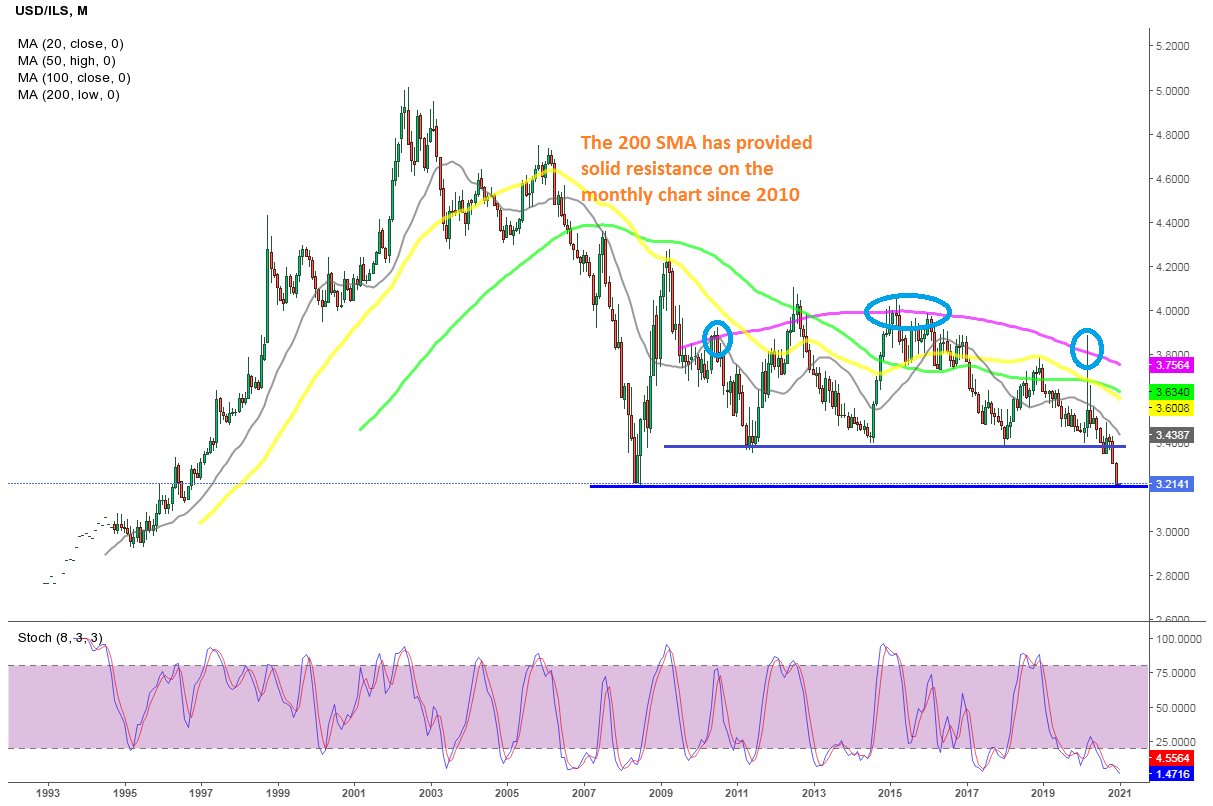 The monthly chart looks bearish for USD/ILS, unless the support holds

Since then, the pressure has been to the downside, despite the bounce off the low at 3.20, after the 2008 crisis. That is confirmed by the lower highs in the USD/ILS pair, which have been declining during every retrace higher. Moving averages have been doing a great job as resistance, particularly the 200 SMA (purple) on the monthly chart, which stopped the climbs throughout the last decade, while the bottom was provided in the area around the 3.40 level. In February this year, the price bounced off that support zone for the last time, and the price surged to 3.89 during the panic in March, but the 200 SMA put a stop to the surge and the price finally broke the support zone in the second half of 2020. Now the USD/ILS is heading lower, and if the 2008 low of 3.20 is broken, this pair will head for 3.00.