What Is A Bear Trap on the Stock Market?

Trading stock markets and financial markets in general means finding opportunities to buy which are not too risky. That’s why we use trading strategies. Although not all trading strategies are profitable, quite a few of them are really good, some of which we have listed on our strategy page.

But it’s not only that. Trading has another side to it in the opposite direction, like a coin. Not only should we look for a good trading opportunity, but we should also watch out for trading traps. We should differentiate between trading opportunities and trading traps, such as bear traps. That’s very important though, because there are many trading opportunities which don’t turn out to be as they appeared at first, instead they turn out to be false breakouts. Actually, this aspect of trading might be even more important, because if you don’t lose money then you will end up winning eventually.

What is a Bear Trap?

Usually, traders place their stops above the support level or the moving average, which is supposed to turn into a resistance when broken properly. But, there is no proper breakout, just a piercing of the support level/moving average before the price moves up again. Traders who start selling right away as the piercing happens, get caught on the wrong side, in this case the short side, during bear trap trading.

How Does a Bear Trap Work?

The above question can be “Why Do Bear Traps Happen” as well. Large players in the industry, such as big pension funds, banks or investment corporations attempt to shake out the weak longs or shorts. They do this in order to buy stocks at wholesale prices. So, the lower the entry price the better for their profits, since they also play the long game with extremely low exposure, compared to forex traders like us.

Since they usually invest in stock markets and stock markets usually are bullish, when markets are retreating lower, in order to create demand for a certain stock they push it to or below a certain level. Seeing that the price is low enough, they take the opportunity to jump in and resume the bearish trend. Sellers who jump in immediately get caught in when the bullish reversal happens. Buyers who had placed the stop loss target of their trade closely below a support level or a moving average, get their stop losses triggered and big players have an open field. Why do they do it? To maximize their profits, obviously. So, they’re not good people for normal forex traders like us, since they are our competitors and make life a bit more difficult for us.

A good example of a bear trap can be found on the chart below. As we can see, GBP/USD is trading on a bullish trend on the daily chart. This pair had formed a support level at around 1.25 as it retraced lower and then bounced higher to 1.28 from there.

But, it returned from down there, and pierced the support level. I personally don’t like to enter a trade on the short side right away once a support level has been broken because you get burnt often when trading on first thought. The horror breaks loose when the price reverses back above the support level and the candlestick closes as a hammer, which is a massive bullish signal. Then the bullish trend resumes and this pair climbs above 1.33 eventually. This is the perfect bear trap. 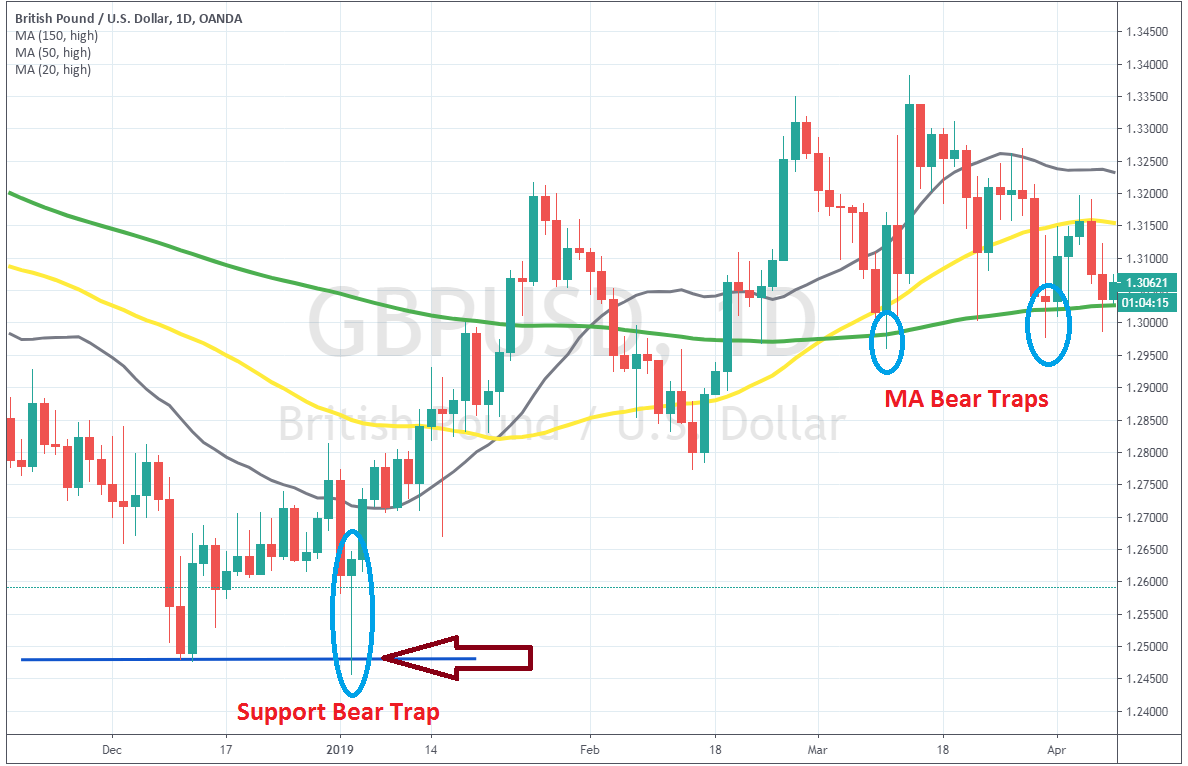 In the chart below, we have three perfect examples of bear traps during an uptrend. The price has pulled back down, pierced the moving averages and then reversed back up, pushing the bullish trend higher.  If you went in on the long side once the piercing took place, then you would end up with three losing trades. If you waited until candlesticks closed, then you’d save yourself some money and probably make some on the way up. 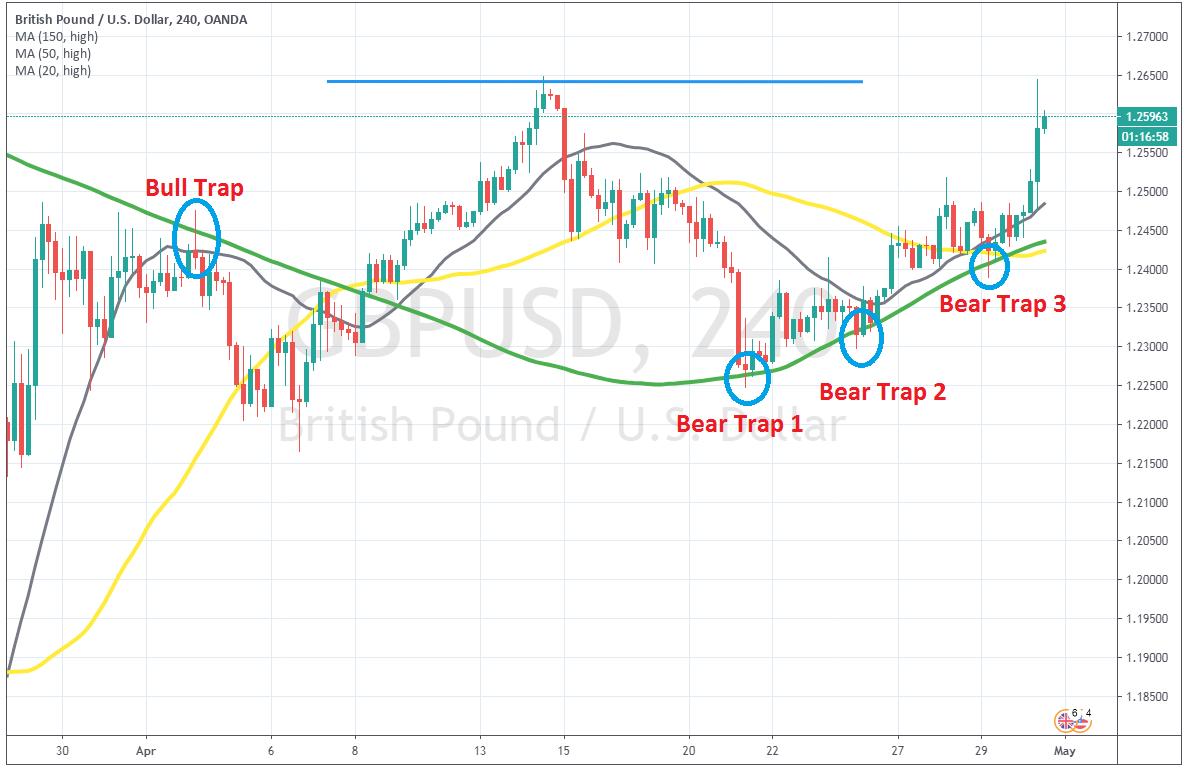 3 Types of Candlesticks in Bear Traps

This is the prime example of a bear trap in financial markets. After the support is put in place just below 0.84, EUR/GBP moves higher, but finds resistance at the 50 SMA (yellow). After trading around it for some time, the price moves down and it breaks below the support level. This is tricky, because we are just below a big round number, so traders think that the support has been broken. But, the price pulls back up and the candlestick closes above the support. After trying the support for the third time, eventually EUR/GBP turns bullish. 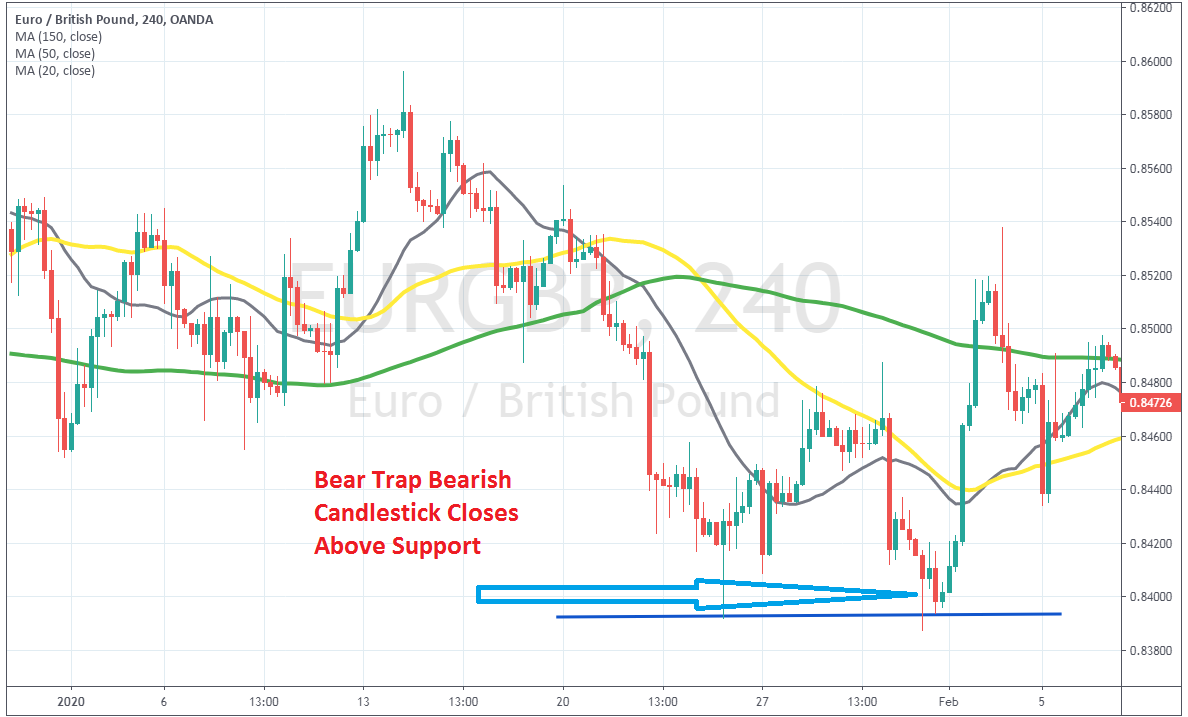 The bearish candlestick which closes below support is another tricky one for forex traders. After several attempts to break the support at 0.83, all of which are rejected, the break finally comes, or so it seems like. The support comes right at 0.83, which is another big round number and on top of that the candlestick even closes below it. But, the next candlestick takes the price right back up, above the support and then to surge higher for 300 pips, after the 50 SMA turns into support. Sellers who sold right after the candlestick closed got their trades smoked as the bullish reversal came. 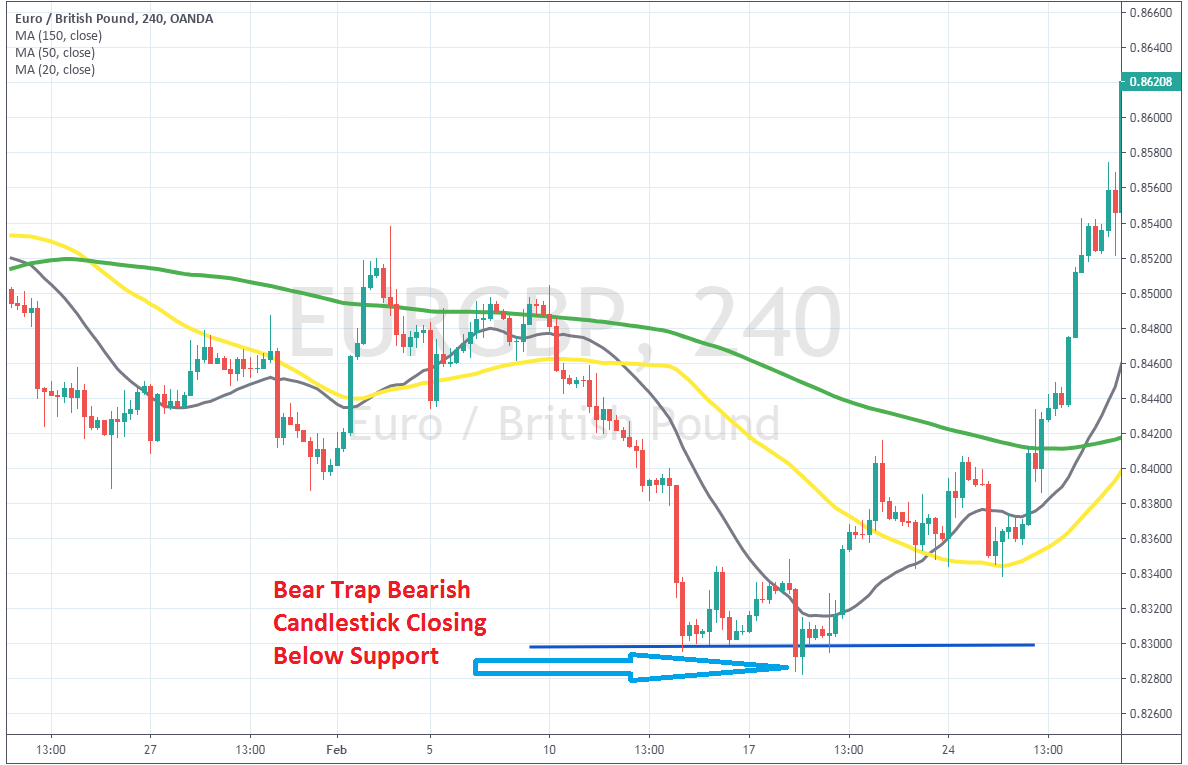 In this third example, the trend used to be bearish but EUR/GBP formed a support zone just below 0.87 and the trend slows. This pair trades in that range between the support at the bottom and the 50 SMA (yellow) at the top for nearly a month, apart from an attempt by the middle of the month to reverse it higher. Then comes the bear trap. The price fall below the support, but then pulls back up and closes above the support and forms a doji. This is the nightmare for those who sold right after the support was pierced, because this is the perfect bullish reversing candlestick. Then the price broke above both moving averages and the main trend seems to be shifting. 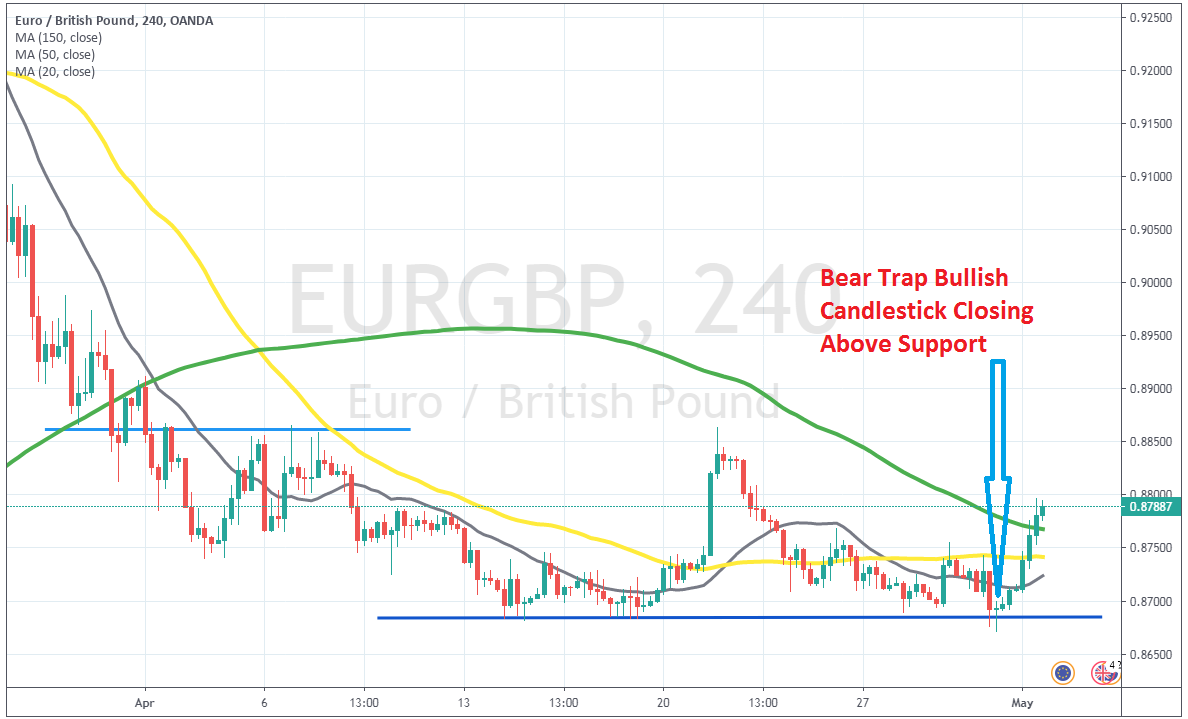 How to Avoid Bear traps

When speaking/reading about support and resistance levels, many traders take them literally and see them as just a line. Say, S&P is trading at 3,050 points and has formed a support level at 3,000, which has held declines a few times before. Once the price falls below that support level, some traders jump right in to sell, which often gets your trade killed. That’s obviously wrong, because that would mean thinking of the support as just a line in a wide range of trading. It doesn’t make sense. Support and resistance levels are to be considered more as a buffer zone, rather than just a line in the sand. So, don’t place your stop loss just below the line. Every trade should have some breathing room because this is not just fixed geometry, but rather a fluid game of cash flow.

Trade the Retrace, Not the Breakout

My colleagues sometimes point missing trades at me, because I don’t like to sell right away as the breakout happens for the sole reason not to be caught up on the wrong side when the bullish reversal takes place. As we know, in forex there are many fake-outs which are perfect bear traps. Basically, a break of a support level that doesn’t quite materialize. In order to be on the safe side, I prefer to sell when the price comes back up and tests the broken support level. If it holds and turns into a resistance, then that’s the perfect confirmation that the breakout is real and I sell after receiving a bearish candlestick.