As other traders will likely say… we expected the forex market and all other financial markets to be a bit more rational this week since the Chinese stock market was closed due to the Chinese New Year. But no, it wasn´t meant to be. The volatility increased and the safe haven currencies beat any expectations as the forex market entered into panic mode. The Yen jumped about 500 pips and the Euro and the Swiss Franc followed. Not even a ‘less-dovish-than-expected’ Yellen could calm the trader’s nerves. 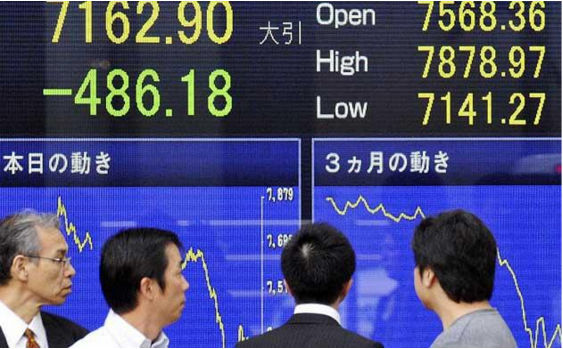 The selloff of the stock markets and commodities accelerated and the Yen broke every level without any resistance. As we mentioned last week, these levels are what we rely on for our trading and there´s not much more to go off of, so when they count for nothing we have difficulties. I mean… look at the USD/JPY chart below; two weeks ago the Bank of Japan (BOJ) made their interest rates negative and increased the QE program and this pair jumped about 300 pips. The price slipped down the next few days so normally we thought that it was a good buying opportunity with the BOJ covering our back. On top of that, having resisted several attempts during the last few years the 116 level appeared quite solid and a couple of moving averages on the weekly and daily charts added additional strength to that level. But, in times of crisis no support/resistance level is strong enough. We all know what happened; this pair cut like knife through butter to 111 and that fx signal got smoked. That fx signal contributed the most to our losses – without it we´d have been much better. But in times of crisis everyone loses money, the companies, people who own stocks, commodity countries and traders as well. That´s not an excuse, though. We lost 487 pips this week but the good thing is that there´s still two more weeks to go until the end of the month and we will work hard to get back those perished pips, or at least, a large part of them. 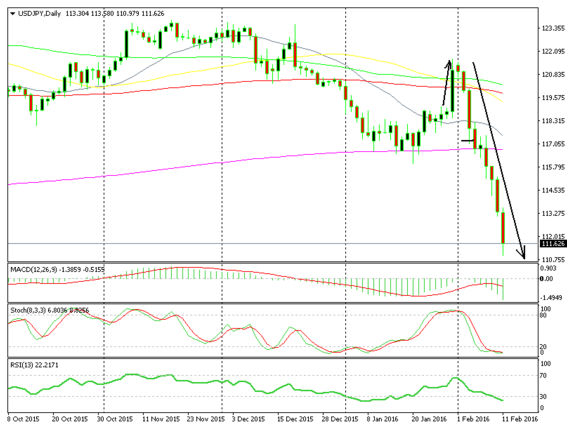 We complained last week about high volatility but we never knew we were in for an even bigger and nastier surprise this week. Since the first day, we have had a taste of what was to come. The risk currencies and the US Dollar suffered heavy losses while the safe haven currencies rallied with the Japanese Yen being at the forefront. The stock markets around the globe continued to accelerate their decline as the week progressed. By the end of the week, they had lost between 5% and 10% of their value – Nikkei lost a little more than 15% of its value. The BOJ´s Asakawa commented that they were watching the market closely. The situation only got worse and the Yen continued to rapidly appreciate. USD/JPY reached 110.98 on Thursday morning as the panic reached the peak. So, many economists came to conclusion that the world economy is entering a downward spiral and heading for another economic crisis like the one in 2008. Despite endless commentary from the petrol producing countries about cutting or freezing production, the petrol price continued to slide reaching 26$/barrel and the gold is flying, so a global crisis scenario looks very possible. In fact, we are going through a mini-crisis right now. A lot of money has been thrown into the commodity markets like Brazil, Australia, Canada, and oil producing countries etc. for far too long. This is in order to increase supply and has affected these countries’ economies which ripples further across the world; things are looking gloomy at the moment and the central bankers are failing to acknowledging it. Anyway, on Thursday morning the Yen reached the peak and shortly after the BOJ did a “ring around”, calling the second level banks to ask about the actual prices (aka they were just about to pull the trigger and intervene). The Yen fell about 200 pips in a few minutes, but there was no intervention. Another big event this week was the two-day Yellen testimony at the US congress. With the recent developments, many were thinking that her comments would be dovish, but she was a little more relaxed tand this increased the odds of the rate hike path for 2016, however, the odds are still much lower than when they hiked the rates in December.

With China off this week, the data started with the Japanese current account on Monday which was above the expectations. The Eurozone Sentinex investor confidence came out later that day  below last month´s number and expectations. On Tuesday, the German industrial production numbers showed a decline in the sector for January while the UK current account deficit was a bit lower than expected, but on Wednesday, the manufacturing sector showed a slight contraction, with the same as the French and Italian industrial sector. On Thursday, the US unemployment claims came out below the expectations which suggests that the employment in the US is on the right track and this news calmed the markets a little. On Friday, the German and the Eurozone quarterly GDP numbers came out unchanged, both at 0.3%. In the afternoon, we had some more encouraging economic data from the US, with the retail and core retail numbers beating expectations and last month’s numbers being revised higher.

Since USD/JPY has been the wild child this week we thought we´d start our analysis with this pair. As we all know there has been one-way traffic for about four years, moving up from around 0.75 to 1.25. But, this month the roles have been switched. It has fallen about ten cents from 121 to 111, where it found some resistance. That level is 2008’s high and with some help from BOJ the price has closed the week about 200 pips higher, but it couldn´t close above the 20 MA in the H4 chart so this might be just a retrace before the next leg down. The month is not over yet and with what we have seen these last two weeks, you never know what might happen. The next level on the downside is 110 (obviously) and then 105 which was the high for 2013. On the flip side, 115 will be the first line of defence and then 116, which has been a strong support level in the last two years. 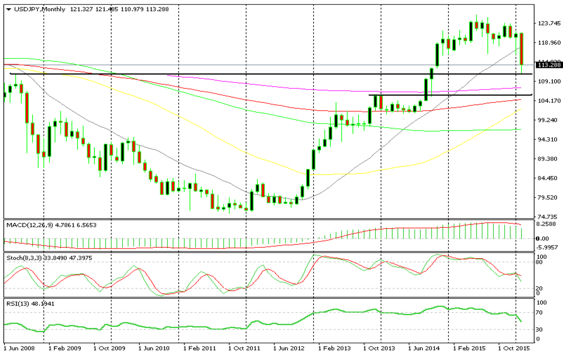 The 111 resistance level held well on the first attempt 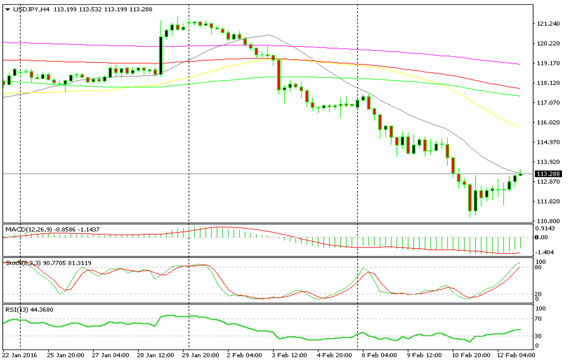 The price couldn’t close this week above the 20 MA.

With the Euro being a funding currency (and we all know that in troubled times the funding currencies find support), we were expecting EUR/USD to move up in the last 4-5 weeks. The 1.08-1.10 consolidation range was broken last week, as we have pointed out before, and this week the uptrend has continued – being aided by the 20 MA in the H4 chart. The 100 smooth MA in the daily chart, which publishes at around 1.11, has been broken as well and it has now turned into support. So that´s the first line of support if this uptrend is to reverse. On the top side, the first resistance comes at 1.1450 and then 1.15, where we see the 20 MA in the monthly chart. The ultimate resistance level was the high from last August at around 1.17. 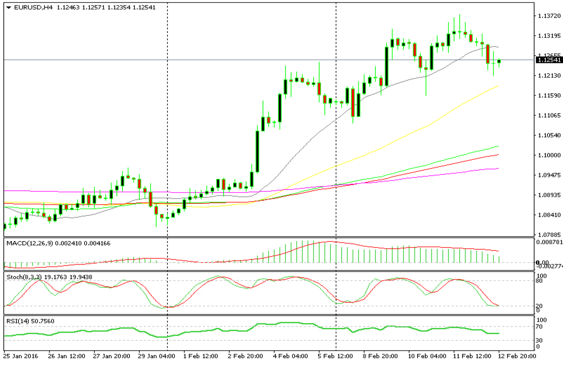 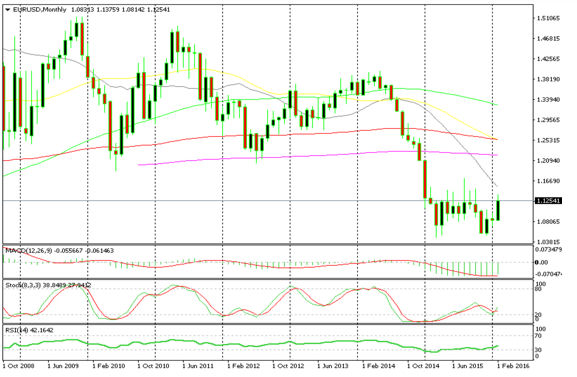 The 1.15 and 1.17 are the major resistance levels in the monthly chart

We closed another wild week and the world economy doesn’t seem any better. In fact, the future seems much gloomier that a week ago. The financial markets around the globe and the forex market are displaying signs that something much bigger is about to come. Some say that the world economy will go through another financial crisis like the one that took place in 2008 and personally, I hope that things turn around for the sake of the many people who suffer during crisis. The markets calmed somewhat on Friday, so hopefully this was the end of it.