We all know that trading in the forex market is not always easy. Sometimes every technical indicator points in a certain direction and yet the market moves in the other direction. Other times the fundamental outlook of an economy is very bearish for the currency of that country, and regardless, it keeps moving higher compared to other currencies.

A good example of this is the uptrend in EUR/USD from mid-2012 until May this year. The economy of the Euro Zone as a whole was in stagnation with many countries still in recession, the political scene was unstable and inflation was falling, which was bearish for the Euro. Across the Atlantic, the US economy was performing well, and despite the poor numbers from Europe, the pair kept ascending to 1.40.

Another example, is the upward movement in EUR/USD in early October, from 1.25 to 1.29 in just a few days. On Friday the week before, the US unemployment rate declined from 6.1% to 5.9% and EUR/USD fell about 170 pips. On Monday the following week, the pair climbed even higher. This appeared to be a normal retrace after such a big fall. So what do you do on such occasions when the downtrend is so strong?

Obviously, occasionally you sell during retraces, and that´s what we did. The pair kept crawling higher and we kept selling, first at 1.2540, then at 1.2550 and finally at 1.2570. But this pair reversed the 1.7 cent loss on that same day and reached 1.29 in a couple of weeks. So what happened, why was it moving up when all fundamental and technical indicators pointed down? The simple answer is the market sentiment.

Market sentiment is crucial in order to not only understand the market but also to be able to successfully trade in the forex market and other financial markets. Occasionally it´s easy to read because a look at the main trend in the charts of a certain pair will tell you all you need to know, like the uptrend in EUR/USD from 2012 to 2014. However, it´s not always easy, as we saw in the second example. and can lead to big losses.

Ways to Read the Market Sentiment

We often hear that the most important indicator in forex trading is the trend. The trend shows the market sentiment. However, trends can sometimes be tricky to trade. You might be a daily trader trading the 15 minute and one-hour charts and the trend there might point in one direction, so you place a trade in the same direction. Hours later you see that the trend has changed and you are losing money.

How did the trend change so fast? The bigger trend in the 4 hour or daily chart may have been trending in the opposite direction and the trend you were looking at was just a correction of the bigger trend or a trend within a trend. So before placing an order based on a smaller timeframe chart, it is important to look at the bigger time frame charts. This way you can see how the market really feels and which side it really is positioned on.

Another way to understand market sentiment is to concentrate on one pair at a time. In this way, you´ll get a good reading of the pair. There are successful traders that trade based only on their instincts of the price action. You have to observe how fast a certain pair moves in both directions.

If the up moves are faster than the down moves, it shows that traders are willing to buy first and ask questions later. This makes the overall market sentiment bullish. You can also watch how a pair reacts to economic news related to both currencies. For example, if there was good economic news from the UK but the GBP/USD bounces based on the good economic data are getting smaller every time, it means that the market sentiment for this pair is turning bearish.

The sentiment is even more bearish if recent positive economic news hasn´t succeeded in forming an uptrend. When you trade stocks you can look at the volume that is being traded because the stock market is centralized on the stock exchange floors, but this doesn´t apply to forex trading. 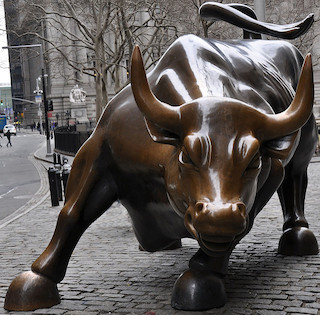 Is the price action bullish or bearish today?

The best volume indicator in the spot forex market is the Commitment of Traders Report (COT), which is published on Fridays at 7:30 GMT by the CFTC. It shows the net short and long trades of commercial and non-commercial/speculative traders in the forex futures market. By using this report you can see how the big traders are positioning. Their positions will affect the spot forex market in the near future.

As usual, the best way to trade is to go with the trend. Using this logic, it´s obvious that you buy if there are more net longs and sells if there are more net shorts. But there are occasions that it´s best not to go with the trend. When the buy positions are in extreme levels, it best to sell or at least wait. This is because if everyone has bought there´s not many people left to buy and a currency cannot rise if no one is buying. Sooner or later they will close their buy positions making a reversal imminent. It´s better to use this indicator/report for medium to long term trading because it is a weekly report. If you are a short term intraday trader you can use it to indicate the trend.

You can dive into this indicator by reading our price action guide.

International events are important in setting the market mood. Some of them might happen on the other side of the globe and might seem unrelated to a certain currency. Nevertheless, in this global world, we live in everything is connected and has potential to affect the markets, particularly in the case of the financial markets.

For example, the nuclear plant disaster in Japan a few years ago had a big impact on all major currencies across the world. At first glance, the Swiss Franc has no relation to what happens in Japan. However, as it is a safe haven currency it surged higher amid fears of another global crisis. Another very recent example is the crisis in Russia a few weeks ago. EUR/USD doesn´t have any direct connection to Russia but the flow of cash from Russia into the Euro Zone helped this pair move about 300 pips higher.

For more about how to use the news to your advantage when trading: Trading the News – Forex Trading Strategies

In conclusion, market sentiment is a very important aspect of trading in the forex market and financial markets in general. All these factors set the mood for traders and decide what the market sentiment will be. It may seem difficult but if you are serious about becoming a trader it is critical to make the effort and practice this strategy. Getting to feel the market in your veins can come only with experience.