We would like to start this article expressing our sympathy for the families of those affected in the Brussels terror attacks on Tuesday. The market reflected this disturbing event for a couple of hours, but then its nerves calmed and we returned back to a normal trading state. In fact, apart from that short period, all this week has been quite calm, unlike the last two weeks when the central banks drove the market crazy. Again, we closed the week with 90 pip profit… so we are 545 pips up for the month so far! 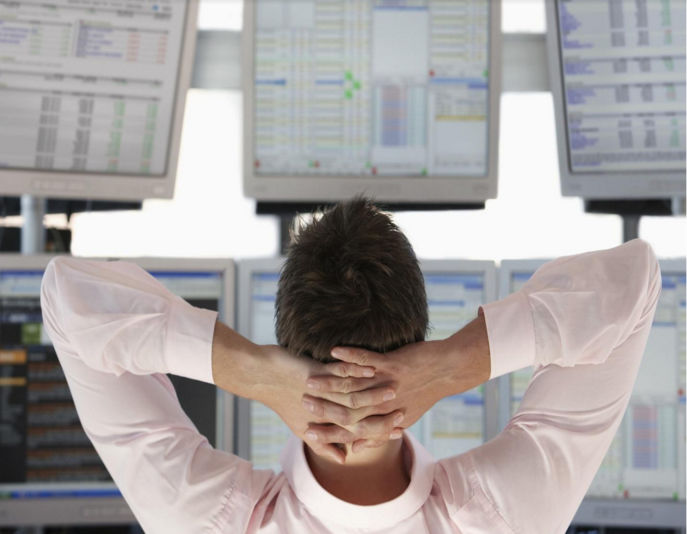 We finally had a breather after two crazy trading weeks

This has been a relatively quiet week compared to the last two. In those weeks, we were seeing movements of 300-400 pips, however, this week they only moved within a 40-50 pip range. It was a short week as well because this was Easter weekend. Friday was Good Friday – with most of the western markets closed, and since Thursday mid-day, the volatility really declined. This week our profits included a 90 pip gain, which brings the monthly total to 545 pips thus far and the fourth successful week in a row! We started the week on Monday with two winning forex signals worth 50 pips. On Tuesday, we had a losing forex signal in the morning but recovered with two winning signals later on and closing the day with a 7 pip profit. Wednesday, we had a 15 pip setback from our two forex signals but returned on Thursday with two winning forex signals that garnered us 90 pips. We still have three open forex signals, two long-term and one short-term, which seem to be going in the right direction. As you are aware, we opened the EUR/USD long-term sell forex signal after the first wave of USD selling last Wednesday afternoon following the FED´s dovish statement. That signal is seeing some profit now – but we should have waited for the second wave of USD selling which took place in the next day, pushing EUR/USD up to 1.1340s. If we had waited a little longer, that forex signal would be more than 170 pips in profit by now, but as we said the price is still moving in the right direction at least. So to recap, we had 12 forex signals this week: two of which hit stop loss, seven that closed in profit and three which still remain open. That brings the win/loss ratio to 78:22 for the closed forex signals. 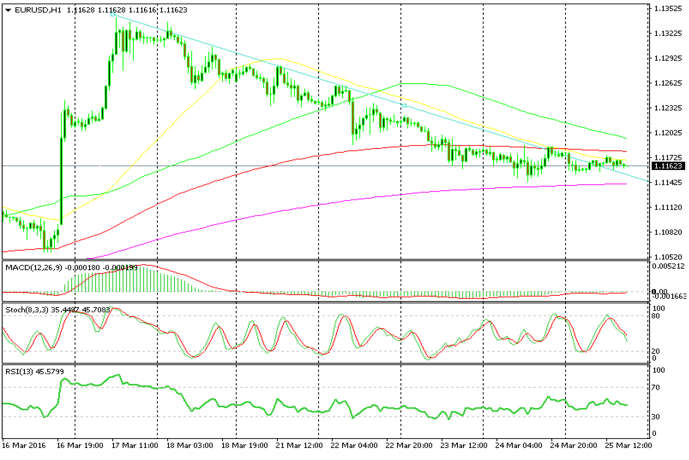 After shooting up 300 pips, EUR/USD has been declining steadily.

The price action in the forex market has been heavily affected by the central banks in the last two weeks. Two weeks ago, the ECB went to extreme lengths regarding their monetary policy as the original QE program wasn´t putting forth the desired effects. The market took this as a positive sign for the future of the world economy, and the European economy in particular, so the Euro surged for about 400 pips. Last week, the FED took their turn and delivered a surprisingly dovish statement, more than a month after the market turmoil which happened in the first half of April. This sent the US dollar tumbling down again by an additional 300 pips. However, this week was calmer. There were no big central banks this week to surprise the market and, therefore, the market followed the normal logic. The US Dollar gained about 200 pips against the Euro which is only common sense since the two central banks have entered in very divergent monetary policies; the ECB just increased the monthly asset purchase by an additional 20 Billion Euros and cut the rates further, while the FED hiked the rates in December and will certainly hike again this year unless things go terribly wrong (unlikely). So, basically the US Dollar gained against most majors this week, particularly against the British Pound which lost nearly 400 pips. This USD demand was partly due to market logic and partly due to the FED members, who delivered some hawkish comments just one week after a placid FOMC statement. That hurts the FED´s credibility and makes them look like they have no idea what they´re doing. Anyway, the Dollar benefited from all this rhetoric this week. Another event this week worth mentioning are the Brussels terror attacks. After the attacks Tuesday morning, the market was a bit unstable, but it recovered pretty quickly.

On Monday, the economic data was slightly negative. The Eurozone consumer confidence declined 10 points and the European current account missed the expectations – but at a 25.4 billion Euros surplus, the data it´s pretty impressive! The US existing home sales also missed the expectations later that day. Mixed data was presented from the EU, as the German and French manufacturing numbers came out below the expectations but the service sector beat them. The British inflation numbers missed, but the core inflation remained steady at 1.2%. The German ZEW economic sentiment deteriorated while the economic sentiment for the entire European area improved. The economic data was very light on Wednesday, with only the New Zealand trade balance worth mentioning (and it improved a lot). The UK retail sales declined less than anticipated but that´s understandable with the huge jump the previous month on Thursday. The US employment numbers were solid later that day but the durable goods orders posted some negative figures. Good Friday, of Easter weekend, was almost dead but the US final Q$ 2015 GDP revision made the things brighter as it came out at 1.4% against 1.0%, previously.

The petrol price has declined about $2 this week from highs of around $41.60/barrel last weekend. That has translated into weakness for the CAD, and thus the USD/CAD has had the first week of gains after nine consecutive losing weeks. The candle engulfs last week´s candle and that´s a bullish sign… but with the petrol producers meeting coming up in April we won´t try to be heroes and go long right now. On the daily chart, we see that after making a doji last Friday the price moved up about 300 pips this week, so it was time to open a long-term signal for a few hundred pips. But after nine consecutive weeks of declining numbers, we were hesitant. Anyway, the price is just below the 100 smooth MA and the 20 MA in that timeframe chart, so we will see how it will behave. If it breaks above, that will be a bullish sign, if not then we will wait for a better entry price further down before opening up a long-term buy forex signal in this pair. 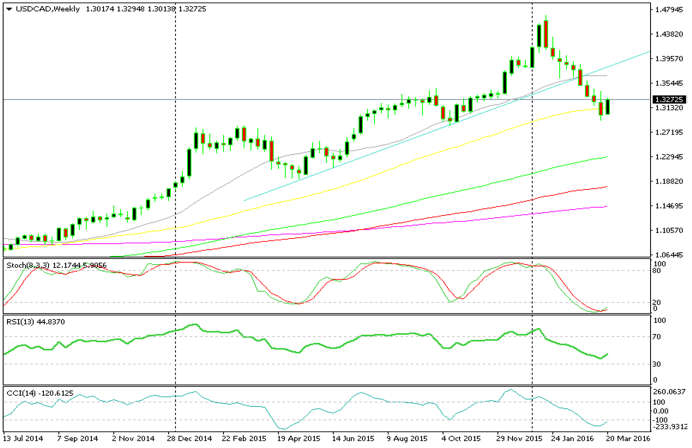 The engulfing weekly candle is a bullish indicator 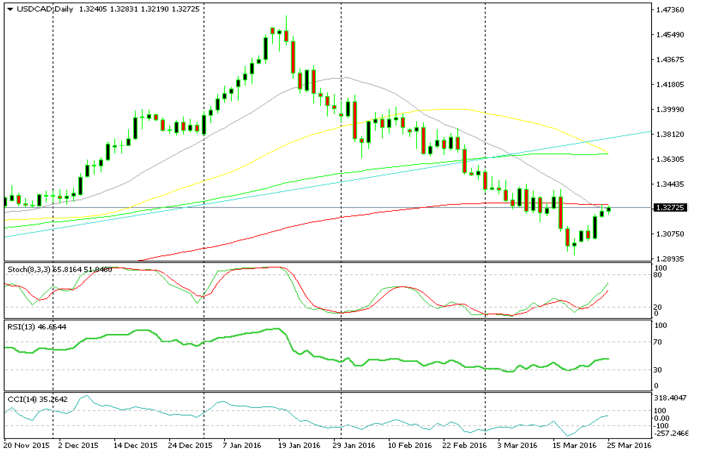 We are just below the 100 smooth MA

EUR/USD moved 300 pips up after the FED´s dovish FOMC statement last Wednesday.  That came after the previous week, where this pair had already moved 400 pips higher after the ECB meeting. Since Thursday before last, this pair has been in a constant downtrend, turning south and making new lows after retracing to the downtrend line on the hourly chart. The price is above the trend line now, but that´s because Friday and the weekend was a Western holiday, and as a result, the price couldn’t go anywhere. However, on the H4 chart, we see another picture. An Elliott Wave Pattern is unfolding and it looks like we are its fourth wave, which is the retracement wave. But, it remains to be seen if the pattern will be completed. 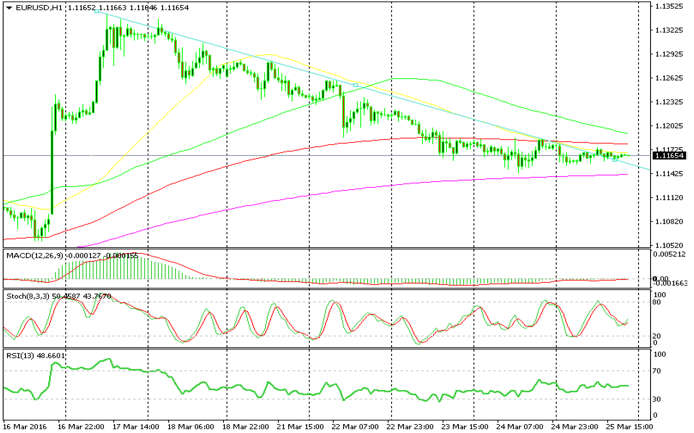 EUR/USD has been in a continuous downtrend all this week 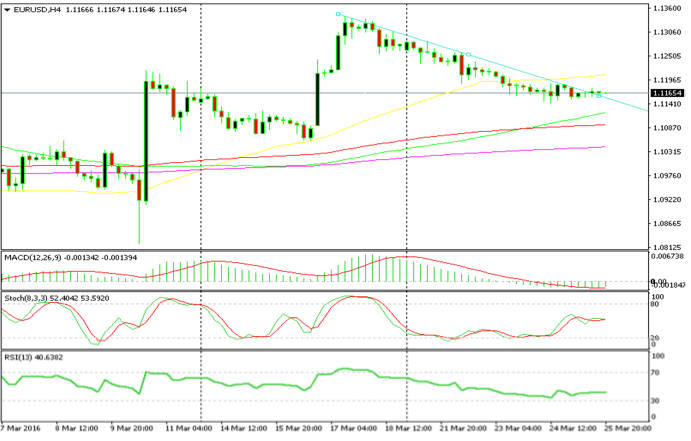 We closed the fourth week of March and are edging closer towards the end of the month, increasing our profits every week. The volatility has been very high, but this week the price action was very quiet, apart from a short period after the Belgium attacks. So, we only had 12 forex signals, three of which remain open, but the profit was good nonetheless. This weekend was Easter weekend and we wish a Happy Easter to everyone who celebrates this holiday.