Hello everyone, hope you are feeling cheerful! We know we are at the office after another great week. Having been helped a great deal by our long-term forex signals, we managed to close the week with a whopping 357 green pips. The fear has worn off in the financial markets and suddenly everything seems just peachy in investor’s eyes. USD/JPY has found its feet again and the troubles emanating from China troubles a thing of the past. The petrol prices have bounced and the sentiment has improved, which assisted in boosting our results. We will discuss all of the above and more further on in this article. 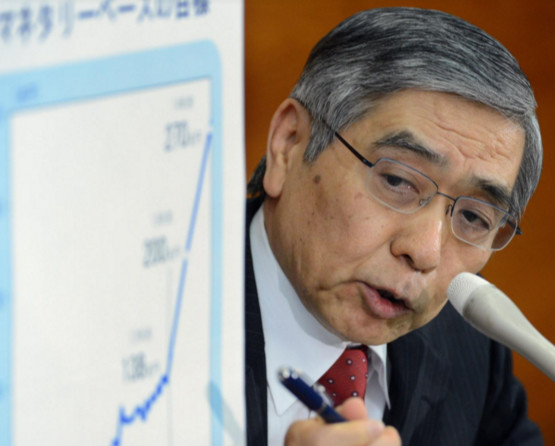 After weeks and weeks of uncertainty and negative sentiment in the markets, the nerves have finally calmed, and suddenly the world seems like a better place. What is supposed to go up during periods of risk-on sentiment is going up and what´s supposed to go down has followed suit. This has made trading so much easier for us and the 357 pip weekly profit from our forex signals perfectly portrays the situation. 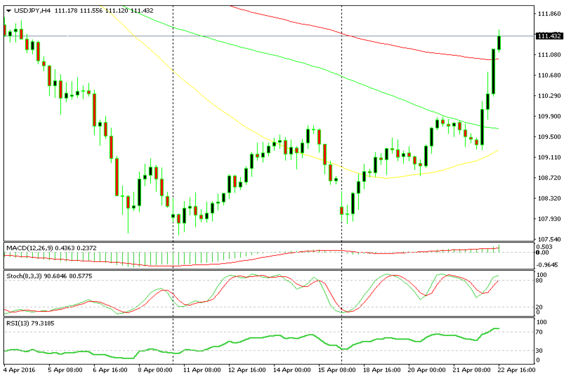 USD/JPY has declined a lot in the last two months, despite the Japanese economy being in contraction.  But this week the market finally became rational – and since the sentiment improved this pair was supposed to increase, which it did, helping us with the two long-term buy forex signals set on this pair. We also got a helping hand from the BOJ (Bank of Japan) with their comments about loan negative rates. The ECB (Europian Central Bank) where they could, beckoning an EUR/USD 100 pip on Thursday to 1.14, a place where we opened a sell forex signal and got more than 100 pips from it. In total, we opened 19 long and short-term forex signals this week with three of them still remaining open. We only had five losing FX signals which gives a 74:26 win/loss ratio. Our most profitable days were on Thursday and Friday, where  we made 199 and 141 pips, respectively.

The last three months have been very tough; fear was all over the financial markets, volatility was immense and everything was irrational. There was fear of a global economic slowdown, worry of a possible Chinese crash and that the petrol producing would go bankrupt due to the falling prices of petrol. All of this led to some crazy moves in forex, with USD/JPY falling to 107.50s from 125 in only a couple of months. This week, though, it seems like nothing had happened. Everything calmed, the financial markets came back to their senses and USD/JPY reversed.

It started with USD/JPY near the bottom at around 107.50-60. The Canadian Dollar, on the other side, opened with a 159 pip gap higher and petrol with a 2 cent gap lower. The summit of petrol producing countries in Saudi Arabia the previous day didn´t produce any agreement to freeze output or exports so it was normal that Petrol and Canadian Dollar would open lower. But as the week progressed the sentiment improved. Everyone suddenly started to see things positively and petrol prices started reversing, with WTI (West Texas Intermediate) closing the week above $44/barrel despite the failure at Doha. The Canadian Dollar benefited as well. Even the ECB president Draghi (who always sounds sour) suddenly became neutral in the press conference on Thursday. He even managed to throw a couple of positive comments here and there about the improved lending and the better tone in the global financial markets. On Friday morning, the BOJ promised to give away free money by lending to banks with negative rates. That gave the USD/JPY a big push, sending it 400 pips up from the lows on Monday.

This week has been pretty quiet regarding the economic data, as most of the action was provided by central banks and market sentiment. Still, let´s have a look at the data. On Monday, the consumer inflation in New Zealand jumped 0.2% for March from -0.5%, which was a good thing. On Tuesday, the German and Eurozone Zew economic sentiment both beat the expectations and lifted the Euro somewhat. Later that day, the US building permits and housing starts missed the boat but the USD remained unfazed. In the afternoon, we had another dose of volatility coming from the conferences of the RBA governor Stevens, the BOE governor Carney and the BOC governor Poloz. On Wednesday, the earnings in UK missed out  by 0.3% and the claimant counts posted a 6.7k increase while the unemployment remained unchanged at 5.1%. The US existing home sales beat the expectations which balanced the miss in the previous day. On Thursday, the US unemployment claims fell gain but the attention was at the ECB that day. As we said above, Draghi made a couple of hawkish comments but the Euro declined anyway. The German and French manufacturing and services PMI came out mixed – which didn´t help the Euro. Later in the afternoon, the Canadian inflation numbers and retail sales came out much better than expected and these are  a good sign that higher petrol prices are helping the economy.

USD/JPY finally hit the bottom and has already started a reverse, At least that´s how it looks on the daily and the monthly charts. In the monthly chart, we can see that the price touched the 200 smooth MA which has provided resistance before. It has now turned into support since the price backed off from it and is now more than 400 pips higher. The stochastic indicator in the same timeframe chart is oversold, so that´s another sign that the reverse is underway. In the daily chart the price is just below the 50 MA in yellow and the stochastic indicator is already overbought. That MA comes at around 112 which is a round number, so this may prove a bit of a hurdle, but the BOJ meeting is next week and the expectations of further easing might push it higher past the 50 MA. 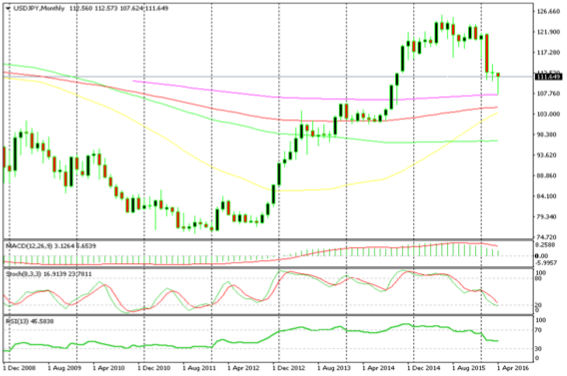 The 200 MA provided solid support to this pair 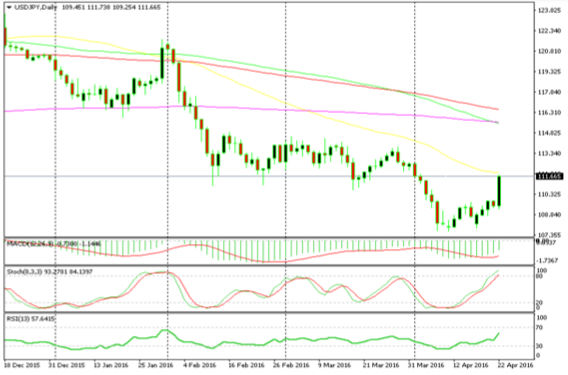 The epic USD/CAD uptrend, which lasted four years, has been matched by an epic 21 cent retrace. It is about 2/5th the size of the uptrend but judging by the short time it took to happen you can call this a very decent fight and a very strong retrace. Right now, it has encountered an equally strong support level which is formed by the 200 smooth MA on the monthly chart. The stochastic indicator is also almost oversold which gives the buyers another reason to pull the trigger and the sellers another reason to close the shorts. On the daily chart, we see that the price made a doji on Wednesday and the next day this pair rallied about 150 pips up only to be capped by the 200 daily MA and reverse on Friday. Still, it failed to break below the 200 monthly MA so the fight is between these two MAs now. 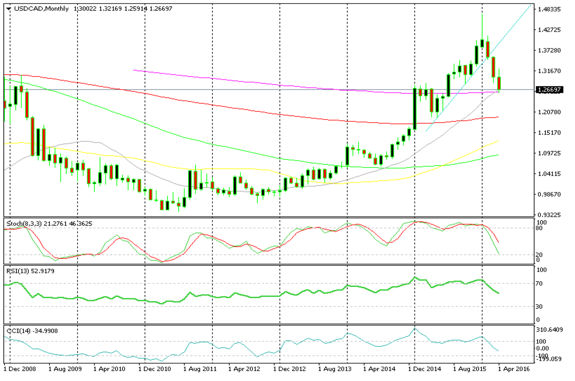 The 200 monthly MA is providing support 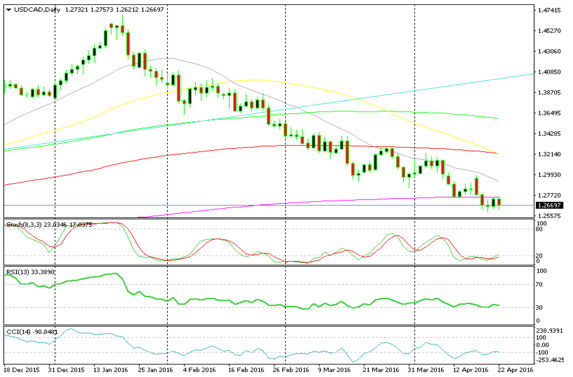 The 200 daily MA is providing resistance

Wrapping up the week

Alright, so we closed the third week of April, again with some very nice profit. The market sentiment turned positive all of a sudden and the irrationality disappeared. EUR/USD declined and USD/JPY surged 400 pips, which is what´s supposed to happen during this times. We thrive when the market behaves in a sensible way and the 357 pip profit is proof. Next week, we have the FED and the BOJ monthly meetings but the attention will be on the latter meeting because they have promised to take action while the FED are not expected to change anything. We will do our best, and hopefully see the third week in a row with profit above 300 pips.