It has been a pretty quiet week for traders, overall. After the FED FOMC meeting minutes were released last week, forex traders were waiting to view the published economic data for hints on what the June interest rate hike decision may be. It´s been a pretty boring week because the price action has been really slow, but we got out with a nice 74 pip profit nonetheless. We have progressed to over 600 pips so far this month and hope that you guys are benefiting from our forex signals. Further below, we will take a closer look into our forex signals performance and into the forex market this week. 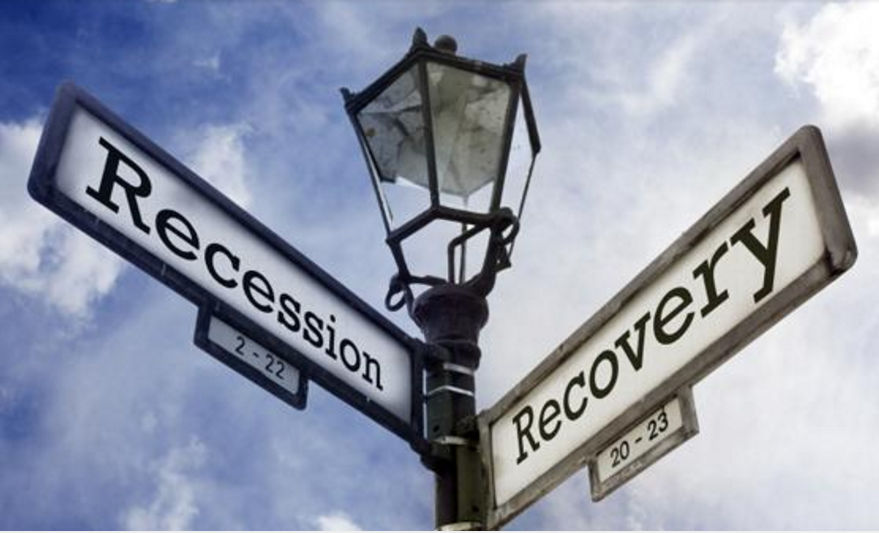 The skies look a lot brighter for the US economic recovery

As we mentioned in the opening paragraph, the price action in the forex market has been pretty slow this week, particularly on Monday and Wednesday. The range in these two days was only about 30 – 40 pips. On Monday, we opened two forex signals but only one of them closed, while on Wednesday there were no closed forex signals and we opened three more. This made us reduce the number of forex signals, or perhaps it’s better to say the opportunities to open enough forex signals were scarce. We opened 13 forex signals this week which is quite low, but the results were satisfying, although not as great as they have been in the past two weeks. 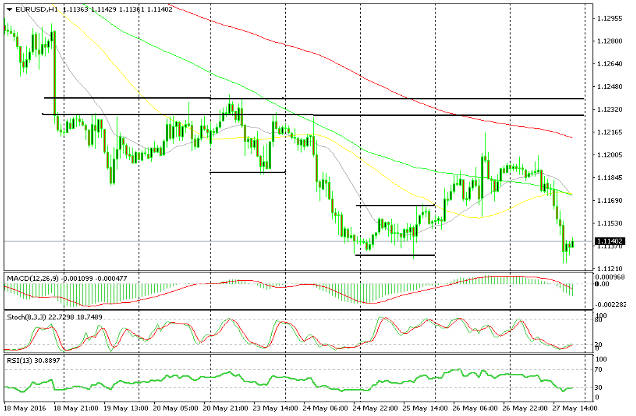 So, we made 74 pips this week which brings our monthly profit to 611 pips so far. We had five losing forex signals this week (out of 13) so the win/loss ratio works out to 62:38. That´s below our long-term average but, still, we closed the week in profit. One of the reasons for the profit hike was the 1.1220-40 level in EUR/USD, which has turned into solid resistance this week. The buyers feared a June interest rate hike and, therefore, they dumped their buy positions every time the price reached these levels – giving the bears the upper hand. That gave us some good opportunities to open sell forex signals against the resistance and we opened all four sell forex signals there… and they all hit take profit!

Last week, the market had a chance to look at what the FED members were saying behind closed doors when the April FOMC meeting minutes were published. The statement in April was sort of dovish but the minutes last week showed the opposite. The odds of an interest rate hike in June jumped up and the bearish trend of the last few months in USD suddenly reversed. But nothing was set in stone and, as always, there was a caveat indeed; the FED wanted to see more positive economic data. So, the market was cautious this week. They were waiting for the US economic data to be published. All data coming from the US was light until Thursday but when they were published they reinforced the idea that the US economy is picking up. Then, came Yellen late on Friday in an interview at Harvard; not many expected any comments on the monetary policy and that´s because she never goes out of the script and is an obvious dove. But, rather suddenly, she turned hawkish and finally accepted that the economy is doing better – she also said that the normal reaction by the FED would be an interest rate hike. The US Dollar took advantage of the week near the highs, with the Euro being the biggest loser in this USD buying spree. Also of note, was the breach in both the UK Brent and US WTI oil to above the $50/barrel level. It slipped back below the $50 level, but at the end of the week it closed very near to that level. Somehow, the Canadian Dollar didn´t take advantage of the advance in the oil price, though.

This week, we´ll review the Japanese and US economic data. The industrial activity posted on Monday missed expectations by quite a bit, and the manufacturing PMI index remains below the flat line which means that this sector is in contraction. The inflation outlook is dim as well because the national and the Tokyo consumer price index (CPI) remains negative and this signals deflation. It suggests that there´s no inflationary pressure because the consumer is hesitating to spend. The US economic data, on the other hand, painted a brighter picture. The unemployment claims came below expectations and the durable goods orders jumped from 0.3% expected to 3.4%, with last month´s number being revised higher as well. The pending home sales also rose by 5.1%. But that wasn´t all, the prelim GDP for the first quarter was revised up to 0.8% on Friday which means the rate hikes are on their way.

EUR/USD has entered a phase of decline since it reached 1.1615 about four weeks ago. This week it started at 1.1230 and that level has provided resistance all week. The 50 moving average (MA) in yellow on the H4 chart added extra strength to the resistance level. On the weekly chart, we pointed out that the 100 MA (in green) was going to be an obstacle and it did prove to be a strong resistance. Now, we can see that the price has moved down for four consecutive weeks after being rejected by the 100 MA. Right now, the price is right at the 50 MA in yellow; it has provided resistance before so it might turn into support now. If it breaks, then the downtrend trend will extend. 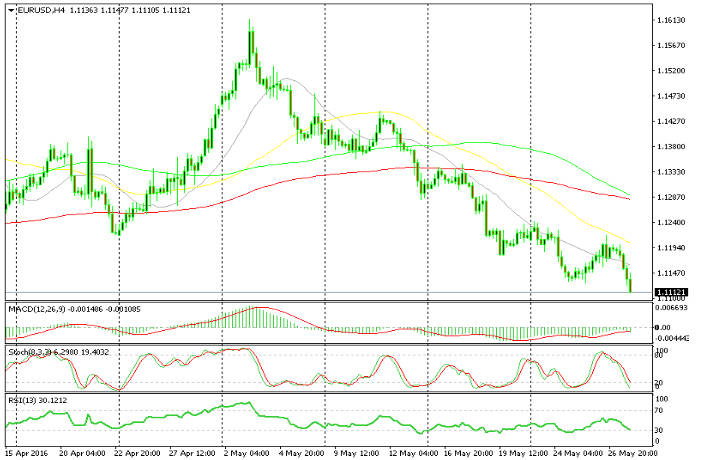 The downtrend is evolving in waves 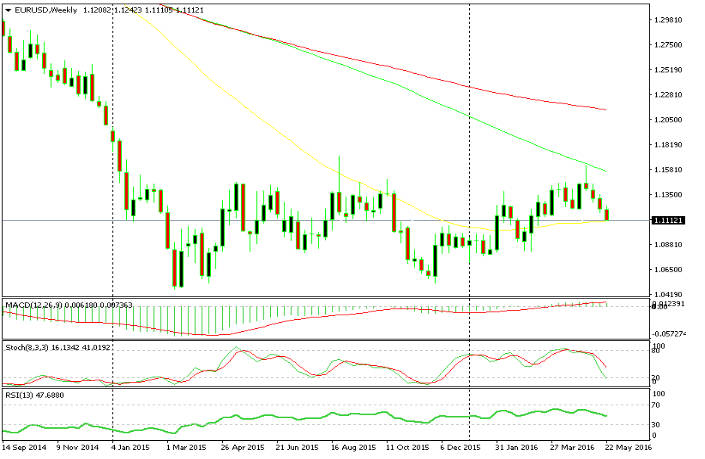 Will the 50 MA in yellow turn into support?

GBP/USD started the week at the lows around 1.4450s. In that area, there was a mixture of moving averages on the H4 chart which didn´t allow the price to move lower. Despite the USD strength this week, the GBP closed the week higher against it. But, that was due to various polls showing that the UK will stay in the EU. On the daily chart, we see that the price is having a hard time moving above the 100 smooth MA in red and it´s trading between that MA and the 100 simple MA in green. Anyway, trading this pair is dangerous right now until the Brexit referendum and we advise you to be cautious. 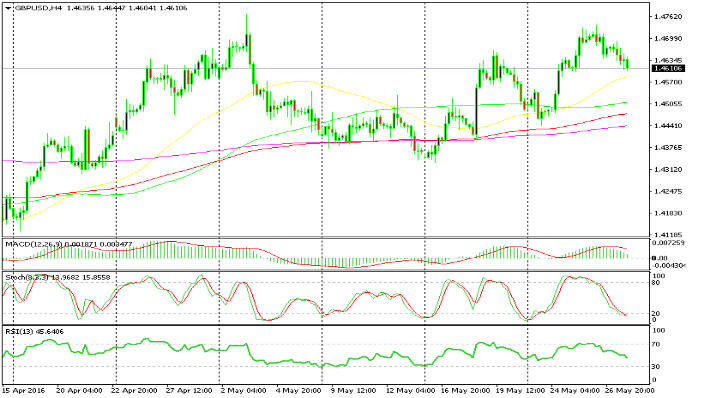 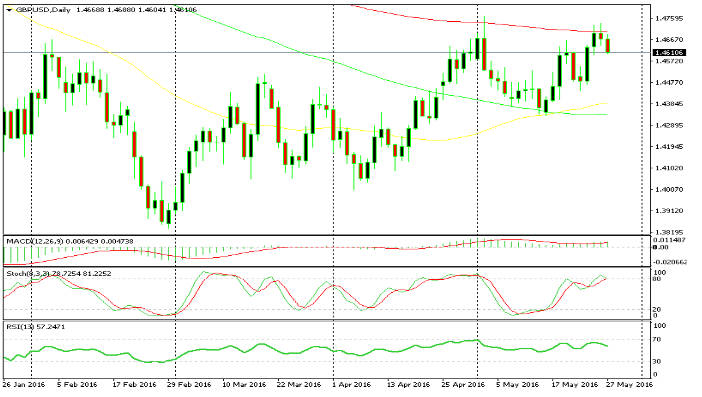 The 100 smooth MA in red is providing solid resistance

The market expectations towards the FED monetary policy changed last week when the FOMC meeting minutes were published. But, the forex traders wanted more evidence that the interest rate hikes are coming. This week, they were presented with more evidence when the goods orders and home sales jumped higher. Even Yellen turned hawkish! We had a good week as well worth 74 pips. Next week, the market will be eager to see the US manufacturing numbers, the non-manufacturing PMI and the unemployment rate.